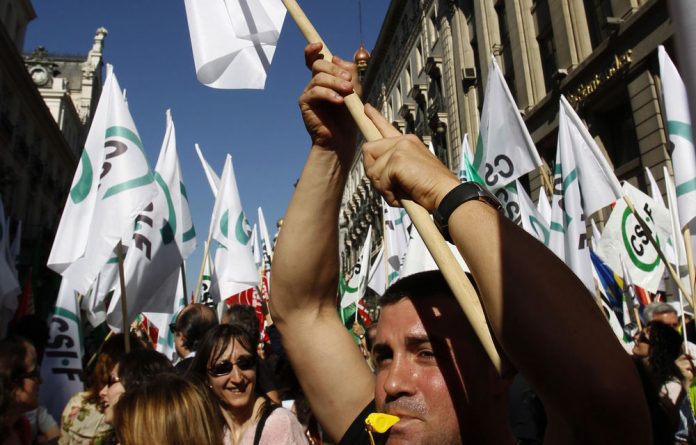 Spain’s minority government teetered on the brink this week amid renewed fears of eurozone debt contagion, as a senior French minister admitted that his country’s top-notch credit rating was under threat.

Stock and debt markets took a battering after last Friday’s decision by ratings agency Fitch to strip Spain of its coveted AAA credit score, the second downgrade in a month.

Weekend polls in Spain showed that support for austerity measures introduced by José Luis Rodríguez Zapatero’s government is evaporating fast, with many voters believing that he will have to call an early election.

Zapatero’s administration, which squeezed a new cuts package through Parliament by a single vote last week, also faces a potential general strike. A deadline to agree to a deal over labour reforms is looming this week.

Pressure on the country’s banking system is also increasing. Spain’s second-biggest savings bank, Caja Madrid, and five smaller lenders were on Sunday night racing to complete talks aimed at creating a €228-billion banking group before the midnight deadline set by the government, which wants Spain’s 45 regional savings banks reduced to just over a dozen.

Investors and economists fear that Spain may succumb to a Greek-style debt crisis, putting the future of the euro in jeopardy as speculators push economy after economy over the edge in a domino effect. Italy, Portugal and Ireland are all seen as likely next targets and even the largest European economies are coming under increasing pressure.

In a television interview with Canal+ yesterday France’s budget minister, Francois Baroin, admitted that “the objective of keeping the AAA rating is a stretch”.

The French government is trying to reform state pension benefits, having already announced that central government spending — apart from pensions and interest payments — will be frozen between 2011 and 2013.

“We must maintain our AAA rating and reduce our debt to avoid being too dependent on the markets and we must do this for the long term,” Baroin said.

In the United Kingdom the weekend resignation of the treasury chief secretary, David Laws, will have attracted the attention of ratings agencies. Laws was a prime mover behind plans to curb public spending to get the public deficit under control and his departure will be seen as a blow to the coalition government.

The agencies have already made it plain that they will be keenly watching the UK’s June 22 budget.

For Spain’s minority government, the most pressing issue is labour reform. The reform deadline, initially set for Monday this week, has been pushed back a week because the government, business and unions could not agree. But Zapatero’s administration has made it plain that if agreement cannot be reached, the government will propose its own changes at a Cabinet meeting on June 11.

Union leaders have warned that if reforms are imposed, rather than negotiated, they will hold a general strike.

A poll conducted for El Mundo, the right-of-centre newspaper, yesterday showed that Spain’s opposition Popular Party would grab a 45,6% share of the vote in an immediate election, 10,5 points ahead of Zapatero’s Socialist Party.

The government has pledged to reduce the deficit from 11,2% to 3% of GDP by 2013, but parliamentary support is waning. Zapatero’s €15-billion austerity plan was narrowly voted through and there are fears that by the time he tries to push through his 2011 budget, in September, support may have vanished altogether.

He would then have to rely on backing from smaller parties, such as the Basque Nationalists. —