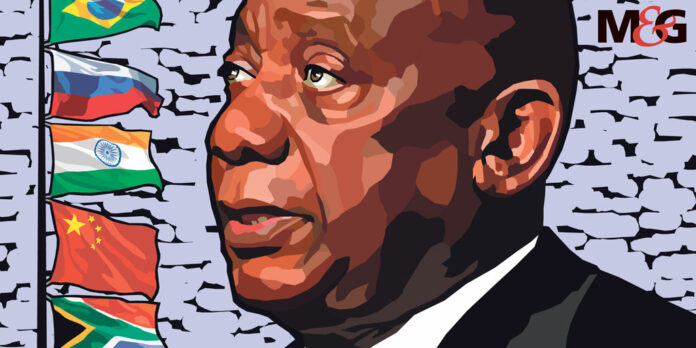 The Brics Summit of 9 September may have seemed a low-key virtual event. But consensus was during moments to do with anti-terrorism and Afghanistan rather than Covid-19 vaccines or China’s presence in Africa.

Socioeconomic themes relating to Covid-19 were led by China’s President Xi Jinping, with not much by way of a Brics collective strategy.

To be fair, President Cyril Ramaphosa did try his best to get real cooperation going on Covid-19, stating Brics needs to “ensure equal access to Covid-19 vaccines … because that is the only way in which we can collectively respond to this pandemic that engulfs the world”. India’s Prime Minister Narendra Modi was supportive, but China, Russia and Brazil (President Jair Bolsonaro, the “Trump of the Tropics”, is an anti-vaxxer) weren’t on the same page.

There’s an irony to the annual Brics summits. The same facts about how influential a force the bloc is in the global political economy are repeated by Xi, who is the only state leader who can really claim this. Each year, Xi reiterates that Brics makes up 42% of the world’s population (close to half), 24% of global GDP and 16% of world trade. This year was no exception.

Annually China claims to be a developing state, while being the second-largest economy in the world. China contributed 18% to global GDP in 2020 (staggering, if we consider Covid-19 originated in Wuhan). This year, statistical predictions are that an extra 1% will be added to that contribution.

The sad-but-true fact is that Brazil, Russia, India and South Africa make up a mere 6% of that contribution to global GDP. This piece of Brics propaganda by Xi that “we have made solid progress towards pragmatism, innovation and win-win cooperation” props up an image of Brics that belies the reality of “[email protected]” when it comes to global GDP contributions.

No matter how much the Brics summit leaders (and our government) harp on about global multilateral institutional transformation (again a theme of this year’s summit) the institutional terrain remains unchanged.

Arguably the institution most critically in need of reform, the UN Security Council, remains unreformed. China weighs in heavily, but not in favour of reform, even if it is mentioned in the Brics annual declarations. While the summit leaders solemnly swear to sing off the same struggle song sheet towards progressive development, it is clear that Brics leaders’ solidarity is mostly skin-deep.

While Covid-19 was a major theme of the summit, regrettably there was no formal multilateral backing of Ramaphosa’s ongoing and admirable efforts to lobby the World Trade Organisation (WTO) for a three-year waiver on the Trade Related Intellectual Property Rights (Trips) regulations, including at the G7 earlier in the year.

Trips, conveniently for Big Pharma, currently prevents the manufacturing of generic Covid-19 vaccines, though both Brazil and South Africa are capable of independent manufacturing.

Instead South Africa, like Brazil, has been given the neocolonial nod to import ingredients from Europe to produce the Pfizer vaccine locally, a move that Lara Dovifat of Médecins Sans Frontières, the humanitarian medical organisation, has criticised, stating this is “clearly not enough to achieve vaccine independence on the African continent”.

The disgraceful bottom line is that neither Russia or China in Brics, nor the US-Europe blocs, have wanted to share their vital medical and technical know-how with the developing world, with devastating effects for Africa, in particular. India, like South Africa and Brazil, has relied on largely imported stocks.

This vaccine apartheid, as Ramaphosa has named and shamed Covid-19 nationalism, inserts a seismic tremor into the hypocritical platitudes of Xi Jinping’s “smooth, solid and sustained progress in Brics cooperation”.

So despite  this year’s harmonious Brics theme of “consensus, consolidation and continuity”, the gaping hole between rhetoric and reality remains.

While Xi pledged to donate 100-million vaccines to the developing world (overshadowed by the US’s President Joe Biden-led donation of 500-million doses just prior to the G7 summit in June), the donations are a drop in the ocean for Africa’s population of 1.4-billion people, of which fewer than 2% have been vaccinated.

The sheer rapaciousness of global Big Pharma aside (Morgan Stanley estimates Pfizer’s profit margin on the vaccine is between 60% and 80%) there’s the pandemic problem of a mutating virus. Had the generic production of vaccines truly been a collective strategy of this Brics summit, just as new Covid-19 variants hit, Brics’ civil society could swallow at least some of the propaganda.

Not that civil society really gets to know much about the Brics deliberations behind closed doors. Aside from a rent-a-crowd group of uncritical NGOs that make up Civil Brics, the rest of the Brics population remains unaware of how its taxpayers’ monies are spent on these annual displays of greenscreen hand-holding.

Each year, critical activists and NGOs known as People’s Brics or Brics-from-Below try their best to deconstruct the Brics narrative, but the tide of propaganda is formidable.

The Brics final declaration underlines China’s and Russia’s equivocal position on vaccines: “We note, inter alia, the ongoing discussions in the WTO on a Covid-19 vaccine intellectual property rights waiver and the use of flexibilities of the Trips Agreement and the Doha Declaration on Trips Agreement and Public Health”. It’s worth noting that Russia’s Sputnik vaccine and China’s Sinovac are also raking in the profits.

China’s and Russia’s posturing on vaccine liberalisation is devoid of altruistic motive. It reminds us of the greed of the big pharmaceutical companies during the HIV/Aids pandemic — a point Ramaphosahas raised in global forums such as the G7.

Despite long touting a vaccine centre (which has not been established though it has been on the table since 2018) no other policy implementation cooperation is occurring on a collective Brics response to the pandemic.

Instead, Brics individual state agendas were amplified, with Putin hardly mentioning Covid, instead honing in on anti-terrorism as a result of the Taliban takeover in Afghanistan, mainly because it’s too close to Russian soil for comfort.

Meanwhile, the week before the Brics summit, Russia and India had official meetings between the Russian National Security Agency’s chief Nicolai Patrushev and India’s national security adviser Ajit Doval, amid much publicity. Russia and China’s differing security strategies indicate that the Brics position on Afghanistan is not as solid as the summit rhetoric would lead us to believe.

China, at least initially, hosted talks with Pakistan’s extremist government in Islamabad in early September, in which mention was made of including Afghanistan in deliberations about stabilising the region.

China and Russia’s different strategies on the Taliban occur at a time when bilateral tensions are close to the surface — China is building a military port base on India’s doorstep in Colombo, Sri Lanka.

What with all the spy-versus-spy drama about the Taliban, there was space only for a nod at the “green tourism” theme in the summit credits, and sadly that’s where the theme stayed.

The grandstanding on Afghanistan by Putin, in particular, on how the US withdrawal has left the international community to clean up the mess of its failed democratic experiment dominated the summit agenda.

Surprisingly, this year Xi was quiet about China’s so-called “Going Out” global expansion geostrategic master-plan, the belt and road initiative (BRI), that has been getting mixed press on the levels of debt that developing states are incurring, which may explain this omission.

However, BRI is likely to dominate at the upcoming Forum on China- Africa Cooperation (Focac), where China usually promises vague wodges of cash to Africa for rail, road and maritime infrastructure, along with its ubiquitous “no strings attached” promises.

Hold onto your hats: the next China in Africa episode will be at a platform near you soon, because Focac is to take place in late September.

In our current Covid-crazy universe (in which the ninth Mu variant has just been discovered) the irony of the Brics summit dreaming post-Covid-19 strategies is darkly underscored.
Despite glitches in the Brics galaxy, its leaders hope to soothe. The global south’s “consolidation, continuity and consensus” mantra for 2021 assures that all is cosy within a Brics bloc replete with Xiplomacy.

Siyavuya Mpinda
Siyavuya Mpinda is a director of a skills development company and a PhD student at the University of the Western Cape with research interests in sustainable development and inclusive economic development.
Facebook
Twitter
WhatsApp
Linkedin

The Gauteng health department’s budget has been slashed in half, resulting in nurses who worked through the pandemic sitting at home while 10 000 posts are vacant
Africa

If you had the opportunity to explore South Africa, to really see it, be confused by it, fall in love with the good, bad...
Advertising