Women must banish men to the margins, Tutu tells Davos 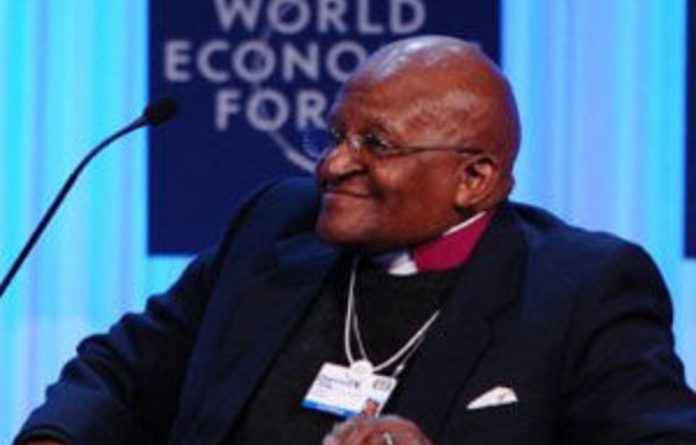 After the uprisings in the Arab world, South African Nobel laureate Archbishop Emeritus Desmond Tutu said on Wednesday that it was time for women to have their revolution and banish men to the margins.

Speaking at a gathering of the world’s political and financial elite in Davos — the vast majority of them men — Tutu said women had long been locked out of policy-making and the world had paid the price.

“Let us re-align forces, let us ensure that women have a significant part in the decision-making process … we have been excluding women,” he said.

Telling the event’s compere Klaus Schwab that he might need a security escort from the podium, Tutu said he was about to upset much of his audience.

“What we need is a revolution led by women. I think women ought to be saying to us men: ‘You have made a mess, just get out and let us in’,” he added.

The fall of capitalism
During talks, leaders of the global business elite were confronted with the fear that the Western model of capitalism had failed and was about to be shoved aside by emerging powers.

Over four decades, the annual World Economic Forum (WEF) in the Swiss ski resort of Davos has become an emblem of the triumphant market but this year delegates admitted that state capitalism on the Chinese model is in the ascendant.

Even political leaders, including German Chancellor Angela Merkel, said it was time for a rethink among European policy-makers.

Four days of public debate and private networking kicked off with a stark warning from a panel of experts that the historic motors of the 20th century global economy will have to reform or die.

“I think we have three to four years in the West to improve the economic model that we have and if we don’t do that soon I think we’ve lost the game,” warned David Rubenstein, managing director of the Carlyle investment fund.

The 62-year-old billionaire has done very well out of financial capitalism, the US firm paid him a $134-million annual bonus this month but he warned that the West needs to get its deficits under control and return to growth.

“If we don’t do that soon, when we are here in three to four years … the game will be over for the type of capitalism that many of us have lived through and thought was the best type of capitalism,” Rubenstein said.

“Let’s get a seat at the table for the real economy. Will the real economy please stand up, because the financial markets are killing you,” she said. “No-one will like the social unrest that will follow.”

But on the same panel, Professor Raghuram Rajan of University of Chicago, warned the 20th century strength of the western economy had already failed to live up to its promises to rich world workers.

“Governments made a ton of promises in the 1960s, when growth was very high. We had the welfare state across the industrial world. And then growth started falling off in the 70s, in the 80s,” he said.

“Some countries, the UK and the US, tried to revive it through deregulation and managed for a while, but in general growth is too slow in the industrial world relative to the promises we have made,” he said.

Dozens of heads of government will join the titans of commerce and industry in Davos to discuss everything from the eurozone crisis to Iran’s nuclear programme as well as trends in science and the arts.

Merkel, delivering the first of the keynote addresses, said Europe “is a continent that needs to debate new methods”.

Marathon impasse
She warned that protectionism was on the rise in the wake of the marathon impasse in efforts to reach a comprehensive deal for world trade.

And she added that structural weaknesses within the 17-nation eurozone had been painfully exposed.

“Nobody will have faith in Europe if unemployment rises”, she added.

Other G20 leaders due to speak in the coming days are British Prime Minister David Cameron and Canada’s Stephen Harper.

They will join a new generation from countries such as Tunisia and Thailand which are trying to emerge from turmoil as well as African heads of state including South Africa’s Jacob Zuma.

While US Treasury Secretary Timothy Geithner will ponder the challenges for the US economy, a sizeable contingent from emerging powers including India and South-east Asian nations will consider: ‘Is this truly the Asian century?’ — AFP

The coronavirus crisis: A failure of policy and leadership