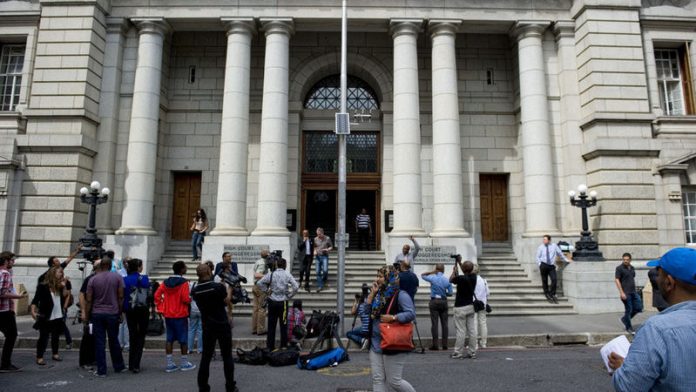 The high court in Cape Town entrance was on Tuesday morning cordoned off with yellow tape ahead of the arrival of honeymoon murder-accused Shrien Dewani.

The tape was tied to a police vehicle at either end. Around 13 police vehicles were parked near the court and a throng of police officers stood at a side entrance where prisoners usually arrive.

Dewani is expected to enter the court through this gate. Traffic cones blocked off the road to the side gate.

Meanwhile, media camera crews set up their equipment in the arrivals hall at Cape Town International Airport and at the high court in the Western Cape before 7am.

Dewani arrived in Cape Town on a private plane after 9am on Tuesday morning.

"He has been transported by a chartered plane from the Bristol Airport in the United Kingdom to South Africa. The department of justice procured the chartered plane," spokesman Mthunzi Mhaga said in a statement.

Security
Among the reasons for the private aircraft was that Dewani had previously shown suicidal tendencies, said Mhaga.

"We took into account the fact that there was undisputed evidence during [the] extradition hearing that he had displayed suicidal tendencies and the South African government did not want to take chances.

"His peculiar medical condition needed to be monitored and the situation on a commercial fight had the potential to compromise it and that would have [an] adverse effect on the pending medical examination in a bid to get him to recover."

Mhaga said there was a need to ensure that Dewani and the team he travelled with – including doctors, nurses and police – were secure.

"…That would have been difficult on a commercial flight with many passengers. [It] had [the] potential to compromise their security as his identity is now well-known," he said. "It was therefore paramount that his return to the country is hazard-free in order to ensure that he eventually makes the court appearance without hindrance."

The millionaire businessperson touched down on a private plane direct out of London's Heathrow Airport.

According to the electronic information board in the arrivals hall, the flight will land at 9.56am. Dewani is set to be transported from the airport to the court where he is expected to appear before Judge President John Hlophe at 11.30am.

Conspiracy to commit murder
The justice department on Monday said Dewani was being accompanied on the flight by a medical doctor, a nurse, and members of the South African Police Service.

When he appears in court, he is expected to be charged with conspiracy to commit murder and defeating the ends of justice.

Dewani claimed he and his wife Anni were kidnapped at gunpoint as they drove through Gugulethu in Cape Town in a taxi in November 2010.

The couple had been on honeymoon in the country. His wife's body was found in the abandoned car the next day. She had been shot dead.

Xolile Mngeni was convicted of the murder and jailed for life.

Prosecutors allege Dewani hired him to kill his wife. Two other alleged accomplices are also already serving jail terms in connection with the crimes. Dewani has denied any part in the murder. – Sapa