How we can restore our ecosystems

For millennia, we humans roamed planet Earth, foraging for food and hunting animals. We took what we could find, as needed, and small groups of hunter-gatherers thrived. Then, about 12 000 years ago, somewhere in the Jordan Valley, in what later became known as the Fertile Crescent, the Neolithic Revolution was ignited. Humans started cultivating plants.

Fast-forward halfway to the current day, and we selected species and varieties that lend themselves to cultivation, and starting monoculture farming. We had begun damming rivers. We had begun breeding animals and allowing them to amass.

Agriculture and pastoral living were established as far as what became known as China and Mexico. The consequent need to remain in one place led to the development of settlements and towns, escalating human activity in localised space.

Overexploitation of soils caused destruction. It did not take long before the fertile soils in the Loess Plateau in China, where Chinese agriculture and thus Chinese civilisation started, were degraded so intensely that it was rendered an arid semidesert.

Human activity does not exclusively affect soil and living organisms; it influences weather systems on a systemic level. Healthy hydrological cycles (remember learning it at school — rain falls, rivers run into the dams and sea, water evaporates, condensates into clouds, rain falls) are critical if humanity is to thrive into the future.

Essentially, there are two components: the way in which water leaves the surface of the earth, and what happens if and when it returns. If soils have been stripped of vegetation and water can no longer penetrate, surface temperatures rise. In these warm conditions, the moisture that leaves the surface of the earth rises too quickly into the upper atmosphere where it can no longer form clouds. When it does rain, the water can’t percolate into the soil, which causes flooding and erosion.

Fast-forward to the 21st century. With advanced understanding of soil, water, sunlight, photosynthesis, microbes, biodiversity and genetics, we have learned that while ecosystems can be destroyed, they can also be restored. We now know how to develop healthy soil, populate it with the right vegetation and manage the hydrological cycle. We can effectively restore ecosystems and regulate the climate.

After October’s Intergovernmental Panel on Climate Change report, the United Nations declared 2020 to 2030 as the Decade of Restoration. But, where we thought we had 11 years for governments to dramatically reduce carbon emissions we now know that the most important decisions will be taken in the next 18 months. We need to act swiftly to mitigate biosphere and civilisation collapse.

In 2012, educator, ecologist and filmmaker John Dennis Liu made a documentary called Green Gold. He filmed the efforts of the World Bank and the Chinese government as they embarked on an ecological restoration project of the Loess Plateau. The documentary covers similar projects in Jordan, Rwanda, Bolivia and Ethiopia. Together with The Weather Makers from the Netherlands and other international organisations, Liu is now set to start a large project in the Sinai Peninsula to restore the heart of the Fertile Crescent to its former state — right there where settled agriculture began.

Greenpop, an environmental organisation in Cape Town, invited Liu to South Africa for a series of panel discussions. Talks revolved around problems and solutions that we face on a global and national scale, as well as at a hyper-local level.

Mark Swilling of the Sustainability Institute said our current situation will lead us “past the point of civilisation as we know it” but that this does not mean that we give up hope. He spoke of a misguided mindset, in which people cannot see past the short-term economic loss of implementing major restoration measures to the much greater long-term economic and ecological gain thereof.

President Cyril Ramaphosa’s 2019 State of the Nation address and Western Cape Premier Alan Winde’s State of the Province address rang alarm bells. Ramaphosa did, admittedly, mention climate change in passing, but both he and Winde propose making more land available for development, some of it for agriculture.

Patricia Holmes, of the conservation ecology and entomology department at Stellenbosch University, warns of a lack of capacity in government, many consultants being either incompetent or corrupt, and that there is no longer an independent public body commenting on environmental impact assessments for developments on ecologically sensitive sites. As a result biodiversity is overlooked and mainstream monoculture farming is given the green light.

On a previous visit to South Africa, Liu made a documentary called Finding Common Ground, in which he showed the water loss and destruction of biosphere caused by expanded farmland in the Baviaanskloof. All of this, says Holmes, comes down to our very short-horizon politics with short-term gains, which seem to win against the longer-term wisdom of conserving irreplaceable biodiversity and our life-support systems. 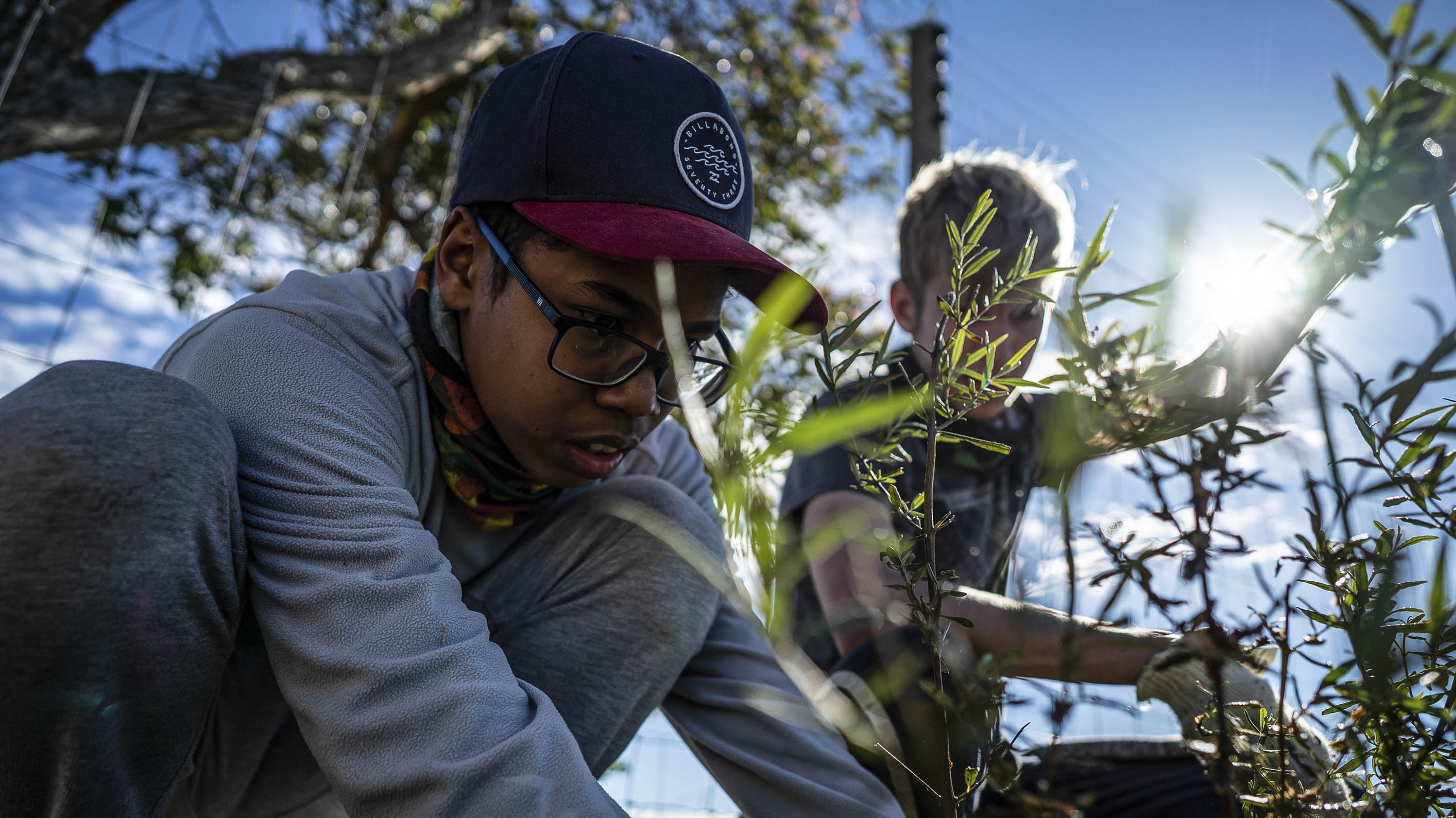 The situation is dire despite our good legislation. “Politicians think the future is not their concern as they will no longer be in power when the worse disaster strikes,” Holmes says.

But there are people in government who can see the light. Jason Mingo, task manager for ecological infrastructure and bioremediation in the Western Cape, says there is a need to show long-term investment benefits to “make sure we sustain our ecosystem functioning and ecological services in the face of climate change”.

Liu’s answer for South Africa? Ecosystem restoration camps, a practical way of creating restorative systems in the face of climate change and social disparity. These are self-organised, self-governing collectives of 30 to 50 people who restore degraded landscapes under the guidance of an elected council. The camps share experiences and knowledge and collaborate across institutions and sectors. Hyper-localised problem solving, in which anyone can participate, is a bottom-up approach that will self-replicate.

“We need to convert the majority of South Africans to fight the same fight,” says Siyabulela Sokomani, of Shoots and Roots Agriculture and a co-founder of the nonprofit organisation Township Farmers. He drew the analogy of how water needs to filter into the earth, and so does the knowledge need to filter into communities. Liu agreed, saying that the “answer should be found not by an individual but by a collective gathering”. Regenerative farmer Angus McIntosh says “everyone chooses a farmer every time they eat. Vote with your fork.”

This debate is seen largely as a white, privileged, leftist and “hippie” movement, but Sokomani had answers relating to issues of integration. There are many people, in both affluent and underprivileged societies, who either do not know about the problems we all face and how to solve them, or do not care. But those that know and care need to spread the knowledge; those with the financial ability need to fund the ecological restorers in areas such as townships.

Seeing that there is gainful employment in the ecological economy will encourage the youth to participate in it. We need to rehabilitate projects that are no longer functioning, find out what went wrong and be sure to include the right people in the elected council. Sokomani says kickstarting such projects in townships is the best way of starting a movement. “Imagine our people toyi-toying for restoration,” he laughs.

On the question of access to land, Swilling pointed out the need for a change in ownership systems away from the market-centric and state-centric paradigm. Liu believes that people will give access to their private land if the ecosystem restoration camps model “claims no ownership” and only needs access to the land to do the restorative work for about three months per site.

Cormac Cullinan, of Cullinan & Associates and the author of Wild Law, pointed out how the legal system is outmoded, and agrees on the need to build a grassroots movement first. Though these issues can be solved only on a systemic level, “subsidies going to mainstream agriculture [should be] shifted to permaculture or restorative farming”.

At the heart of Liu’s philosophy is a view that our mercantile system “is a bit mad. We place value on the commodities that are plucked, harvested, processed out of the ecosystem, but do not seem to place any value on the ecosystem itself.”

He spoke about the need to move away from our extraction and transactional economy to an ecological economy, in which ecosystem function is held central. Greenpop director Misha Teasdale adds: “It’s not only imperative; it’s also possible.”

Liu says that at the very least food should be taken out of the transactional economy. “We need to look at the natural systems and realise they are of value, things are not.”

The economy has “disadvantaged billions of people” because, he says, it has basic inequities built into it. “South Africa has an opportunity to delve into this because of your unique history, and if you get it right you will lead the world in a way that is important and necessary.”

Scone Malone is a mycologist, maths teacher and writer

The Indomitable Lions’ class of 1990 put Africa on the international football map with their showing in Italy, where they stunned the world champions. But they have since gone backwards. Why?
Read more
Top Six

In this edited extract from The Backroom Boy, an autobiography of the late Andrew Mokete Mlangeni by Mandla Mathebula, the ANC struggle stalwart meets Mao Tse-Tung while in military training in China
Read more
Advertising
Continue to the category
National