Tunnels beneath Vegas a refuge for the homeless 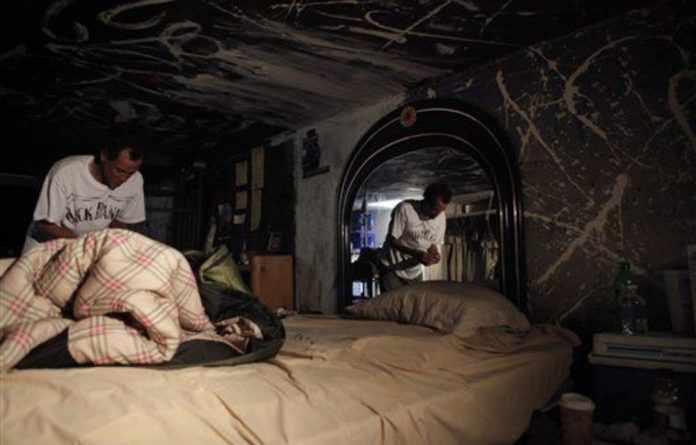 Underneath its glitzy casinos, far from the bright marquees, there is another Las Vegas, a pitch-black, dank underworld virtually unknown and unseen by those who live, work and play above.

About 300 people — mostly men battling demons of various addictions — live in the underground storm system built to protect the desert playground from the infrequent cloudburst.

There’s no sign or word of welcome down here. Drug use is nearly universal. Most people carry makeshift weapons and the police don’t often come unless they’re called.

But the denizens have found a haven in the labyrinth of concrete tunnels that snake beneath the city and its suburbs.

Urban netherworld
In a place where total darkness can be just one bend away, visitors to this urban netherworld stumble across the unexplainable. A beat-up teddy bear lies next to a dirty chef’s knife propped up against a wall. Graffiti turns into murals near sparse pockets of light.

A scruffy black cat’s meow is startling as it scrambles in a pile of junk to escape a flashlight’s beam. The echoes of footsteps change as boots hit standing water, or accidentally kick empty beer bottles as they tiptoe past midday sleepers. Foetid smells of rubbish, dirty water and wet cloth waft through the corridors.

Each subterranean encampment can be as spartan as a few worn blankets, or as elaborate as an apartment fitted with queen-size beds, dining utensils and knickknacks.

“You’d be surprised the things that wash down in this channel … it’s hard to even describe,” said Rick “Iron” Cobble, a 45-year-old Oklahoma native, who sleeps in a 1,5m-high tunnel near the south end of the glittering Strip, not far from the “Welcome to Fabulous Las Vegas” sign.

Cobble, battling severe drug addiction while living near a mound of washed up garbage, said his only belongings are a small mound of blankets and his clothes.

“Right now I’m just trying to survive,” Cobble said. “That’s the only way you can put it.”

Rich Penksa, a retired correctional sergeant who began traversing the tunnels earlier this year for a non-profit’s homeless outreach, said he first heard about the tunnels years ago from prison inmates who told tales of living under Sin City when not behind bars.

“I don’t think I’ve ever felt odder than when I’m down in that tunnel environment,” said Penksa, who once encountered thousands of spiders feasting on the baby mosquitoes multiplying in standing water. Penksa frequents the tunnels for Help of Southern Nevada, which is working to place tunnel residents into more conventional homes.

What started as a piecemeal set of individual drains is now part of a 1  600km maze of pipes, washes, basins and open channels, said Betty Hollister, spokesperson for the Clark County Regional Flood Control District that built the system. Local jurisdictions maintain it using sales tax money at a cost of $7,9-million last fiscal year.

About 320km of the system — mostly built since 1986 — are underground drains ranging from 6oocm-pipes to 3,6m-high, 6m-wide reinforced concrete boxes that shape channels, Hollister said.

‘Out of sight, out of mind’
The people who call these tunnels home — mostly men ages 35 to 50, are a distinct breed, Penksa said.

“Even the folks that are homeless above ground are very leery of the inhabitants of the tunnels. They’re kind of feared,” he said.

Annie Wilson, homeless liaison for the Las Vegas Metropolitan Police Department, said officers usually only go into the tunnels when they are called or if they are doing homeless outreach.

Penksa said he has encountered a few children and women living alone below, but no families.

Eric D, a 40-year-old New Yorker who has spent the past five years sleeping between four tunnels near various casinos, said he’s largely left alone in these desolate hallways — leaving him free to use drugs.

“Down here, we’re out of sight, out of mind,” he said. “Which is cool with me because that’s the way I prefer it.”

Eric, who asked that his last name not be used, said people end up in the tunnels for a lot of different reasons — he’s addicted to methamphetamines and marijuana.

“This is the worst situation anybody could ever be in, and I did it to myself,” he said.

Eric said the pitch black passageways are livable if you’re not claustrophobic, don’t mind cockroaches or black widow spiders and can tolerate “nasty” smells that get worse when things get wet.

Even small amounts of rain make the tunnels dangerous.

“When the water comes, if you’re not ready for it, it’ll take you,” Cobble said. “It’s not like a little trickle.”

The drains and 82 basins work together like bathtubs, with rainwater filling basins then draining through large output pipes, Hollister said. The system, driven by gravity, propels water east to Lake Mead. The change in elevation from Red Rock Canyon — 850m — means water can travel as fast as 50km/h through the tunnels with levels rising as much as one foot per minute, Hollister said.

Eric is known as the weatherman among his tunnel neighbours because he spends hours watching television in the casinos’ sports books and keeping up with weather forecasts.

“I’ve seen these things fill all the way to the roof,” he said.

“If somebody doesn’t watch the weather, and you get caught, you can lose your life in here.”

Fortunately, Las Vegas went 347 days without any rainfall in 2009, and had only five days where at least 0,3cm of precipitation fell. Still, since 1960, there have been 31 flood deaths in the city, according to the flood district, including five deaths since 1992 believed to be homeless people.

Matthew O’Brien, a writer who began exploring the tunnels in 2002 and wrote a book about them published in 2007, said people live in the tunnels for a wide range of reasons, including to get out of the desert summer heat that easily passes 100 degrees.

O’Brien said the vast majority are addicted to either drugs, alcohol, gambling or some combination of the vices.

“In these tunnels, no one bothers you, no one harasses you — there’s a permanence,” he said. “When you leave and come back, you know your home’s going to be there in the tunnel.”

O’Brien said the tunnel residents largely live off the excesses of the casino corridor by panhandling or cashing out unplayed slot machines — a practice known as the credit hustle.

Eric says the hustle, while once lucrative, has become less reliable as Sin City battles a harsh economic downturn keyed by deteriorating tourism.

“The money, up until I’d say three years ago, was just too good to not do it. I literally averaged $150 a day cash money in my pocket,” Eric said. “And when you have a speed habit like I did and you have a marijuana habit like I do, it was the greatest thing in the world.”

Eric said he’s hoping to get out of his concrete home soon, and would likely be out already if not for his marijuana habit.

“I have to make right with my family and I don’t want them thinking I’m going to spend my whole life living like this, like a bum,” Eric said. “Fifteen years of doing the same monotonous, dumb stuff, it’s time I gotta do something right for myself. I can’t do
it no more, I’m so tired of being who I am.” – Sapa-AP