The elephant that caused all the trouble 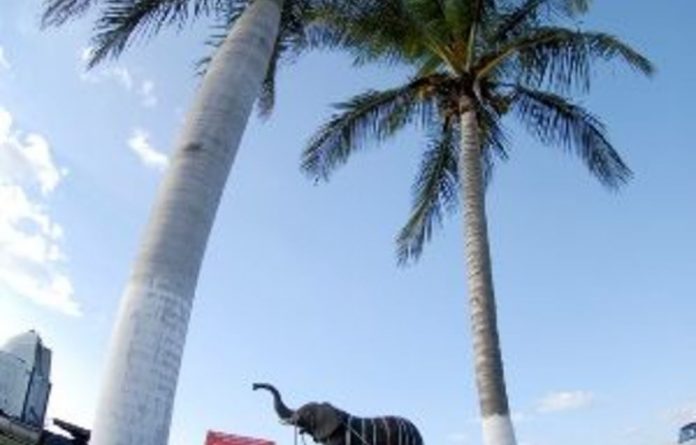 An iconic public artwork planned for Durban at a reported cost of R1,5-million has been scuppered, allegedly because the trio of elephants are reminiscent of the opposition IFP’s logo in the ANC-run city, the Mail & Guardian learned this week.

Politics and the arts are never comfortable bedfellows, and the project has now been put on hold, following an objection from an unidentified official.

Durban city manager Michael Sutcliffe on Tuesday claimed the project had been stopped ‘to allow for me to receive a report on the process followed”.

He did not answer subsequent questions on the exact nature of the report.

Internationally acclaimed local sculptor Andries Botha was commissioned to produce the massive pieces as the first part of a R500-million upgrade of Durban’s new Warwick Avenue interchange, and was paid part of his fee. However, the three elephants, made of steel and stone, seemed to have reminded some local officials of the symbol of the Inkatha Freedom Party (IFP), the ruling African National Congress’s (ANC) long-time rival in the province.

Political headache
The sculptures cost R1,5-million, according to the Mercury.

While several sources told the M&G that due processes were followed before the work began in November 2009, the city may claim the project was not properly authorised to rid themselves of the political headache it has caused.

Head of international and government relations in the Durban municipality, Eric Apelgren, first suggested the project. He told the M&G that he had been impressed with Botha’s project — a series of life-sized elephant sculptures that have been placed in significant public spaces around the world — including Antwerp, Marseilles and Paris.

On Apelgren’s recommendation, Botha made a presentation to various committees, and was asked to create the public art work that would be placed at the new Warwick Avenue interchange, an area undergoing significant revamping in preparation for the Soccer World Cup.

Botha is a world-renowned sculptor based in Durban whose work has appeared in exhibitions around the world. The series of elephants, made out of natural or recycled man-made materials, are a symbol of the Human Elephant Foundation, an organisation he started in partnership with respected South African conservationist Dr Ian Player. The foundation aims to highlight the interaction between humans and the natural environment. The elephants have appeared in various permanent and temporary positions in Mexico, Belgium, Norway and throughout North America.

The IFP logo. Work began in November 2009 and the three elephants were transported from Botha’s workshop north of Durban to their current location in early January, where they were to be finished on site. On February 9, Botha said he received a phone call from Siya Madlala and S’bu Mazibuko, two former students who were assisting him with the artwork, saying that they had been ordered to stop work immediately by a man who refused to identify himself. The man, driving a large black SUV, apparently told them that the elephants were a symbol of the IFP, and were therefore not welcome in a city run by the ANC.

Botha, fearing for the safety of his workers and the artwork, asked Rumdel Cape, the contracting company assigned to Warwick Avenue redevelopment, to provide extra security. Soon after the incident, however, Botha received an order from Rumdel Cape to ‘cease all activities concerning and related to the elephant construction on the Warwick Viaduct site until further notice”.

According to Botha, he has been given no reason for the work stoppage, and has received no further communication.

Sutcliffe said that Botha “will be formally communicated with once I have established all the relevant facts and a process to deal with the matter has been adopted”.

‘The elephant goes beyond the IFP’
Thembi Nzuza, leader of the IFP caucus in eThekwini council, said the brouhaha surrounding the elephant sculptures was “ridiculous and childish”. 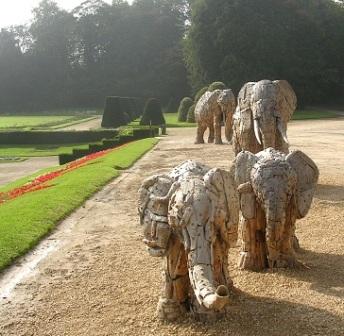 Installations of Botha’s elephants in Belgium. “We, as the IFP, are actually taking offence by the municipality’s behaviour — the elephant goes beyond the IFP and is part of greater South Africa. Where will all this end: The DA uses the sun on its logo, so will the ANC next try and stop the sun from rising?”

“The ANC in Durban is driven by one man — John Mchunu, the regional chairperson and it seems we have to all massage his super-ego,” said Nzuza, when commenting on who might have been behind the decision to stop work on the sculptures. Nzuza said the matter had not come before either the council nor the city’s executive committee, or exco.

Sutcliffe meanwhile denied that politics were to blame for the intervention, and said that the reports of the apprentices being told to stop work on what could be seen on an IFP symbol were ‘not applicable”. When asked why it had taken so long for objection to be raised, seeing that the project had been started in November 2009, a contractor had been appointed and that money had already been spent on the project, Sutcliffe’s only answer was: ‘Not true, not applicable”.

John Charter, Botha’s partner at the Human Elephant Foundation told the M&G this week that he had approached Sutcliffe at a cocktail party and asked why the project had been stopped. 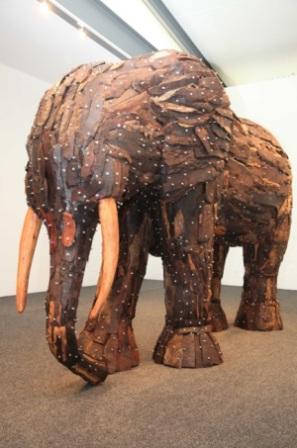 Lux Themba, 2008, The Netherlands. Meanwhile, ANC officials in the area have tried to justify the interference. Durban deputy mayor Logie Naidoo said on Sunday that the city had wanted sculptures of the Big Five, but Botha “only did elephants”, the Times reported.

But Charter said the statement sounded illogical. “The whole concept of the foundation has always been about one animal: the elephant as a metaphor. When the city approached Andries [Botha] he gave them a big spiel about the foundation and the elephants.”

He said the Botha chose to use three elephants as that number worked best in the space at the new development.

At the moment, the sculptures stand hidden under green shade cloth and black plastic.

“They’re on a major causeway at the end of a main road, no one can just put them there without permission,” said an irate Botha, who fears that the situation will jeopardise the symbolism of conservation.

Support has grown for the artist and a Facebook group called ‘Save the Durban Elephant Sculptures” has been started, with members lamenting the intrusion of politics in art, stating that: “Art is art. An elephant is an elephant.”

Botha said that political interrogation of creative expression ‘puts everything at risk”.

‘I just want the dignity of the artwork restored,” he said.

The IFP’s Nzuza said his party would pursue the matter if work on the sculptures were stopped indefinitely. “This is a fruitless waste of money”. — Additional reporting by Niren Tolsi

Lisa Van Wyk
Lisa van Wyk is the arts editor, which somehow justifies her looking at pretty pictures all day, reading cool art and culture blogs and having the messiest desk in the office. She likes people who share her passion for art, music, food, wine, travel and all things Turkish. She can't ride a bike, but she can read ancient languages and totally understands the offside rule.