A licence to plunder 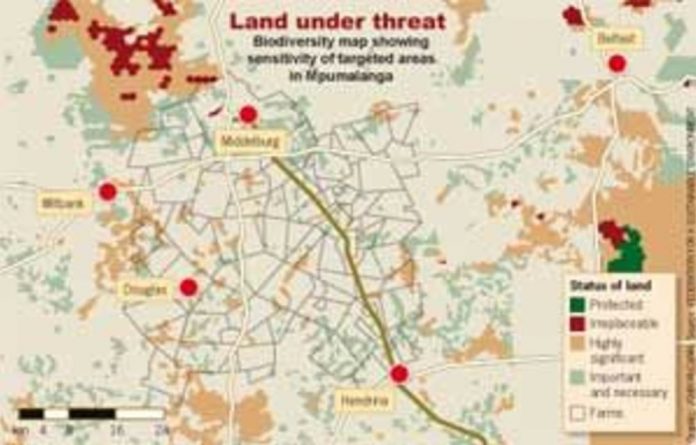 The state mining company that stirred up a hornet’s nest by targeting prime Western Cape wine estates has applied for prospecting rights on more than 273 properties in Mpumalanga — some of them in important and environmentally sensitive catchment areas.

In most cases African Exploration Mining & Finance Corporation plans to prospect for coal.

Environmentalists are deeply concerned about the rate at which the state-owned concern is capturing prospecting rights, particularly as it seems to be governed by a different set of rules that may exempt it from environmental scrutiny.

“It’s a big concern that the state is both referee and player here,” said Koos Pretorius, coordinator of the Mpumalanga-based Federation for a Sustainable Environment. “We’re concerned about the company’s operations.”

African Exploration is apparently eyeing the environmentally sensitive Wakkerstroom area, where it boasts of having prospecting rights.

In July last year the Mail & Guardian reported that ex-mining minister Buyelwa Sonjica had published a notice in the Government Gazette exempting African Exploration from key provisions of the Mineral Resources and Petroleum Development Act governing applications for prospecting and mining rights.

The company was exempted from sections 16, 20, 22 and 27 of the Act, allowing it to prospect and mine for any mineral without applying for the right to do so, if that is deemed to be in the interests of “security of supply”. It may also be exempt from carrying out environmental studies.

Legal experts attacked the special legislative dispensation, complaining that the state company had been given an unfair advantage over private-sector counterparts.

Mngomezulu , who was appointed to Mintek at the end of 2008, said in an interview that he wanted the company to emulate Vale do Rio Doce, the Brazilian state-owned mining company. The M&G understands that African Exploration is now seen as the vehicle to achieve this.

Last month the presidency said that the government had “resuscitated” the company to hold all exploration and mineral rights for the state and engage in mining.

Mngomezulu’s time in the minerals department means that he possesses vital information about where to apply for prospecting licences.

African Exploration, established in 2007, is also active in Limpopo’s Lephalale area and has expressed an interest in uranium mining in the Northern Cape. When it was launched the CEF gave it R180-million for exploration over the following three years, but its budget is understood to have grown.

Mpumalanga sites under consideration include an open-cast coal mine and an underground coal and torbanite mine, Madondo said.
The company’s moves to prospect in the winelands have sparked a furore, with wine farmers vowing to fight them. Prime wine farms such as Jordan, De Grendel, Hoog­gelegen, Langverwacht and Haasendal are in the company’s sights.

However, Business Day reported on Thursday that the department of mineral resources would not approve the winelands application by Africa Exploration.

Outraged farmers say they learned about the prospecting rights only after the minerals department accepted African Exploration’s application on January 13.

Gary Jordan, the wine estate owner who is leading the anti-mining charge, said the company was required to notify landowners in writing, consult them and submit the outcome to the department before February 12.

“No Afrikaans newspapers were advertised in at all — most farmers and farmworkers would, therefore, not know about the application,” he said. “Of the 71 title deed-holders in the Stellenbosch region, only eight were supposedly approached and, of those, most will attest that they never received any information.”

Only two parties registered their opposition before the deadline.

Inge Kotze, project coordinator of WWF’s biodiversity and wine initiative, said her organisation “does not understand the … the economic value of mining these … sites”.

“We question [African Exploration’s] role in this regard,” she said. “While mining is an important component of the South African economy, it cannot override longer-term, more viable economic, social and environmental land uses.” Kotze pointed out that the target area is part of the Cape Floral Kingdom.

Madondo did not respond to repeated M&G attempts to get comment, but told Business Day last week that his company would not back down. “This is still an application and anyone has the right to raise an objection about it. We are still going ahead with the application and it is only the [department] that has to make a determination.”

Mngomezulu said Mintek and African Exploration had no relationship. He was merely a non-executive director who gave “guidance” to the latter. He said the government’s current audit of state mining assets would give direction to African Exploration’s future and determine whether it would become the state’s sole mining vehicle.