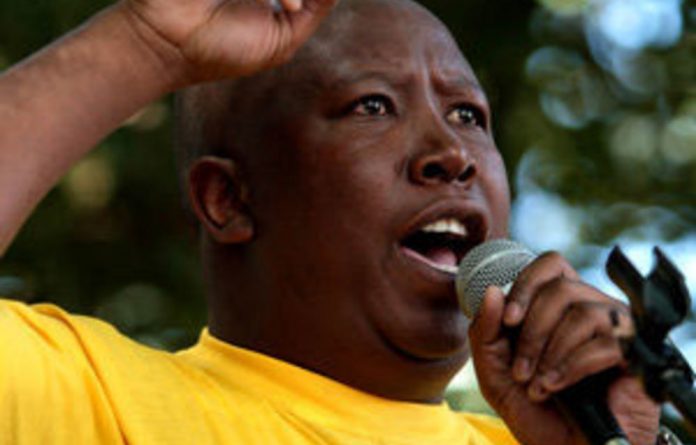 The Mail & Guardian has learned that at Monday’s national working committee meeting, Malema’s supporters will tell Zuma that he was wrong to criticise Malema in public. It is understood that the committee members who are unhappy with Zuma’s public reprimand include Deputy Police Minister Fikile Mbalula and ANC national treasurer
Mathews Phosa.

Some of Malema’s backers argue that Zuma’s criticism was coloured by Cosatu’s claim that some leaders ­– implying the Malema-Mbalula axis — are planning to topple Zuma at the ANC’s 2012 conference.

But a call for disciplinary action to be taken against Malema will top the agenda of the 28-member committee when it meets. Possible charges include his defiance of the ANC by continuing to sing “kill the boer” struggle song after the party had agreed to suspend the singing of songs that could cause disharmony; that he endorsed Zanu-PF and attacked the Movement for Democratic Change as a “Mickey Mouse party” during his visit to Zimbabwe; and that he had embarrassed the party by verbally abusing a BBC reporter, Jonah Fisher, and ejecting him from a media conference last week.

The ANC’s leadership is far from united on the matter of criticising Malema. The Umkhonto weSizwe Military Veterans’ Association and ANC Women’s League president and Basic Education Minister Angie Motshekga are preparing to come to Zuma’s defence.

Kebby Maphatsoe, the association’s chair, told the M&G: “When you make statements in public and the head of the organisation criticises those utterances in public, you cannot say the president is wrong.”

‘Ill discipline’
Declaring that the association frowned on “ill discipline”, he argued that no one could tell the ANC ­president to wait for a meeting to
raise concerns.

Zuma’s reprimand was not personal and could have happened to any party member who “violates the culture of the party”, Maphatsoe said.

If Zuma had kept silent about Malema’s outbursts last week, it would have sent the message that he was “not in command”. “The president is in charge. If he isn’t speaking, it is as if we don’t have an organisation,” Maphatsoe said.

Motshekga, who said she was speaking in her personal capacity, echoed these views. “The president has the right in terms of his position to deal with this according to the way he sees suitable,” she said.

Zuma’s action had been driven by the unstable situation in the country created by unhappiness with Malema’s singing “kill the boer” and the subsequent murder of Afrikaner Weerstandsbeweging leader Eugene Terre’Blanche.

“My understanding is that the president responded in that manner because his [Malema’s] utterances were poisoning the environment. It was really to calm the situation.”

She said that if the criticism was just of Malema Zuma could have easily picked up the phone and called him.

Despite reports of an anti-Malema demonstration at last weekend’s Youth League conference in Limpopo, the league appears to be solidly behind its president in the current row.

League spokesperson Floyd Shivambu said Zuma’s public stance had surprised him. The league had agreed with ANC officials after an incident in which the league publicly attacked ANC deputy president Kgalema Motlanthe last year that leaders should refrain from open mutual recrimination.

“We were not aware that Zuma can condemn any leader of the ANC in public,” said Shivambu.

A Youth League leader in Gauteng, who asked to remain anonymous, was scathing in his condemnation of Zuma, saying he should be reminded that Malema had risked his credibility on several occasions to defend him.

‘One of our own’
“Zuma has committed so many mistakes but Malema has always defended him. We treated him as one of our own.”

He said Malema had come to the president’s defence in situations where he sometimes “appeared ­indefensible”.

“Take Zuma’s extramarital affair with Sonono Khoza — Julius stood by him throughout. When he wanted to resign at the last ANC national ­general council, the youth league stood by him.

“Where does he get the moral high ground to address Malema the way he did? There are avenues in the ANC to do this.”

He said that Malema was a good leader who lacked effective advisers. “He raises crucial issues that no one in the ANC has raised before [but] he does not have good strategists who can put the issues into context. People who bring him down are those who hang around him.

“We’re not saying Julius is the messiah. If people believe he is a monster, they created him as one. It cannot be that, because things are now going well for JZ [Zuma], Julius is the ­villain.”

The league insists none of the potential charges against Malema will stick. It argues that the youth league delegation had visited Zimbabwe with Zuma’s blessing and “he should have told them not to go if he didn’t want them to” and the offending song had been sung outside South Africa.

League leaders also defended Malema’s verbal attack on Fisher and his expulsion from the conference, saying that the journalist had provoked him by calling him “a moron”. Despite this, he had realised his mistake and publicly stated that he regretted the incident. Also, he could not be expected to keep quiet when he was being blamed for the murder of Terre’Blanche.

Mbalula refused to comment, saying he was not prepared to discuss internal ANC matters through the media. “I will raise my views through internal structures of the ANC,” he said.

Zuma has long been accused by detractors and opposition parties of failing to reprimand Malema for his careless public statements because of the political debt he owes the youth leader.

The transport minister uses humour, which his targets don’t find funny, to survive in tough times or to divert attention from a problem.
Read more
Politics