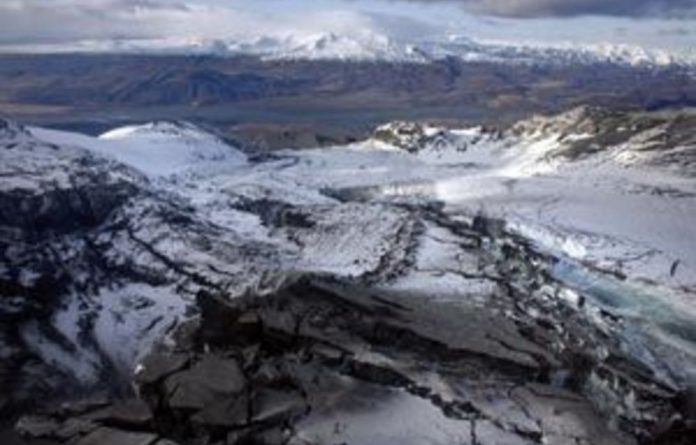 Just after midnight, two Saturdays ago, Hafsteinn Jonsson’s 15-month-old daughter woke up and began to cry. As he switched on a light at their farmhouse in southern Iceland and went to comfort her, the phone started to ring.

He cursed whoever it was calling so late, but then his mobile went off, and he was trapped for a moment on the landing, torn between whether to go to the landline, the mobile or his daughter. And then his wife’s mobile began to ring too. “When I heard that, I knew it had started,” he said.

Hafsteinn’s dairy farm is on the plains below the Eyjafjallajökull icecap and the volcano that lies beneath it. It hadn’t erupted since 1823, but like his father and grandfather, he knew that an eruption could melt the ice and send devastating floods down the mountain. “I ran outside and saw the sky had turned red, then went back and I told my wife: ‘We’re leaving, right now.'”

Eight days later I’m speeding across the icecap on a snowmobile, one of about 20, closing in on a plume of smoke that marks the still exploding volcano. Thankfully, the floods never came and, after 24 hours, Hafsteinn’s family, with around 600 other evacuees, were allowed to go home.

And then the tourists started arriving.

“Within 24 hours of the eruption, I was getting emails from around the world asking about flying up to see it. We’re just a small company, but we have to catch the moment.”

No one can say how long “the moment” will last, but locals expect the eruption to continue for at least several more weeks, possibly months. I met Birgir and Hafsteinn before my snowmobile trip at the Hotel Ranga, which sits alone amid miles of empty plains and farmland, but is now a hive of cosmopolitan activity. Birgir has moved two helicopters from Reykjavik airport to the lawn outside and is coordinating up to 16 flights a day from a tiny desk next to reception.

In the lobby I meet a group from Hong Kong and couples from Russia, the United Kingdom and New Zealand. The day before 23 Americans flew in from New York on three private jets for a 24-hour volcano visit.

I’d come with Discover The World, a British tour operator that operates a “volcano hotline”. Travellers who sign up are called as soon as a volcano erupts and offered a trip to see it. The first to Eyjafjallajokull left the United Kingdom about 48 hours after the eruption began.

Back up on the glacier the sun is setting, making the ice shine a glorious pink, but sending the temperature plummeting to -20C. From a few miles away we first catch sight of the crater, spewing fire into the darkening sky, and we stop to take photos. This is dramatic enough, but our guide motions at us to start up the snowmobiles again and we head closer. Suddenly, we crest a rise, the ice turns from white to ashen black, and the fiery crater is there before us, no more than 500m away. The sight is mesmerising, but oddly familiar from films and TV — you have to remind yourself this is for real. The sound is thrilling and unexpected though, a succession of low booms as the lava explodes up 100m into the air, then comes crashing to Earth.

The crowd of 50 or so onlookers is enthralled, the spectacle so beautiful that it’s easy to forget the danger, but no one really knows what will happen next. Last Wednesday a new crack in the volcano opened up and 50 tourists nearby had to be helicoptered to safety, unhurt but shocked. Locals are more concerned that the eruption may signal the reawakening of Katla — another, far more dangerous volcano, nearby.

Every time Eyjafjallajökull has erupted in the past, it has been followed within a year by the eruption of Katla. And although the floods were averted this time because Eyjafjallajökull erupted from a new crater, by chance located in a small gap between the icecaps, Katla’s 8km-wide crater sits beneath 648km2 of packed ice.

If it blows, the floods will wipe out farms, roads and bridges and could block aviation routes between Europe and the United States.

After half an hour of watching the crater — my hands are so cold I can no longer press the camera shutter — we are collected by one of Birgir’s helicopters. As we soar upwards, we can see the river of molten lava, which snakes away for several kilometres, at one point forming a hraunfoss, a waterfall of molten lava. Beyond, a string of tiny lights marks the scores of 4x4s being driven up for a night-time view of the best fireworks display on Earth.

A mere 15 minutes later we touch down back at the Hotel Ranga, just in time for a late dinner. As we eat puffin, sweet Icelandic langoustine and mountain lamb, the previous four hours are at risk of seeming like a strange dream, except for the reminder in the middle of the table — a shiny black chunk of lava, freshly minted from the bowels of the Earth. —