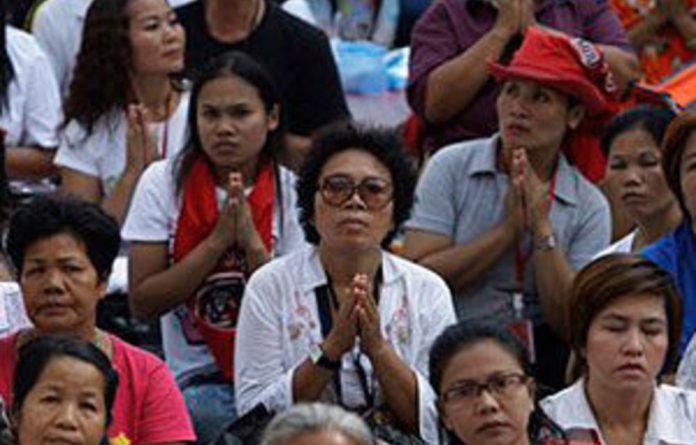 Thailand’s pro-establishment “Yellow Shirts” called on Monday for the imposition of martial law to end mass anti-government protests by the rival “Red Shirts”, warning they may take action themselves.

The Reds were on alert for a crackdown by the security forces on their fortified camp in the heart of Bangkok, where tensions remained high after a grenade attack late on Sunday on the house of a former premier injured 11 people.

Twenty-six people have died and almost 1 000 have been injured in the capital this month in Thailand’s bloodiest civil violence in almost two decades, despite a state of emergency in Bangkok and surrounding areas.

The Yellows, formally known as the People’s Alliance for Democracy (PAD), have said they will take action to “protect the country” if authorities do not deal with the thousands of anti-government “Red Shirt” protesters.

A one-week deadline set by the Yellows for an end to the crippling protests expired with no end in sight and the movement called on its supporters to begin their own peaceful demonstrations.

“The prime minister knows well that in this situation military measures are needed because it was hard to resolve it through politics,” said Suriyasai Katasila, spokesperson for the Yellows’ New Politics Party.

“There should be an announcement of martial law,” he said. “If the situation does not improve, PAD will consider intensifying its measures.”

Appearing on national television on Sunday alongside his army chief, Abhisit vowed to retake the sprawling protest site that has paralysed Bangkok’s main retail district, but gave no indication of when a crackdown might come.

Thailand is largely split between the mainly rural poor and urban working-class Reds, and the Yellows, who staged their own street protests that heralded a 2006 coup ousting their enemy Thaksin.

The anti-government movement remained as defiant after another night passed with no sign of a crackdown on their base, which has been fortified with barricades made from piles of truck tyres and sharpened bamboo poles.

“If Abhisit fails to crack down on us, he will have to leave office,” said one of the Reds’ leaders, Nattawut Saikuar.

If he succeeds in breaking up the protests, the Reds will rally across the country and prepare for a return to the capital, he said.

Many of the anti-government protesters have begun shedding their trademark red clothing and wearing other colours to make themselves harder to identify.

The red-clad movement has also blocked the path of hundreds of police officers headed for the capital to reinforce security forces.

When troops tried to sweep the Reds out of Bangkok’s historic area on April 10 they suffered a humiliating retreat in the face of bloody street fighting that left 25 dead and hundreds injured.

The military has warned protesters they will face live weapons fire in any new clashes.

Ramping up the pressure on Abhisit, the Election Commission earlier this month called for his ruling Democrat Party to be abolished over allegations of an illegal political donation in 2005 and misuse of a commission grant.

The first count will be forwarded to the Attorney General, who has 30 days to consider it. The election body has until the end of Monday to forward the second case of alleged grant misuse directly to the constitutional court. — AFP