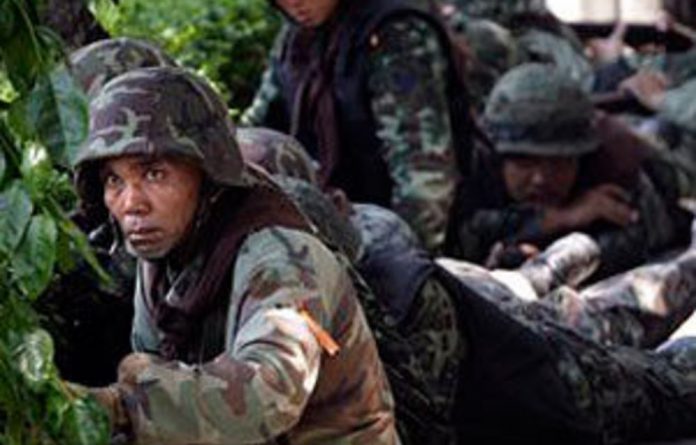 Thai troops battled anti-government protesters in central Bangkok on Friday, attempting to seal off their encampment after an assassination attempt on a renegade general unleashed a new wave of violence.

Two people were killed in the clashes and at least 18 were wounded, including three journalists, since the clashes erupted on Thursday night, according to hospitals and witnesses.

A Bangkok-based Canadian journalist working for France 24 television station was among the wounded, the station said. Two Thai journalists were also shot.

The army said it did not plan a crackdown on Friday on the main protest site where thousands of the red-shirted demonstrators, including women and children, have gathered, protected by medieval-like walls made from tyres and wooden staves soaked in kerosene and topped by razor wire.

“We will allow protesters to leave the area today [Friday]. And they will be able to leave safely,” army spokesperson Sansern Kaewkamnerd told reporters, adding that authorities were attempting to seal off the protesters and cut off their supplies.

Analysts said a possible split between a police force that shares the protesters’ loyalties to ousted premier Thaksin Shinawatra and the military will make it more difficult to contain the violence.

Underlining that, a Thai policeman fired bullets at soldiers while giving cover to protesters, a Reuters witness said. A police spokesperson denied the incident took place.

The crisis, in which 31 people have been killed and more than 1 400 wounded since April, has paralysed parts of Bangkok, scared off investors and has begun to hit the wider economy.

“They are tightening a noose on us but we will fight to the end, brothers and sisters,” a protest leader, Nattawut Saikua, told a cheering crowd of about 10 000 at the main protest site.

Sealing off protest site
Protesters had formed their own checkpoint overnight at the famous Suan Lum night market to stop soldiers from sealing off roads around their main fortified encampment in Bangkok’s commercial heart. That became one of the main battlegrounds.

They set fire to a bus, motorbike and tyres as they retreated, and soldiers took control of an intersection leading to a road lined with hotels, the US ambassador’s home and several embassies, which were closed and evacuated.

Troops fired rubber bullets into a nearby park after gunshots were heard, Thai television said.

Soldiers used tear gas and water cannon before dawn at the Nana intersection, packed with shops and racy go-go bars. Skirmishes flared in other parts of the city as the protesters remained defiant, vowing to fight to the death.

Abhisit is under enormous pressure to end the protests, which began with festive rallies on March 12 and descended into violence that is stoking concerns over the outlook of South-east Asia’s second-biggest economy.

The shooting and a security cordon marked the start of a violent crackdown in which the Thai government stands a good chance of clearing the streets, the Eurasia Group political risk consultancy said.

“But it will not end the polarisation that has led to the current instability — ensuring that the pressure from the Red Shirts will persist and that political volatility will remain a persistent problem for Thailand for the foreseeable future”.

Commander Red
It is unclear who shot a renegade general who has been in charge of security for thousands of protesters occupying a three square kilometre stretch of central Bangkok since April 3.

Khattiya Sawasdipol, a suspended army specialist better known as “Seh Daeng” (Commander Red), was shot in the head, apparently by a sniper, while talking to reporters on Thursday evening.

He underwent brain surgery and was in critical condition.

Khattiya had been branded a terrorist by the Thai government, which accused him of involvement in dozens of grenade attacks that have wounded more than 100 people.

But in recent days he was equally critical of other Red Shirt leaders, accusing them of embracing Abhisit’s proposed “national reconciliation”, which unravelled after protesters refused to leave the streets.

Speculation was rife as to who might have tried to assassinate him, with fingers pointing at the military, shadowy militants who have appeared in previous incidents of violence, and from the ranks of Red Shirts themselves.

His shooting sparked half-a-dozen confrontations overnight between rock-throwing protesters and armed security forces on the outskirts of the protesters’ barricaded encampment.

One protester was shot in the eye and died after a group of Red Shirts confronted soldiers armed with assault rifles next to a park in the Silom business district, witnesses said. Some protesters hurled rocks and troops fired in return.

Most businesses and embassies in the area have evacuated staff and were closed for the day. Apartment complexes were mostly empty after the government warned it would shut down power and water supplies, and landlords urged tenants to leave. — Reuters