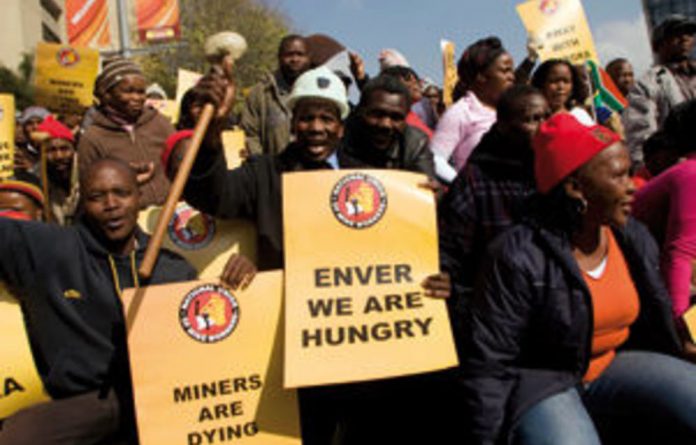 The East Rand was an hour away from an environmental disaster this week, when acid mine water started to flood the Grootvlei mine owned by the embattled empowerment company, Aurora Empowerment Systems.

Workers angered by months of working without pay had downed tools, bringing the 10 pump stations at the mine to a standstill for the first time in 75 years.

The toxic water would have led to the contamination of the East Rand’s groundwater resources within three years and potentially caused sinkholes near Nigel and Springs.

Underground water must be pumped out continually for mining to continue. When it flows over the mined rocks, it becomes toxic.

General maintenance has not been conducted at the mine since March, when most Grootvlei workers went on strike over non-payment of wages and the mine’s insurance for their workers had also lapsed.

On Monday 100 remaining workers Grootvlei mine’s care and maintenance unit went on strike. The unit is responsible for pumping acid water out of Shaft 3 to prevent the flooding of the East Basin on the East Rand.

On Wednesday water began flooding the underground pump station room. With an hour to go until the station became inaccessible to workers, management pleaded with workers to return to work, offering them 25% of their May wages.

‘We decided to go back again, because it was the ethical thing to do,” said one employee. A small band of workers ventured down Shaft 3 again to restart pumping.

‘The mine is incredibly unsafe and basically a time bomb,” said Gideon du Plessis, Solidarity deputy general secretary. ‘The workers are on a suicide mission. They are true heroes for risking their lives.”

Michael Hulley, Aurora non-executive director, has promised in a letter that the worker’s full May salaries will be paid by June 21 and that third party insurance will be reinstated on June 16. Du Plessis said the workers would quit on June 21 if the latest promises were broken.

Aurora has a management agreement with the liquidators to operate its East Rand and Orkney assets, after its bid to buy the liquidated Pamodzi mines was accepted. But the cashstrapped company had been running into trouble amid allegations of asset stripping, mismanagement and questionable financial transfers.

Aurora’s first investor withdrew, while a second investor will release funds only once it lists on the JSE. It is expected to do so only in August. This week a Chinese consortium put in a new bid of $51-million for the Pamodzi assets, but sources close to the deal are worried that there may soon be no mine to operate.

Environmental reports on the East Rand’s East Basin have warned of acid water bubbling into the street of Nigel and Springs within three years and destroying the East Rand’s groundwater resources.

The Vaal River barrage could also be at risk. The Grootvlei pumps are the last operating in mostly abandoned mines on the East Rand and carry responsibility for all the East Basin’s acid mine water.

Marius Keet, deputy director of water quality management at the department of water affairs, said his department was extremely concerned about the situation at Grootvlei and would have to intervene if pumping ceased again.

‘Although it’s the mine’s responsibility to ensure that the pumps are all operational, the department will not allow the mine to flood the pumps as this will result in the flooding of the basin and subsequently the decanting of acid mine drainage,” he said.

‘Apart from the negative impact on the environment, sinkhole formation is not excluded.” He said Aurora would be held accountable for any future environmental disaster if pumping stopped. It already faces criminal charges for pumping acid water into the Blesbokspruit.

But Enver Motala, the Pamodzi liquidator, played down the pump station fiasco. ‘We had heard about the threats that the pump stations would be switched off, but Aurora assured us that pumping was continuing,” he said.

‘As far as we’re concerned, the situation is under control.” Thulani Ngubane, Aurora director and spokesperson, did not respond to questions.