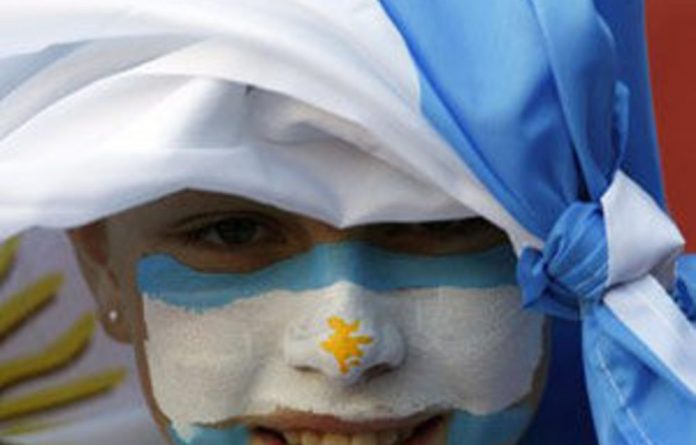 Two of football’s biggest stars, Diego Maradona and Lionel Messi assisted Argentina to hold on to a 1-0 win against Nigeria at Ellis Park Stadium on Saturday.

Maradona, ever the controversial figure of world football, watched his boys warm-up dressed in a tracksuit but to the crowd’s delight emerged for the kick-off in an immaculate suit. It was Messi however who put on a real show for the football lovers who packed the stadium.

The diminutive striker cut through the Super Eagles’ defence with ease, demonstrating ball control that only he can manage. Nigeria have goalkeeper Vincent Enyeama to thank for a superb first-half performance, and for the respectable scoreline. He denied Messi what looked like sure goals twice in the first five minutes as Argentina overwhelmed the Africans with an exciting brand of attacking football.

However there was nothing Enyeama could do to keep the marauding South Americans at bay in the sixth minute. Juan Veron delivered the perfect corner that was headed in by Gabriel Heinze with the Super Eagles defence guilty of ball watching.

From there on the star power around Messi — complemented by Carlos Tevez, captain Javier Mascherano and Gonzalo Higuain — was just too much for the Nigerians.

It did not help that new coach Lars Lagerback had left Obafemi Martins and the highly regarded Peter Odemwengie out of the starting line-up. Man of the match Enyeama still stood resolute despite his manager’s poor judgement. Messi threatened to take the game away from the West Africans with another goal attempt that again brought the best out of the impressive goalkeeper. The Barcelona star and the crowd thought he had finally scored with a lovely curling shot, but Enyeama acrobatically turned the ball away for a corner, six minutes before half time.

Lagerback realised his folly and brought in Odemwingie and Martins early in the second half.

The move transformed the Super Eagles. They began to match their more illustrious opponents and at times were a shade better. Poor shooting let the African side down on the few occasions they could have scored. Odemwengie first found some space on the left flank but one too many touches resulted in the ball rolling out of play. Next, it was Taye Taiwo to send an opportunity begging. The left back unleashed his trademark thunderbolt, but sadly for the colourful Nigerian fans, it went narrowly wide.

The Super Eagles had brought their famous orchestra to lead the cheerleading, but Ellis Park belonged to the Argentinians. The stadium was a sea of blue and white. Drapes resembling the kind found when Boca Juniors plays were seen around the stadium. How they managed to decorate the stadium so quickly before the kick-off is a mystery. There was even a drape of Che Guevara behind one of the goal posts.

If this is an African World Cup, Ellis Park was a Little Argentina. At the end, Argentina kept their proud record against the Super Eagles. Argentina won 2-1 in the 1994 World Cup, settled for a goalless draw in the 1995 Confederations Cup and won 1-0 at the Korea/Japan World Cup finals in 2002.

Nigeria went into the game with hope they could win the match and emulate Cameroon, who stand as the only African side to have defeated Argentina in a World Cup curtain raiser in 1990.