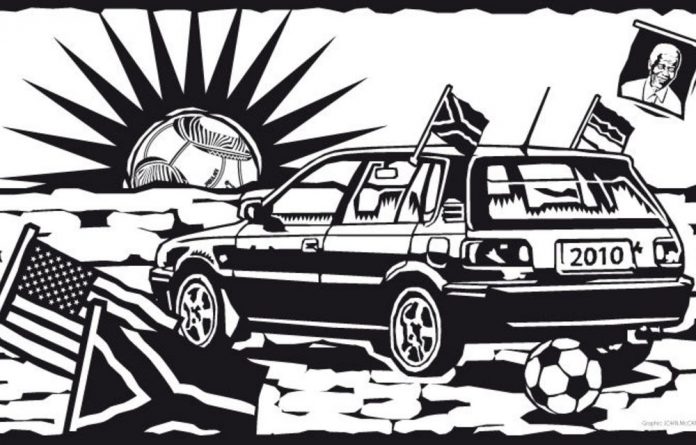 For a few brief hours, on a trip home to Jo’burg recently, I flew the flag. I wanted to see what it would feel like to assert publicly my national identity, rather than simply to feel it, or be it, but it didn’t work. After a few self-conscious missions across the northern suburbs, I demobbed: much as the general flutter filled me with joy, mounting a flag myself made me feel too, well, American.

Mandla, the security man who looks after us on our street in Melville, is trying to feel German. One of the many soutpiele to emerge during the World Cup, he is flying both South African and German colours off his Tazz. He knows that Bafana Bafana are going to be knocked out early and he wants to have someone to support after this happens. When I asked him why he did not wait until the home team were out before turning coat, he explained: “I can’t support a team unless I feel it in my heart and, if I want to feel it in my heart, I have to support them from the beginning.”

What is it about the relationship between flying a flag and feeling it in your heart? My colleague Pippa Green says that when she looks at all the South African flags on cars driven by whites in Pretoria, she realises that “for the first time since 1994, flying the flag is not a political statement. It’s just a statement of belonging. People are flying flags just because they’re happy and possibly even proud.”

Of course, there is as little chance of economic benefit to South Africa from the World Cup as there is of Bafana Bafana winning the tournament. Perhaps, then, that’s how we have to understand the state’s exorbitant expenditure on the games: as an investment in national identity. To make sense of this, it is instructive to look back at the 1995 Rugby World Cup.

No one who lived through those earlier times actually believes that Nelson Mandela prevented civil war in South Africa by supporting the Bokke and enabling them to win; rather, he created a pageant which enabled South Africans to celebrate, publicly, an already-existing fact; the war was over and we had survived.

Similarly, this year’s World Cup will not change anything material for most of us. Still, in the way that grand national pageants can, it might change the way South Africans see themselves and describe themselves. Much like Rugby 1995, Football 2010 could become a nostalgic buttress to hold things together when things get tough. It will become the moment we tell our children about; the moment we affirmed publicly that, just one generation after the fall of apartheid, a national identity existed in this deeply divided land and that exuberance and openness were core parts of this identity.

One of the loveliest effects of the current flutter is, in fact, the soutpiel factor; that it’s cool if you want to be South African and English, or South African and Ghanaian. Perhaps this is evidence of a surge of national confidence, a counter to the defensive nationalism that flag-waving is so often about.

Still, I worry about the relationship of World Cup success to national pride: How will we feel if we lose? Not at Soccer City, but on the pitch of global opinion and thus of self-regard. South Africa has an unhealthy obsession with reputation, manifested by a tendency towards bling: if we look good, we are good. A decade ago this led the government down the poisoned well of the arms deal; now, it has led us into a herd of exquisite white elephants, each one more beautiful than the last, which threaten to sap the fiscus in the years to come.

We remain victims of Mandela-exceptionalism: we were once the Rainbow Nation, the “World’s Greatest Fairy Tale”, and we need to be so again. Particularly in the face of so much negative press — the crime, the corruption, the Aids-crankery, a stampede in Thembisa — we need the world to love us again, sometimes it seems, before we can love ourselves. And so if we are found lacking in some way or other (the crime, the corruption, a stampede in Thembisa —) we run the risk of resorting to precisely the kind of hurt, angry defensiveness that is all too often the trigger for flag-waving and an easy route to xenophobia. Blame the Nigerians.

There is always a tension between the way national identity is manufactured by the state and the way it is felt and lived — customised — by the people. If, indeed, the World Cup was the state’s massive investment in the making of national identity, then it was also an investment, by the ruling party, in its own wellbeing and thus longevity. There is terrible poignancy in the fact that the state could never earn as much good feeling per rand spent, say, on housing, as it will out of the money spent on the World Cup stadiums.

Franz Fanon wrote brilliantly about this impulse in independent Africa, warning that one of the “pitfalls of national consciousness” is that, “instead of being the all-embracing crystallisation of the innermost hopes of the whole people, instead of being the immediate and most obvious result of the mobilisation of the people, it will be — only an empty shell, a crude and fragile travesty of what might have been.”

Fanon saw the neocolonial phenomenon of the national stadium as one of the primary examples of this and, visiting Soccer City a few weeks before the World Cup was to open, I could not help but hear his words reverberate around the magnificent place, even as I was awestruck — and even “proud” of it — myself.
What is so striking about Soccer City is that — unlike Ellis Park or the FNB Stadium which it replaces — you are entirely enclosed within the perfectly cambered calabash once you are inside; there are no vistas of the city or the world outside. This may well be a function of international design trends — the bird’s nest factor — rather than ideology, but the effect is intense all the same; at a time when it seems increasingly difficult to hold the Rainbow Nation together, the “African calabash” seems to provide South Africans with the fantasy of containment within a single shared national identity.

How different this is to Ellis Park, Jo’burg’s other World Cup stadium, Louis Luyt’s brutalist monument to the city’s mining-town entrepreneurial spirit, looming over inner-city decay. At Soccer City you enter an African dreamscape; at Ellis Park, you cannot but notice the grubby working city all around you.

And so the distance between the two stadiums is not just the 20km of Rea Vaya lanes that run between them. It is also the distance between a real, messy South Africa and the “Mandela Miracle” fantasy that at times enables, and at time oppresses, the country. At best we will shuttle between the two, waving our own little flags, feeling it in our hearts in our little ways, making up our South-Africanness as we go along and using our wits (and our vote) to bridge the gap. At worst, we might grow despondent and submit to the inexorable line of official flagpoles that march down the highways, looking up in awe at flags too big for a human hand to hold. It is up to us to ensure that the stadiums the state has built, with our money and allegedly for us, do not become the empty shells of Fanon’s prophecy. The joyful work of doing this begins today.