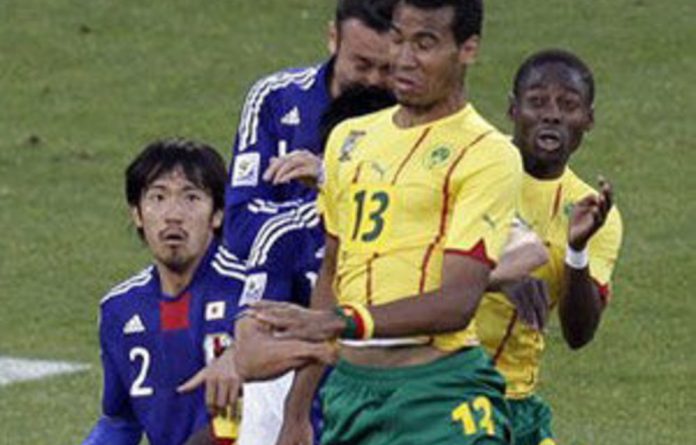 Eleven games into the tournament and Ghana remains the only African team to have won a match after Cameroon slumped to a 1-0 loss to Japan at Free State Stadium on Monday evening.

Hopes were high the Indomitable Lions would follow the Black Stars in brightening the prospects of the continent as it hosts its first World Cup finals.

While Ghana put up a great fight on their way to a 1-0 victory over Serbia on Sunday, the same can hardly been said of Samuel Eto’o and his charges.

Cameroon were absent for 90 minutes of the match and only came alive in the last four minutes, which referee Olegario Benguerenca added after regulation time. Japan were deserved winners, courtesy of a first-half strike from Keisuke Honda against a nervous African side.

The hard working Honda rose above Stephane Mbia to meet a delightful cross from Daisuke Matsui in the 39th minute and the goal was enough to take the full points for the second Group E match of the day.

Cameroon coach Paul le Guen was evidently upset after the match — but more importantly, was honest about the performance of his team.

“I am disappointed with the way the team played because their attitude towards the match was wrong. We were very tense in the first half and failed to show what we can do,” said Le Guen.

It was a bitter pill to swallow for the Cameroon fans and their government, who provided lucrative incentives for the team, including a private jet.

However Le Guen must carry some of the blame for the lethargic performance of one the most experienced African teams in this tournament.

“Eto’o playing behind the strikers was my decision and I take full responsibility for that,” he said.

The Inter Milan star is more effective playing upfront and it was Jose Mourinho who converted him to the unfamiliar supporting role.

With players such as Diego Milito at his disposal, Mourinho could afford the luxury of dropping the seasoned striker a notch back, but not Le Guen.

Le Guen’s pool of players simply cannot be compared to those of the Champions League title holders.

With Denmark and red hot The Netherlands the next opponents, Cameroon have made their job of advancing to the next round all the more difficult.

“I really regret that we did not play well and a win against Denmark is now a must,” said Le Guen.

The Frenchman’s loss gave under fire Japan coach Takeshi Okada some breathing room after enduring weeks of criticism back home for a team, that was until yesterday, viewed as hopeless.

Man of the match and goal scorer Honda summed up the mood in the Blue Samurai dressing room.

“Recently our team has not been playing well and our coach has been at the centre of most of the anger,” said Honda.

Okada even offered to resign on the aftermath of 2-0 defeat to South Korea in a friendly match last month. The terrible build-up must have brought back a flood of bad memories in his last tenure as head coach of Japan at the World Cup. It was almost 10 years ago that the 53-year-old lost all his matches at the 1998 finals in France. “I admit that we did not do well during the pre-tournament games but I always felt that my players had improved as individuals and it showed today,” said Okada.

He is now looking ahead of his next match with optimism. “My immediate thoughts after the final whistle were not to celebrate but on Netherlands,” he said.

Okada may be loved again in Tokyo, but not in Bloemfontein where he broke the majority of the hearts of the 30 620 fans at Free State stadium. They clearly wanted Cameroon to win.

Still, the 48 000 seater venue had some glaring spaces in the stands. With Fifa keen to investigate the high number of empty seats in the few matches that have been played, the home of Bloemfontein Celtics will certainly be added to the probe.

“Empty seats do not concern me, I know that the match is far away from home and I am happy with the fans that managed to make the long trip,” said Okada.