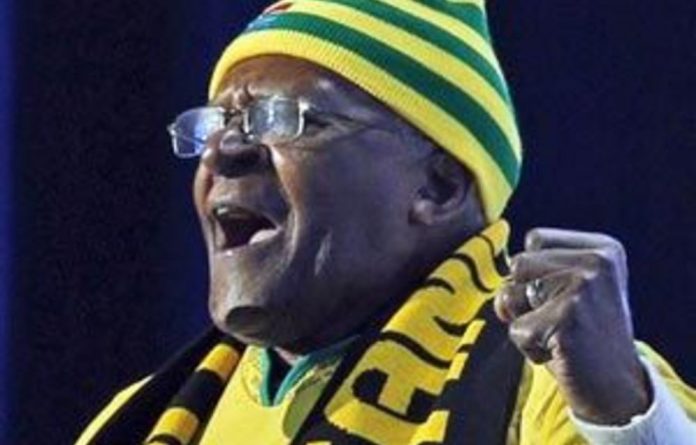 South Africa deserved to pat itself on the back for the way it was hosting the Soccer World Cup, and should find ways of sustaining the good will it had generated, Archbishop Emeritus Desmond Tutu said on Monday.

“Over the past few weeks, South Africa has experienced an extraordinary revival of its national spirit,” Tutu said in a statement.

“We were not only ready to host the World Cup, as far as infrastructure was concerned, but also in terms of our self-belief and self-esteem as a nation.

“We are hosting the greatest World Cup in history, and we are doing it in style.”

He said that although Bafana Bafana would have to play the “game of their lives” when they met France in Bloemfontein on Tuesday, if they left the tournament, they may soon be joined by top-ranked nations England, France, Italy and Germany, and higher-ranked African teams.

“I’m predicting a three- or four-nil victory. Let’s get behind Bafana tomorrow [Tuesday]. Win or lose, in many respects we have already won the World Cup.”

The country had developed a “fantastic infrastructure” for the games, and even though this was cold comfort for the hungry and homeless, Tutu said “man doth not live by bread alone”, a quote from Deuteronomy in the Bible.

‘We have done incredibly well’
Since the Blue Bulls’ rugby game there, Soweto had been abuzz with national and international visitors, and there was a unique spirit on the streets.

“We are deserving of more than a pat on the back. We have done incredibly well.

“According to media reports, more than 400 000 visitors have already arrived, with a second wave to come.

“The international media is awash with positivism about us. They really do see us as the beautiful butterfly that we have become.”

Tutu felt it important to stimulate national dialogue on how to sustain the extraordinary spirit and goodwill generated and make the World Cup “not an end, but a new beginning”.

In an apparent attempt to provide some comfort to Bafana Bafana supporters — and perhaps trying to prevent South Africans from losing interest in the Soccer World Cup — the ANC released a “proudly South African” media statement.

“The ANC calls on all South Africans to continue rallying in support of Bafana Bafana, confident that, despite last Wednesday’s loss against Uruguay, the national team will emerge victorious in the crucial game against France in the Free State … Let us not lose sight of the fact that we have already emerged triumphant by successfully hosting the world’s most prestigious soccer tournament,” ANC spokesperson Jackson Mthembu said in a statement.

He said South Africans, as hosts of the tournament, “have been able to do the impossible by demonstrating to the world that we are, indeed, wonderful hosts and will continue being the best hosts during the Soccer World Cup and beyond”.

Bafana Bafana need to beat France on Tuesday to have any hope of moving to the next round — and then their fate still depends on the outcome of other games in its group. — Sapa