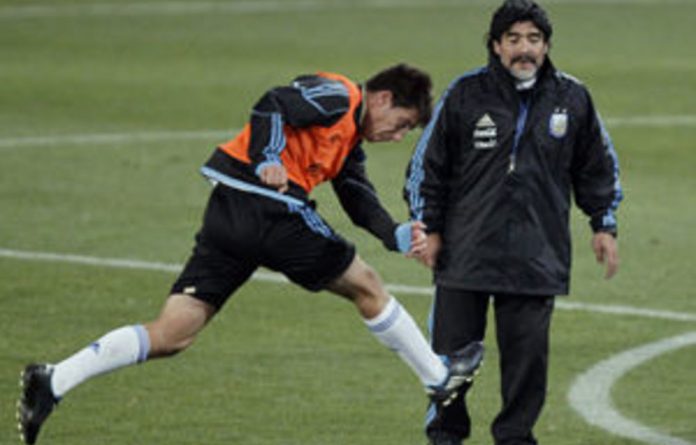 Diego Maradona plans on making seven substitutions to his starting lineup for Argentina’s match with Greece, but star Lionel Messi will play on Tuesday because benching him would be sinful.

Maradona, whose squad is all-but assured a berth in the round of 16, will give his reserves a chance to see some action, but Barcelona striker Messi will be on the field and might even be the captain for La Albiceleste.

“We wanted to give Lionel a break but he will play,” Maradona said. “He’s the best player in the world. I think it would be a sin not to give him to the team, to the people, and leave out a player who could decide the match.”

Messi, who spectacularly set-up three Argentina goals in a victory over South Korea, could wear the Argentine captain’s armband with regular captain Javier Mascherano of Liverpool set to sit out after an earlier yellow card.

Asked if Messi might assume the captain’s armband the way Maradona himself did in an earlier World Cup, the legend said only, “You will know that when the people go on the pitch.”

“I would really love that Leo does what is supposed to be done during the World Cup,” Maradona said. “I remember when I scored that first goal we had the match in our hands. Perhaps Messi can have the same experience.”

Messi has not been solved by rival goalkeepers, Maradona contends, noting his set-up ability on Real Madrid striker Gonzalo Higuain’s three goals against the Koreans.

“The choreography allows you to see Messi in a way you never expected to see him,” Maradona said. “I’m extremely impressed with Messi’s performance. He keeps opponents moving. He hasn’t scored yet but …

“In the matches I played, I was there when they needed me. I didn’t always score the goals and this is what Lionel is good for. He is distributing the ball.”

Maradona is confident in what amounts to a second team, saying some of them could earn their way into the first squad if they play well against Greece.

“These people are ready to risk their lives on every ball,” Maradona said. “If they perform well they could be on the first team in the round of 16. They all have a chance. They will fight for a position. That’s the motivation.”

Maradona, who turns 50 in October, remains unhappy over an unwhistled kicking foul in the Korea match, saying, “When the Korean kicks and gets no card, you have your doubts this is football and not kung fu fighting.” — AFP