A climate of threats 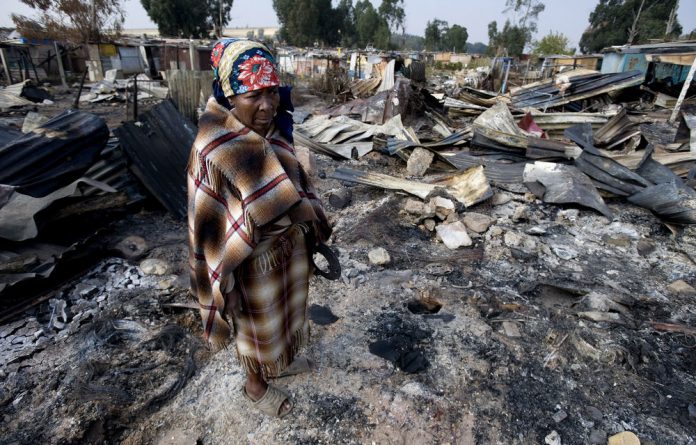 After receiving a number of threats, Zimbabwean Kisswell Dhliwayo is temporarily closing his tuckshop in the township of Tembisa, Gauteng from July 11, when the World Cup comes to an end.

“I’ve been told by so many of my customers that all foreigners must go after the World Cup. I’ve also been warned by my neighbours that people have said they will loot my shop, so I’m going to move out my stock,” he told the Mail & Guardian. “I’m going to close up, maybe for a week, and see what happens.”

Dhliwayo is concerned about how he will pay the mortgage on the house he has purchased in ­Zimbabwe when he closes.

“I’m worried my house will be repossessed if I have to shut up shop for a while. Other shopkeepers have been told the same thing, but we will have to wait and see what happens,” he said. “I escaped the violence in 2008, but I’ve heard people have been gathering in Tembisa to talk about their plans. I’m praying nothing will come of it all.”

Fearful for his safety, Dhliwayo sent a text message to a South African human rights organisation, which in recent weeks has received more than 50 text messages from foreigners located in different parts of the country, complaining of intimidation and threats from locals. The information has been passed on to the police.

Human rights organisations, as well as those working with refugees and migrants, are concerned about what has been described as a “climate of threats” that points to the possibility of outbursts of xenophobia and violence.

Miranda Madikane, the director of the Scalabrini Centre in Cape Town, which works with refugees and migrants, admitted she was feeling “overwhelmed” by the deluge of threats against foreigners.

Some organisations say the government is not doing enough to try to prevent the xenophobic violence of 2008 from recurring in South Africa. Sixty-two people died in the wave of attacks two years ago, yet questions have been raised about what the reconvened interministerial committee dealing with xenophobia is doing to counteract the wave of threats. Government spokesperson Themba Maseko was not available for comment.

The Scalabrini Centre recently conducted a survey and found that 68% of refugees surveyed reported receiving threats. More than 40 NGOs met this month, when further evidence was provided of increasing threats, intimidation and violence that refugees and ­foreigners are being subjected to in South Africa.

Madikane said the threats of xenophobia were being made across Cape Town, in both the suburbs and the townships.

“We should stand up and speak out about xenophobia and prevent it happening,” said Madikane. “We are feeling swamped by the threats of xenophobia and want to do something. But the threats are now becoming overwhelming, because we don’t know what to do to help people. As an organisation, we can’t move all the families in Cape Town.”

A 38-year-old South African living in Philippi, who asked not to be named for fear of intimidation, told the M&G she had often heard people talking on the bus about how the foreigners must leave after the World Cup. “I’m worried they will chase them away again like they did in 2008,” she said. “I have someone from Zimbabwe staying in a room in my backyard and we don’t want something like that to happen again.”

A meeting of stakeholders working with the Western Cape provincial government was called this week to try to prevent — and mitigate — “potential xenophobic attacks in the province” at several identified tension spots, the M&G was informed.

The deputy minister of police, Fikile Mbalula, has been given the job of monitoring xenophobia.

“The issue of xenophobic attacks after the World Cup has no foundation, except to influence the vulnerable within our society to commit crime,” his office wrote in a statement to the M&G. “We have confidence in both the police and our people.”

The police had placed “highly skilled sources” within various hotspots in the country to help identify problematic individuals, they said.

“We are also engaging various local businesses, churches and other strategic stakeholders to assist in the fight against any threat to peace, including xenophobic attacks. Above all, the police are ready to arrest anyone with criminal intent. We are in charge, not the criminals. This is not a banana republic and we will not allow citizens to become a law unto themselves.”

But the reassurances from Mbalula’s office have not convinced everyone that enough is being done to prevent the xenophobic attacks from happening again.

Duncan Breen, advocacy officer for the Consortium for Refugees and Migrants in South Africa (Cormsa), is extremely worried about the “climate of threats”.

Among Cormsa’s recommendations is a need to strengthen the ability to detect and respond to threats or outbreaks of xenophobic violence.

The consortium is pushing for a centralised national contact number where people can report threats or outbreaks of xenophobic violence, as the general 10111 number has “proved insufficient”.

Another of its recommendations is to strengthen access to justice for victims of xenophobic violence. “There is a need to improve the accountability of perpetrators of xenophobic violence by fast-tracking such cases through the courts. This reduces the opportunity for other community members to lobby for charges to be dropped and enables plans for reintegration or other solutions to proceed.”

In addition, stated Cormsa, many victims of xenophobic violence lose all property and means to support themselves during this process of displacement. The victim empowerment programme’s policy guidelines identify targets of “hate victimisation” as a priority group, and provide for compensation and restitution, yet Cormsa said these provisions were rarely applied to victims of xenophobic violence.

The underlying causes of xenophobia in South Africa are hotly debated. The forced-migration studies programme at the University of the Witwatersrand conducted community-level research and found that the xenophobic violence was not triggered by “a third force”, a human “tsunami” of new immigrants, poor economic conditions or organised crime.

The key trigger of violence against foreign nationals and ethnic minorities, according to the study, is competition for formal and informal local leadership positions and competition for business opportunities.

For Dhliwayo, this certainly has a ring of truth to it. The 35-year-old businessman is hunting for a room to store his stock when the World Cup ends. South Africans are threatening him simply because he owns a business in Tembisa, he said.

“But anybody could do what I am doing. I am not stealing from anybody,” said Dhliwayo. “I just work very hard. So why are people threatening to loot my shop?”