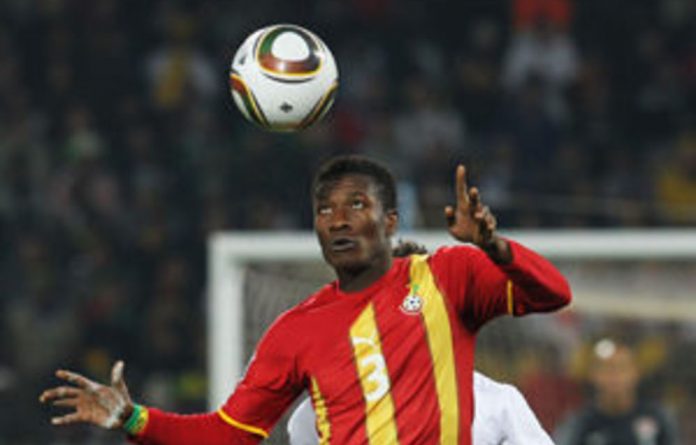 Ghana have injury and suspension headaches ahead of a World Cup quarterfinal against Uruguay at Soccer City on Friday.

Star striker Asamoah Gyan joined the casualty queue after taking a knock at training near the team’s Sun City base.

“My ankle is a bit swollen but I do not think it is too serious. I will be ready for Uruguay,” he assured reporters as he watched his teammates practice with ice wrapped around the ankle.

Gyan — from French club Rennes — played a key role as Ghana became only the third African country after Cameroon and Senegal to reach the last-eight stage of the competition.

He scored the late winner against Serbia from a penalty, equalised against Australia from another spot kick and unleashed an extra-time thunderbolt that floored United States in the second round last weekend.

The only other Ghana scorer at the tournament, midfielder Kevin-Prince Boateng, is among those battling to be fit as Ghana look forward to huge backing from South Africans against Uruguay.

Boateng worsened a hamstring problem he took into the USA clash and his situation is worrying coach Milovan Rajevac as he will lack suspended defender Jonathan Mensah and influential midfielder Andre Ayew.

“We are trying our best to get the injured players ready in time,” was the most optimistic line Rajevac could manage with defenders Samuel Inkoom and John Mensah also on the treatment table.

Mensah from English Premiership club Sunderland has struggled with a back problem for some time but is expected to start and could be partnered by Isaac Vorsah with Jonathan Mensah ruled out after two cautions.

Ayew, one of two sons of three-time African Footballer of the Year Abedi ‘Pele’ Ayew in the squad, has been an ever-present in South Africa before a second yellow card ruled him out.

Among those who could replace Ayew is ‘bad boy’ Sulley Muntari from European club champions Inter Milan, who has clashed regularly with arch disciplinarian Rajevac since he succeeded Frenchman Claude le Roy two years ago.

Dressingroom criticism of the coach after a group draw with Australia almost led to him being kicked out of the squad and officials have admitted he is on a final warning.

Muntari refused to play in a friendly against Angola last November, leading to his exclusion from the African Nations Cup two months later in which severely depleted Ghana finished runners-up behind Egypt. — AFP

Red, green and gold: A pan-African history of flags and the remarkable woman who inspired it

Domestic workers labour on over injury

Bafana crash out of Afcon as Ghana and Algeria advance