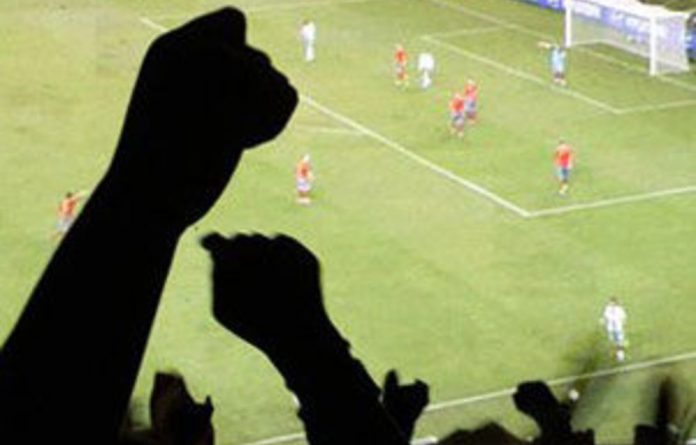 Spain and Paraguay squeezed into the World Cup quarterfinals on Tuesday while Fifa boss Sepp Blatter apologised for two colossal refereeing blunders that have created the tournament’s biggest controversy.

With the last 16 round over, the World Cup now takes a break until Friday when two of the world’s most talented sides, The Netherlands and Brazil, kick off the first quarterfinal.

After a back-heel from Xavi into the box, Villa saw his first effort blocked by goalkeeper Eduardo but managed to put the rebound into the net off the crossbar in the 63rd minute.

Though failing to score more, Spain looked classy and kept the world’s most expensive player, Cristiano Ronaldo, largely at bay apart from one swerving free kick.

“We’re working well, we want to create a bit of history,” said coach Vicente del Bosque, who hopes to bring the trophy back to Spain for the first time.

First penalty shoot-out
In Tuesday’s first game in Pretoria, Paraguay beat Japan 5-3 on penalties after a tedious goalless draw, reaching the quarterfinals for the first time in their history and ending Asian interest in the tournament.

In the first shoot-out of the tournament — an agonising way to end games, hated by players and coaches — Japan’s Yuichi Komano hit the crossbar with the third kick, while Paraguay’s players kept their cool to slot five home confidently.

“It’s never nice for a match to be decided in this way,” said Paraguay’s coach Gerardo Martino, who wept uncontrollably in his dugout after striker Oscar Cardozo netted the winner.

The quarterfinal matches now line up as follows: The Netherlands vs Brazil and Uruguay vs Ghana on Friday, then Argentina vs Germany and Paraguay vs Spain on Saturday.

World soccer body Fifa’s boss Blatter, who has for years opposed technology used to settle controversies in most other major sports, did an about-turn after two glaring referee errors on Sunday caused an outcry in soccer circles worldwide.

“It would be a nonsense not to re-open the file on goalline technology,” he said.

Blatter apologised to the English and Mexican football federations after blatantly wrong decisions — English midfielder Frank Lampard’s disallowed goal that crossed the line in the 4-1 loss to Germany, and Carlos Tevez’s clear offside for his goal in Argentina’s 3-1 defeat of Mexico.

Iran crows at foes’ flops
The referees responsible for those two decisions have been dropped for the remainder of the tournament.

Blatter also gave a stern warning to the French government not to interfere in soccer in the aftermath of Les Bleus’ shambolic exit after a player revolt.

“In France they have made an ‘affaire d’Etat’ with football,” he said, adding that France’s national and club teams could be banned from international competition if the government did not stay out of soccer affairs.

President Nicolas Sarkozy has called for a shake-up of soccer, a parliamentary commission is looking into the French debacle, and Sports Minister Roselyne Bachelot said the resignation of the French Football Federation president was “unavoidable” a couple of days before he quit.

Underlining how soccer is so much more than a game, Iran’s government crowed that the early exit of England, France and the United States was just punishment for their opposition to Tehran’s nuclear programme.

“Those countries which played a key role in imposing new sanctions against Iran — like England, America and France — were all eliminated in the preliminary phases,” Foreign Minister Manouchehr Mottaki said.

South Africa’s crime problem was a major concern before the World Cup but so far there have only been minor incidents.

The latest hit Fifa itself when burglars stole seven replicas of the World Cup trophy after breaking into the soccer body’s offices in Johannesburg. – Reuters