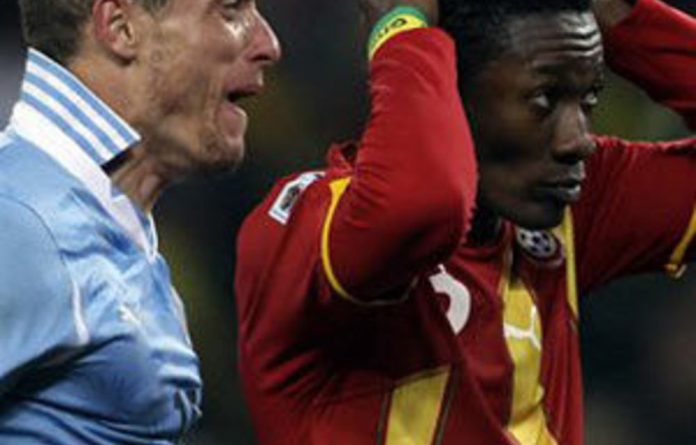 Ghana defender John Pantsil choked back tears as he bemoaned a decision to award a last-minute penalty instead of a goal which would have seen the Africans qualify for the semifinals of the World Cup on Friday.

Uruguayan striker Luis Suarez handled the ball on the line in the dying seconds of the quarterfinal, denying Ghana a goal while both teams were tied at 1-1.

The guardian.co.uk presents this video of the Sowetan send-off for the Ghana team on Sunday July 4 2010. Being the last African team to get kicked out of the World Cup, they garnered huge support from all over the African continent.

Striker Gyan Asamoah blasted the ball against the bar and over, sending the match to a penalty shoot-out which Uruguay won 4-2.

“In the last minute we got a goal but the referee disallowed it,” Pantsil told reporters, the emotion straining his voice.

“Instead of him giving the goal he whistled for a penalty. It was not a penalty, it was a goal because he [Suarez] was the last man in the goalline and he saved the ball with the hands.”

Cheering Asamoah
Pantsil said there would be no blame laid on striker Asamoah for the missed penalty.

“We have been talking to him about it. Obviously he is feeling very bad and it is not easy to forget it,” Pantsil said.

“As a teammate, we have to keep him with us, talk to him about it so that he can forget it as soon as possible.

“It is penalty, anyone can miss it. It is part of football. It is not a mistake, it is not a mistake at all. He kicked it from his heart. We all wanted to win the game but, yeah, we will pick it from there.”

Goalkeeper Richard Kingson said there would be no repeat of the backlash from fans in Ghana against Asamoah like that which occurred following a poor showing at the African Cup of Nations at home in 2008.

“No, there will be nothing like that,” Kingson said. “I had a message from my wife. She said everybody is happy now. We did our best and everybody is cheering him.”

Ghana’s Serbian coach Milovan Rajevac congratulated Uruguay but made clear his feelings on the last-second drama.

“It was sporting injustice,” he muttered at the end of his news conference.

“It was worth being sent off in this way for because at that moment there was no other choice,” Suarez told reporters. “I’m very calm.”

Uruguay coach Oscar Tabarez rejected assertions that his team had won by cheating.

“Yes, he stuck his hand out but is that cheating?” he asked. “I think it was instinctive. He was thrown out [of the game], he can’t play the next match. There are consequences.”

“When he handled, he didn’t know Ghana would miss the penalty. Is Suarez to blame for Ghana missing the penalty in the shoot-out?”

Forlan was named Man of the Match after an indefatigable performance up front, highlighted by his third goal of the tournament — a beautiful equaliser from a freekick 10 minutes into the second half.

He said Suarez had saved the day for the South Americans.

“We knew it was going to be difficult. The way it finished was incredible,” Forlan told a post-match news conference.

“It was a pity Suarez was sent off. Instead of scoring, he saved one, he saved the game.” – Reuters