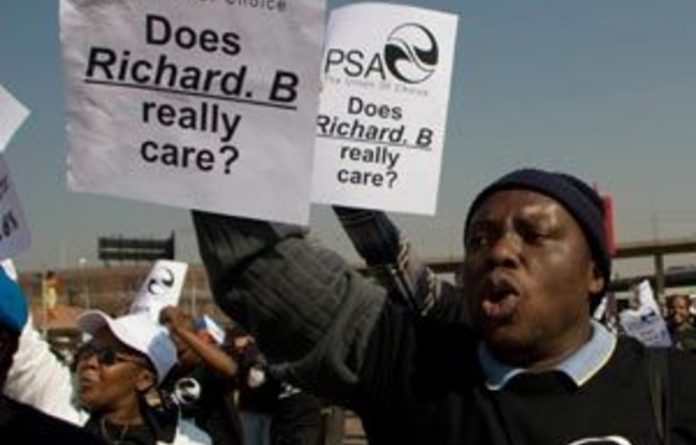 A senior Congress of South African Trade Unions (Cosatu) leader has expressed fear that the looming strike by its members in the public service will damage the federation’s good relations with President Jacob Zuma, while strengthening the hand of ANC leaders opposed to the left’s agenda.

In an interview on Thursday, Fikile Majola, the general secretary of Cosatu’s health affiliate, Nehawu, said he was concerned about the consequences of the strike action by six Cosatu unions, just a month before the ANC’s national general council (NGC).

The unions, which represent more than half the 1,3-million government employees, served a seven-day strike notice on the government on Wednesday.

On Thursday members of the 200 000-strong Public Servants’ Association (PSA) took to the streets to demand better pay, after labour rejected the government’s 6,5% wage offer. Workers are demanding an 8,6% wage increase, a R1 000 housing allowance and the equalisation of subsidies for medical aid.

The PSA strike largely involves immigration and passport officials, while the Cosatu strike could paralyse services across the state sector — reflecting badly on Zuma’s administration.

Cosatu, locked in an ideological battle with nationalists in the ANC, is worried that the strike will damage Zuma’s trust in the federation, based on the role it played in delivering him the ANC leadership at the 2007 Polokwane conference. Majola said that while the strike was likely to have negative consequences for Cosatu’s relations with the ANC and the government, union leaders confronted a difficult choice between satisfying alliance partners and union members.

“No union will be able to sell the [government’s] 6,5% wage offer to its members. Cosatu leaders are also under pressure from our members. Other unions organising in the state-owned enterprises were able to get about 10%,” he said.

Majola said Cosatu was due to meet Cabinet ministers late on Thursday and that the ministers would try to explain the rationale for the government’s offer. “Unfortunately, it’s a little too late for that now. We are going to have a major showdown soon.”

“We’re aware that this kind of action will have a negative impact on us. Some in the ANC will go to the NGC [in September] and blame us for this. Some demagogues will say, ‘We told you these people are not allies.’ That’s the danger.

“My biggest concern is when you take on the administration, what will this do to the Polokwane resolutions?” said Majola.

Ntola said he would be surprised if the strike damaged relations between Zuma and Cosatu.

“I’m of the view that our relations should be maintained through struggles,” said Ntola. “As we deal with salary issues, we also have to deal with other [economic] conditions. Every political activity should take into consideration matters raised before.

“The strike action will serve as a barometer to reflect if [Zuma’s government] is doing well. If the government is not responding positively to our demands, we will do to them what we did to others.”

PSA spokesperson Manie de Clercq said that although he was happy with the turnout on the first day of the strike, it was too early to determine its impact.

“The reports I got are that 3 000 workers in Johannesburg, 4 000 in Mmabatho and 2 000 in Durban stayed away from work. If this is the amount on the first day, we might see something different next week,” said De Clercq.