The bucks stop with Cele 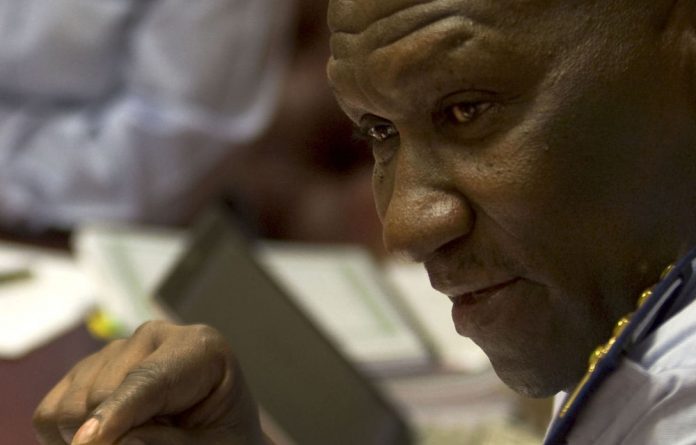 Police General Bheki Cele has vigorously defended his decision to personally sign off every police tender of more than R500 000 that is awarded.

In an interview with the Mail & Guardian on Thursday, a spirited Cele said he was committed to ridding the police of corruption and would even pay senior officials to leave if that would lead to a more efficient South African Police Service (SAPS).

Cele recently came under fire over his approval of multimillion-rand leases for new police headquarters in Pretoria.

This week the M&G obtained a letter signed by Cele on March 23, instructing all police bosses to seek approval from his office for any tender valued at more than R500 000.

Cele said he issued this instruction for the first time in November last year after a strategic planning session with his top management. Asked why he should personally be involved in the signing of tenders, Cele said he became aware that “a lot of contracts, big money, were signed while I was in office and nobody came to me”.

“I was given the responsibility as accounting officer to give answers. I’m bringing back that kind of culture; the whole chain must be fulfilled.”

Asked whether the signing of tenders would take up a lot of his time, Cele said Mondays were “days of signing — in between I do create time. It depends how lazy I am to do my work and I am not lazy to do my work.”

Cele’s approach has pitted him against one of his former deputies responsible for supply-chain management, Hamilton Hlela, and the former head of police buildings, Stephanus Terreblanche.

Both Hlela and Terreblanche were paid out last month at ages 55 and 58 respectively after Cele asked for their redeployment.

Last week in Parliament, Cele claimed they were instrumental in the mismanagement of procurement processes at the SAPS. They hit back, accusing Cele of lying and saying their removal from office was directly related to their resistance to renting new buildings in Pretoria and Durban.

Pushed to provide examples of dodgy contracts signed without his knowledge, Cele said the police’s lease with the owners of Wachthuis, the current police head office in Pretoria, was extended for 10 years a day before President Jacob Zuma appointed him police chief on July 29 last year.

Another example, according to Cele, was a contract for the provision of police clothing that was awarded without his knowledge to one company in KwaZulu-Natal until 2013.

Cele says his orders were clearly being ignored and he had to take more drastic measures.

“In November 2009 I went to the gym and ran into one of the owners of Wachthuis. He said: ‘I’m so glad to meet you; we’ll be coming to renovate your office and put in the gym.’ I was confused. Which renovations? I called [Hamilton] Hlela and asked who was coming to renovate. He said he forgot to tell me the lease [with Wachthuis’s owners] was extended.”

This is when Cele realised there was a “rat” in the police, and so he called special investigating unit (SIU) head Willie Hofmeyr.

“I told him there are things I don’t understand. There is this clothing contract, the building one. I suspected there were other things as well. Hofmeyr said he was already approached by the Independent Complaints Directorate and was putting together a committee.”

Last month Zuma signed a proclamation for the SIU to conduct a full investigation into the police’s procurement departments.

Asked about the police’s approval of huge leasing contracts for buildings owned by businessman Roux Shabangu, Cele said that Wachthuis was 40% overcrowded and the police needed new premises in Pretoria.

The Sunday Times reported last month that Shabangu had bought the Sanlam Centre in Pretoria shortly before it was leased by the department of public works on behalf of the police.

Cele says he didn’t even know what the Sanlam Centre was before the name was submitted to him by Hlela. He strongly denies suggesting to Hlela or his colleagues to do business with Shabangu or his companies.

Cele also denies being involved in the negotiations between public works and Shabangu for the leasing of the huge 45 000m2 Transnet building in Durban.

Shabangu admitted this week he was about to become the owner of the Transnet building after negotiating with Transnet for three years.

“I’ve done business the right way throughout my life. I don’t need a headache, because a headache doesn’t bring any cent into my pockets,” he said, adding that he is being singled out because he’s black. A number of white-owned companies that have more than 10 leasing agreements with the police are not being probed, he said.

Asked whether he has ever bribed anyone for a tender, Shabangu said he would never do that. “I’ll rather lose the deal, finish and klaar — If I do it, maybe you belong to some investigations unit, then I’m fucked. I’ve lost so many deals because I didn’t want to pay.”

Public Works Minister Geoff Doidge announced last month that both contracts with Shabangu would be put on ice until investigations by the public protector and the SIU had been finalised.