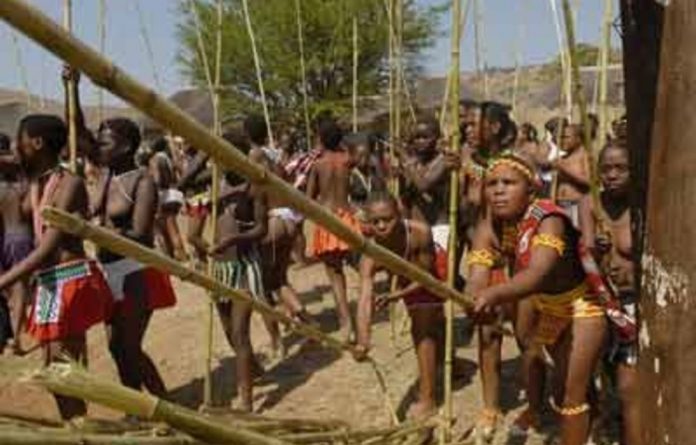 Fikile Khubone (23) was one of the 26 000 Zulu maidens (virgins) who turned out for uMkhosi WoMhlanga — the Reed Dance — on September 11.

It took her six hours by bus to get from her home in Edendale in KwaZulu-Natal to Nongoma for the annual celebration.

The festival — held at King Goodwill Zwelithini’s eNyokeni Zulu Royal Palace in Nongoma — was introduced by King Shaka to promote respect for women and virginity before marriage.

In addition, the Reed Dance is also a lively celebratory occasion which shows-off the cultural heritage of the Zulu kingdom.

Since the festival’s introduction, tens of thousands of young women have participated in the ceremony, dressed in short Zulu beaded skirts and necklaces over their bare breasts.

Khubone has been participating in the festival since she was 16 — by choice.

The festival gets its name from the reeds which grow in a nearby riverbed and which are carried in a procession by the young Zulu women — invited to the King’s palace after passing a virginity test.

In the months leading to September the young women undergo virginity tests, where older Zulu women examine the girl’s hymen to see whether it’s still intact.

If the women’s hymen is deemed to be intact, this is celebrated with ululating and songs of joy.

According to Zulu tradition, only virgins are permitted to take part in the Reed Dance to ensure that the ceremony is “pure”.

Virginity testing was originally used in the Zulu kingdom to determine dowries. Traditionally, more cows are presented to the bride’s family if the bride is still a virgin.

According to Khubone, it’s a great honour for young women to be invited to take part in the Reed Dance as it’s a source of distinction and pride for their families and communities.

Origins
As the Reed Dance ceremony begins, the young women prepare to form a procession led by the daughters of the Zulu king.

Each maiden carries a reed which has been cut at the riverbed. The reeds reflect a connection with the origin of the Zulu people.

When the Zulu’s moved southwards they travelled in rafts — “isilulu” — made from reeds. Thus the Zulu phrase “sehla ngesilulu”, which translates “we came by traditional boats”.

The young maidens bathe in the river at the crack of dawn, said to wash away bad luck, before carrying the reeds to the royal palace to place in a pile for the king.

According to Zulu tradition, if a woman who is not a virgin takes part in the ceremony, her reed will break. According to Khubone, this is punishable by whipping.

“These girls are whipped by the men commissioned by the king to make sure that the process goes smoothly,” she said.

Khubone has never seen this happen in the years she has participated.

However she said that to this day, silence still falls on the crowd as the maidens choose a reed.

After choosing the reeds, the procession makes its way up the hill to the palace entrance where the king awaits.

Before placing the reeds on the pile, the maidens are required to hold up their reeds while they sing and dance as part of the festivities.

As leader of the group of young women, the chief princess is the first to kneel down before the king to present him with her reed to mark the occasion. It was during the Reed Dance festival in 2002 that King Zwelithini chose his sixth and youngest wife Zola Mafu — 38 years his junior.

Although some criticise the festival, claiming it disempowers young women and forces them to be made wives at an early age, Khubone disagrees.

“I enjoyed the day because it’s our culture and I’m proud.”

HIV/Aids workshops
According to Khubone, some things have changed since she’s been attending the festival, such as the number of police officers deployed en route to the river and the amount of international attention the ceremony has gained over the years.

Khubone believes the continuation of virginity testing does not only ensure that Zulu culture is kept alive — but workshops on HIV/Aids — recently introduced during the testing, are a means of arming women with the knowledge necessary to protect themselves.

“This makes the girls better informed on how to protect themselves from HIV, STI’s, pregnancy and being used by men,” Khubone says.

KwaZulu-Natal is the worst HIV/Aids afflicted province, with the country’s highest prevalence rates.

According to the Journal of the International Aids Society, recent estimates indicate that 26,4% of KwaZulu-Natal’s working age population is HIV-positive, compared to 15,9% in the rest of the country.