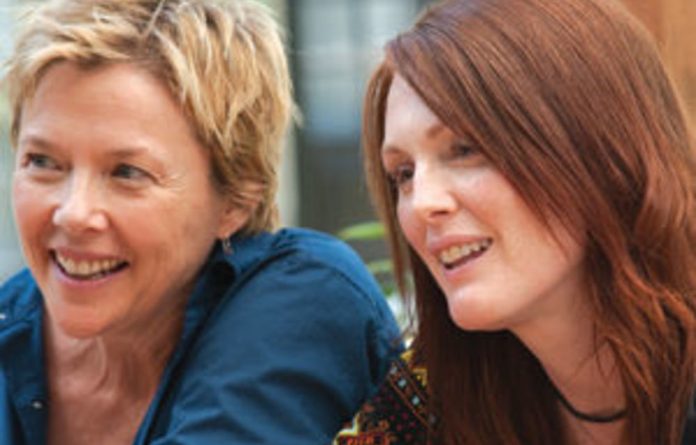 The Kids Are All Right has several things going for it.

Close behind Mark Ruffalo at his most adorably Ruffaloesque, Julianne Moore’s scrumptious rump and the title being The Kids Are All Right and not The Kids Are Alright, is the rare but pleasurable spectacle of a woman my age up on screen in big close-up.

We haven’t seen much of Annette Bening of late, and apparently she’s been too busy rearing children to worry about getting lifted or Botoxed, because she looks older. Well, hurrah for that! That’s what my neck looks like too.

There are, of course, inevitable online comments by wet-eared oiks who sneer: “She’s beginning to look like the Crypt Keeper.” But this is what fiftysomething females look like, tykes, so get over it.

The perennial whine is that men age better than women, but I don’t think that’s true — it’s all down to conditioning, and the fact that lived-in female faces are so absent from approved commercial images that we haven’t learned to appreciate them by adjusting our ­aesthetic expectations accordingly.

Cosmetic surgery has been queering the pitch as well; personally, I’d rather look like the Crypt Keeper than a mad clown in a wind tunnel with an allergy that has made my lips swell up like sausages.

Sixtysomething Helen Mirren currently seems to be cornering the market in surgically unaltered broads of a certain age and it’ll be hard not to get a kick out of seeing her firing a Browning M2HB in Red. It’s not that I want to see women wielding rocket-launchers all the time, but it’s more fun than seeing them as the wittering old biddies of Driving Miss Daisy or Ladies in Lavender.

Hollywood has always been ageist and it still shocks me to look at All about Eve and realise Margo Channing is a has-been at 40, that Sunset Boulevard‘s Norma Desmond is a crazy old bat at 50, and that Bette Davis and Joan Crawford were only in their 50s when they went full-on grotesque for Whatever Happened to Baby Jane?

Yet there are types of older women that Hollywood used to do rather well and who nowadays seem almost extinct. I’m talking about the wisecracking broads with attitude, as incarnated by the likes of Joan Blondell, Thelma Ritter, Kay Thompson or Eve Arden, only 36 when she played Cornelia “Stonewall” Jackson in Cover Girl, but who went on to play variations of that character for the rest of her career.

My generation’s first exposure to Agnes Moorehead wasn’t her work for Orson Welles, but when she was well into her 60s and perfecting the waspish put-down of her daughter’s attempts at domesticity on a weekly basis in TV’s Bewitched. Maybe, instead of the abominable big-screen Bewitched with Nicole Kidman, Nora Ephron should have given us Endora: The Movie. No, scratch that thought — Ephron shouldn’t be allowed anywhere near it.

I wish there were more leading ladies like Margaret Rutherford, who did her best screen work after the age of 50, including four outings as Miss Marple.

“I may be what is termed a spinster, but I do know the difference between horseplay and murder!” she declares in between bouts of undercover snooping and — at the age of 71 in Murder at the Gallop — doing the twist.

But I’m not fussy; I’ll take harpies as well. I’ll wager I’m not the only one who thinks it a crying shame Rosa Klebb (as played by Lotte Lenya, 65) bought a bullet at the end of From Russia with Love instead of popping up with Blofeld-like regularity to liven up some of the lesser Bond films with her butch haircut and ­sensible but deadly shoes.

Just in case there are any questing producers reading this, may I put in a plea for one of them to make a film of ETA Hoffman’s Mademoiselle de Scudery, in which a spry and still glamorous 73-year-old lady novelist and poet at the court of Louis XIV single-handedly solves a case of multiple murder and saves an innocent man from the guillotine. Judi Dench (75)? Eileen Atkins (76)? Susannah York (71)? You can bet they’d all be up for it. —