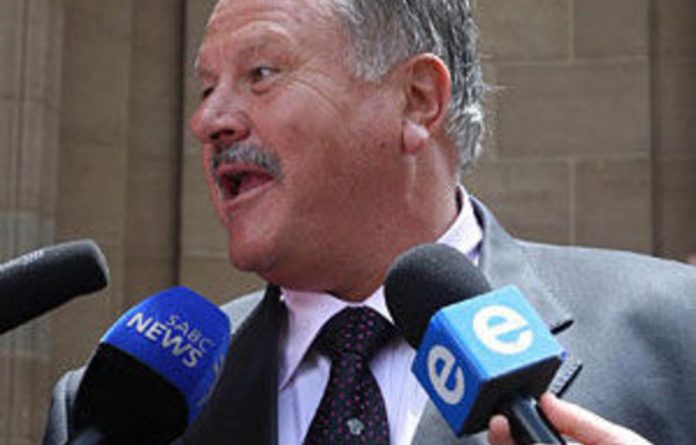 A prima facie case exists against Brett Kebble murder-accused Glenn Agliotti, and his application for a discharge should therefore be dismissed, the Johannesburg High Court will hear on Thursday.

‘This clearly shows that Nassif was truthful when he said the accused was involved and had to arrange the funds for the killing of Brett,” the state’s arguments read. ‘This further proves the chain of command between Brett, the accused, Stratton and Nassif.”

The state further argues that without Agliotti’s promising to arrange the funds, the killing would not have taken place. ‘There is therefore no basis upon which the accused should not be found guilty of the resultant consequences.”

The prosecution also argues it was ‘improbable” that Agliotti would call Schultz and tell him to ‘call off the boys” if he was not aware of what this was about.

‘It is not a coincidence that the accused and Nassif had a meeting earlier on the day of the ‘call-off-the-boys’ call, discussing the issue of the money for the payment of the shooting. It is submitted that it is very clear that indeed they discussed — payment for Brett’s shooting, amongst others.

‘It is submitted that even though the accused himself did not pay the killers, i.e Schultz and others, he had undertaken to pay for Brett’s killing.”

No motive
On the shooting of Allan Gray auditor Stephen Mildenhall, the state argues Nassif alone would not have a motive to remove him from ‘the system”.

‘However, the accused, being a close associate of both the deceased [Kebble] and [Kebble’s business partner John] Stratton and him having benefited from the JCI empire through the Spring Lights account, clearly had such a motive.”

Nassif’s former business partner Steven Saunders testified that Agliotti was the ‘middleman” between Stratton and Nassif, and that they would meet ‘at least” once a month.

The state also shrugged off criticism by Agliotti’s lawyers that there were discrepancies between the written statements and oral testimonies of witnesses.

‘In this regard it is respectfully submitted that the witnesses could not have been expected to have written in detail what they were going to testify about in open court,” the heads read.

The contradictions between statements and actual evidence are ‘not material”.

‘In fact, it is submitted, such contradictions point to the fact that the witnesses were not fabricating any evidence against the accused.”

The defence, led by Advocate Laurance Hodes SC, is set to wrap up its argument in applying for a Section 174 discharge for Agliotti. The state, led by Advocate Dan Dakana, will then tell the court why Agliotti had a case to answer.

Section 174 of the Criminal Procedure Act provides that if at the close of the prosecution’s case, the court believes there is no evidence that the accused committed the offence, it may return a verdict of not guilty.

The matter resumes at 10am. — Sapa