The future of beauty 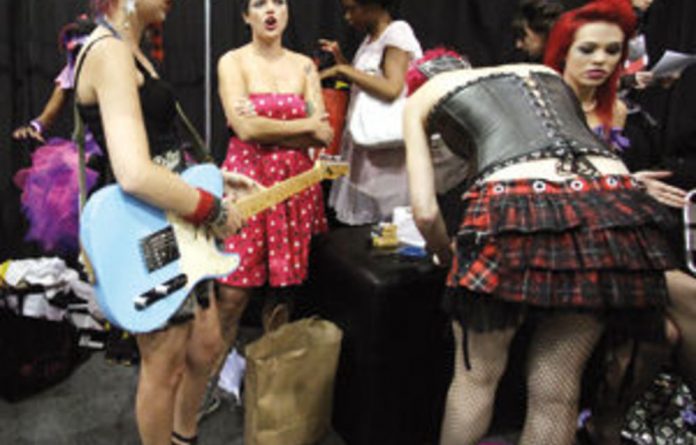 Even at a glance it is evident that this is no ordinary beauty pageant.

Tattoo-covered flesh and piercings take to the floor, as do an abundance of fishnets, heels, red lips and smokey eyes.

System of a Down’s Toxicity begins to blare from the speakers. It’s time for the show to start.

First up is punk-rock chick Pinky — no doubt named after her shocking cerise hair — who walks the ramp in a tiny tartan skirt.

Next is Squishy, a gothic goddess dressed in a satin corset, pencil skirt and red heels. A miniature top hat is perched atop her dark locks and she swings a cane coquettishly as she struts for the judges.

Even so, the judges had an ample selection of beautiful, slim twentysomethings to choose from. But that is of little ­surprise.

Psychologist Nancy Etcoff, in her book Survival of the Prettiest: The Science of Beauty argues that being good-looking ensures the survival of our genes. Gentlemen may prefer blondes, she says, not for their hair colour but for the fairness of their skin, which makes it easier to identify the flush of sexual excitement. And high heels accentuate a woman’s boobs and butt, which indicate fertility.

But then humans have always altered their appearance to achieve an “ideal” look. In ancient Egypt red pigments were used as lipstick and kohl was also used to blacken eyebrows, lids and lashes. And in China a 5 000-year-old statue of a goddess was excavated whose lips were red.

Breast implants didn’t just pop up out of Los Angeles bikinis in the Eighties. The first boob job was recorded back in 1895 when Austrian-German surgeon, Vincenz Czerny, performed the first implant surgery using the adipose tissue from a benign lipoma. Until the 1920s, enlargements were done by injecting paraffin into the bust line.

Etcoff says: “Beauty is a universal part of human experience. It provokes pleasure, rivets attention and impels actions that help ensure the survival of our genes.”

But there are some fixed notions of beauty that are innate and widespread. Anitra Nettleton, professor of history of art at Wits University, says the ancient Greeks theorised around notions of beauty and that “not very much” has changed.

“You will find in all cultures an appreciation of people who are symmetrical,” Nettleton says. “The question of wholeness is important in virtually all cultures.”

Symmetry indicates health and mating worthiness, according to RJ Elder, a British researcher who authored the paper, “Background Considerations to Facial Aesthetics”.

A 2005 study at the University of New Mexico in the United States found further direct links between health and looks.

Researchers measured the faces of 400 young people, compared them with health records over three years and ascertained that masculinity in men shows a resistance to infection (particularly respiratory diseases), as does facial femininity in women. But apart from wholeness and symmetry, Nettleton says: “There is really nothing which is universal.”

The question of beauty in various contexts depends on what is perceived by any culture as normal.

Nettleton says the Christian ideal was largely about the unblemished skin whereas, in contrast, Maoris thought tattoos to be a mark of beauty. She warns about attributing notions of beauty across the ages based on poster men and women at the time. To say that Kate Moss was what was considered beautiful in the 1990s would be misleading.

“Her kind of beauty was held up as the ideal by the moguls of the fashion industry, but it did not necessarily constitute a general ideal outside of that media-inspired frenzy.”

In the 21st century even Lady Gaga, lauded as the supposed “freak” of pop, can gyrate on stage dressed in a panda carcass and still remain a skinny blonde babe underneath it all.
Our own alternative pageant drew to a close with a final question to the contestants: “What is beauty to you?”

But manga sex kitten Cherry Thomas — accessorised with pigtails and a lollipop — disagreed: “Beauty is everything. Someone out there will think you’re hot. It’s purely from the perspective of who is looking at it.”

Beauty is, after all, in the eye of the beholder. And future beauty — despite the tattoos and tattered fishnet stockings – will probably look a lot like it does today.

What the kids are wearing
Manga which developed from early Japanese comics and later influenced Japanese films. It often deals with themes of science fiction or fantasy.

The representation of females in manga are typically white or Japanese, and wear sexually suggestive outfits (often resembling uniforms), have big, gleaming eyes and either pigtails, a bob or long, flowing hair. Knee-high socks are a staple fashion accessory and Gwen Stefani’s Harujuku girls are perhaps the most easily recognisable embodiment of manga in modern-day fashion.

Steampunk started as a literary subgenre of science fiction in the 1980s and 1990s. The movement is fascinated by old-fashioned steam-powered machinery and influenced by the works of Jules Verne and HG Wells.

It is inspired by the industrial revolution and encompasses science, fiction and fantasy. Steampunk fashion appropriates formal wear such as three-piece suits and even World War I military uniforms.

For accessories think suspenders, respirators and Amelia Earhart goggles. Natural fibres and dull colours are most authentic, as are leather straps, belts, gloves and boots.