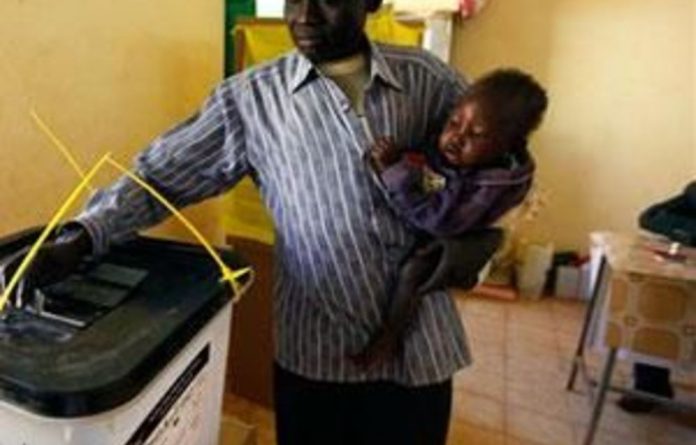 Organisers of a landmark South Sudan independence vote confirmed on Thursday the turnout threshold needed for it to be valid has been reached as former US president Jimmy Carter said the region looked set for nationhood.

Drivers honked their horns in the regional capital, Juba, as southerners hailed the turnout achievement in just four days of the week-long period, saying it showed the importance of freedom to them after five decades of conflict with the north.

“It has reached 60% and even more,” referendum commission spokesperson Souad Ibrahim told Agence France-Presse after Carter, who has been heading an observer mission for the vote, endorsed claims by the south’s ruling former rebels that the threshold had been reached.

“That criterion has already been reached so there is no doubt about the legitimacy of the election as far as the number of voters is concerned,” Carter told reporters. “I think it will meet international standards both on the conduct of the vote and the freedom of voters,” he said, adding he expected the same to be true of the count.

“The likelihood is that the referendum result will be for independence although we won’t know until probably the first week of February,” he added.

‘Exciting news’
Cars draped with the black, red and green southern flag and banners calling for separation sounded their horns as they criss-crossed the potholed dirt tracks of Juba.

At the tomb of veteran rebel leader John Garang, who shortly before his death signed the 2005 peace deal that paved the way for this week’s independence vote ending 22 years of devastating civil war, there was jubilation at turnout achievement.

“This very exciting news — that the vote is recognised, that enough have already voted — makes me feel warm and happy, and to laugh a lot that our referendum is being a success,” said Anthony Lamaya who voted on Sunday on the first day.

“It is proof of how important the referendum is to us that so many came to vote so quickly,” said Mary Kwaje. “We want to get our freedom.”

At the adjacent polling station where southern president Salva Kiir was among the first to vote on Sunday, the giant queues that marked the first four days had reduced to a trickle on Thursday despite calls from the ruling Sudan People’s Liberation Movement for a “100%” turnout.

Carter said the challenge now was to address the outstanding issues between the two sides swiftly ahead of the July date for international recognition for the south set by a 2005 peace agreement with the north.

“I believe that will happen quite quickly after the results are known,” he said.

Carter played down violence in and around the flashpoint district of Abyei on the north-south border over the first few days of the polling period, including a deadly ambush against southerners returning from the north for the vote on Monday evening.

“A few going through Abyei have been actually been physically attacked. That is actually quite a tiny proportion,” he said, noting 160 000 returnees had already come home and that that number was likely to rise as independence loomed.

Indefinite postponement
He said he did not believe the northern or southern leaderships were behind the clashes in Abyei itself, which killed a total of 33 people from Friday to Sunday.

“The reports I have so far are that the national forces of both north and south have been very careful not to get involved in the violent confrontation in Abyei,” he said. “It would be very damaging for [Sudanese President Omar] al-Bashir’s government if he were accused of precipitating violence.”

Nomadic Misseriya Arab tribesmen, who migrate to Abyei each dry season to find water and pasture for their livestock, have been fighting settled pro-southern Dinka for control of the territory.

The district had been due to hold a plebiscite of its own on whether to go with the south or the north, but that has been indefinitely postponed because of disagreement over who should be eligible to take part.

Dinka and Misseriya leaders were due to hold a second day of talks in the South Kordofan state town of Kadugli in the north to discuss their differences over Abyei. — AFP