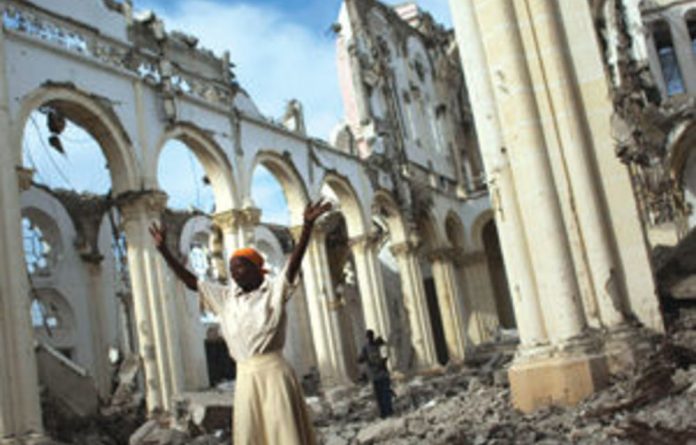 The 20 cholera patients lie in the rickety wooden beds of Port-au-Prince general hospital, their bodies writhing, twisting their bones and skin.

Makeshift toilets in the form of buckets stand underneath their beds. Dr Vital Herve shakes his head as he looks around his ward.

“Here we have to manage however we can,” he says. “We are relying on a tiny state budget and on aid agencies that do not seem to talk to one another. We get antibiotics from some, but sometimes we have to chip in just to get bleach.

“It is still a problem of recovery, but it’s entering a phase of being a problem of development, something I fear will never happen.”

Outside the ward, in the hospital’s corridors, the debris from the earthquake that sent Haiti spiralling into darkness 12 months ago is still piled all around. The smashed concrete and garbage are symbols of a dysfunctional reconstruction system.

The government’s role and the international community’s capacity to deliver and sustain aid effectively are being severely tested. The country is in tatters and there are accusations that billions of dollars in aid languishes in banks, unspent, leaving reconstruction in limbo.

“There’s a lack of leadership from the government and lack of efficiency, transparency and capacity from the international partners,” says Karl Jean-Louis, who heads the Haiti Aid Watchdog. “Today’s situation highlights the lack of coordination between the two.”

Difficulties
Since the minute the goudou-goudou (the onomatopoeic name locals give to the earthquake) made the ground shake and groan, more than 230 000 people have died and about 1,5-million have lost their homes in Port-au-Prince and the nearby cities of Leogane, Jacmel and Petit-Goave. A cholera outbreak that began in mid-October added to the toll, leaving 170 000 people ill and another 3 600 dead.

Despite nearly £10-billion of donations and aid pledges raised for Haiti, today thousands of people still live in the displacement camps and “tent cities” that pockmark the landscape. Many people survive under nothing more than tarpaulins hanging from wooden posts surrounded by piles of rubble. Innumerable white 4x4s sporting various NGO and aid agency logos weave through the debris.

“We need the international aid because it has two things Haitians do not have: the know-how and the money,” says Jean-Louis. “If the money is there, they should prove they could do better, but they haven’t proved it yet.”

But the “nightmare republic”, as Graham Greene called it, has long been one of the most divided and impoverished countries in the world. Even before the earthquake life was not easy — ever present were risks of disease, starvation, hurricanes or gunshots.

Now residents have to deal with the raging cholera epidemic, as well as rapes and lynchings, which have grown in number. A run-off for the presidential election could bring fresh turmoil.

For many Haitians, the near future looks gloomy, marked by the prospect of more suffering, economic uncertainty and political instability.

‘I lost…’
“I lost my husband and my house during the earthquake,” says Asenie Sinois, who lives among the narrow corridors of a tent city in the Carrefour area of the capital. “Last week I lost my son to cholera. I might have to live like a rabid animal in this tent for God knows how long. I see a lot of people around, local and foreign politicians, aid workers, troops from the Minustah [UN mission].

“Are they really helping? I cannot see that. Sometimes I still have to eat garbage or whatever I can find around,” she says, her voice rising.
Incumbent President René Préval is blamed for fostering the situation.

Mirlande Manigat, a candidate in the presidential election run-off, which is expected to be held next month, promises: “If I get elected, I won’t let this country be run by the international aid agencies as they wish, as it has been so far.”

On a cement wall opposite the gate of a Médecins Sans Frontières (MSF) cholera centre, a red rash of graffiti reads: “We want to denounce the NGOs stealing this country.”

“It’s understandable,” says Stefano Zannini, who heads MSF’s Haitian operation. “Before the earthquake NGOs and aid agencies were synonymous with white people having the time of their life, corruption, poor transparency, neocolonialism and the images of the Minustah as an occupation force.

“Now no one knows how many agencies and NGOs are operating here — a lot of people call themselves that. And it is easy to criticise the ones who are at the forefront and show their faces.

“But maybe we have made the Haitians accustomed to NGOs and aid agencies delivering everything.”

Zannini says MSF has spent every penny of the £86-million they raised for the Haiti earthquake campaign. “What I do not get is how some organisations that call themselves ‘humanitarian’ still have money in their pockets,” he says. “Recovery is done; we have to look for longer- and medium-term actions now.”

In the Saint Andre area of Port-au-Prince, not far from the general hospital, a man known in the neighbourhood as “Rubble Jean-Marc” embodies what is now a long-term tragedy.

He was pulled from the rubble three days after the earthquake only to find out that his wife and both his daughters were dead. Immediately after, neighbours say, Jean-Marc lost his senses.

Like the city, 12 months on he is still tattooed in dust. In a ritual he covers himself with debris from the nearby piles of rubble he finds. For a year, only two words have come out of Jean-Marc’s mouth, repeated like a constant tremor — “goudou-goudou”. — Guardian News & Media 2011