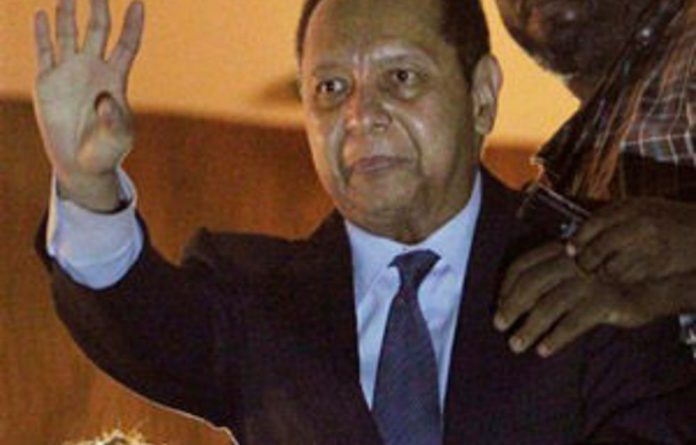 Former Haitian dictator Jean-Claude “Baby Doc” Duvalier made a surprise return from exile to his Caribbean homeland on Sunday, saying he wanted to help in the rebuilding of his earthquake-battered nation.

It was the first time that Duvalier, who is now 59 but was once the world’s youngest head of state at 19, had returned to Haiti since he was forced out in 1986 by a popular uprising and US pressure.

His unexpected return comes at a time when Haiti, still the poorest state in the Western Hemisphere, is facing political uncertainty following November 28 presidential and legislative elections whose preliminary results have triggered fraud allegations and violent street protests.

The chaotic elections went ahead during a cholera epidemic in the country, which is still recovering from a devastating earthquake a year ago that killed more than 300 000 people.

Wearing a blue suit and tie and accompanied by his current French wife, Veronique Roy, Duvalier arrived at Port-au-Prince airport on an Air France flight from Paris, witnesses said.

“I was waiting for this moment for a long time. When I first set foot on the ground, I felt great joy,” Duvalier said, while hundreds of enthusiastic supporters outside the airport chanted “Long live Duvalier!”.

The former ruler, who as a chubby playboy assumed power in Haiti in 1971 on the death of his father, the feared autocratic Francois “Papa Doc” Duvalier, said he had returned to his homeland “because I know the people are suffering”.

“I wanted to show them my solidarity, to tell them that I am here, I am well disposed and determined to participate in the rebirth of Haiti,” he told Reuters, without spelling out his exact intentions.

He was expected to give a news conference on Monday.

Not everyone was enthusiastic about the return of the surviving member of the father-and-son Duvalier dynasty, which marked a 28-year epoch of fear and corruption in Haitian life.

“We are waiting to see what he’s doing here. But it’s not a good thing. I lived under Duvalier,” said one Port-au-Prince resident, Christian Joseph (49).

Some were even afraid to talk about him. “Are you joking? He would kill me. Don’t you know Duvalier?” said another person, who would not give a name.

Past accusations of corruption
During his rule, “Baby Doc” Duvalier had tried to improve Haiti’s image after the rule of terror of his despotic father.

Well aware of the outside world’s contempt for the Tonton Macoutes thugs with their dark sunglasses and pistols who served his “Papa Doc”, Duvalier renamed them “the volunteers for national security”. However, he did not get rid of them.

He had also faced accusations of corruption, political repression and human rights abuses when he fled the country in 1986 during massive street protests and diplomatic pressure from Washington.

However, no current arrest warrants were known to exist against him, and as Haiti’s existing Constitution bans the practice of exile for Haitians, there was nothing legally preventing his return.

A source close to Duvalier said he had returned under a diplomatic passport, but was required to inform Haiti’s Interior Ministry of his whereabouts.

Duvalier’s return adds a new intriguing figure to the turbulent atmosphere in Haiti, just days after the country commemorated the first anniversary of the massive January 12 2010 earthquake.

The outcome of the confused November 28 elections is still up in the air after a team of Organisation of American States (OAS) experts last week delivered a report to outgoing President René Préval challenging the preliminary official results from the vote.

Préval has said he has “reservations” about the OAS report, which recommends that government technocrat and Préval protege Jude Celestin be eliminated from a second round run-off vote in favor of popular musician Michel Martelly.

Préval, accused by opponents of rigging the UN-backed November elections that took place amid widespread fraud allegations, had originally asked the OAS to help verify the disputed preliminary election results.

It was not clear whether Préval would reject the OAS report’s recommendation or seek to discuss his reservations further with the OAS experts. Haiti’s Provisional Electoral Council is the final arbiter of elections in Haiti.

The OAS report, which cited “significant” vote tally irregularities, confirmed opposition matriarch Mirlande Manigat as the candidate who won the most votes in the first round.

She did not gain enough votes to win outright but is in the second-round run-off. But whether this will be with Celestin or Martelly remains to be seen.

Election observers say that even if the CEP heeds the OAS experts’ findings, it still has to complete a disputes settlement procedure before it can formally announce final revised results from the first round vote.

This means Haiti will not be able to hold a presidential election second round run-off before February, at the earliest.

Last month’s protests and violence triggered by the December 7 announcement of the results killed at least four people and increased fears that instability could delay the hand-over of billions of dollars of reconstruction funds for Haiti from foreign donors. – Reuters

Authoritarian leaders have often used natural disasters to tighten their grasp on power. We are seeing the same happen during the coronavirus crisis, in dictatorships and democracies alike
Read more
National

Florence Sosiba, speaks to the Mail & Guardian about how important domestic workers are and exclusion in the COIDA
Read more
Advertising