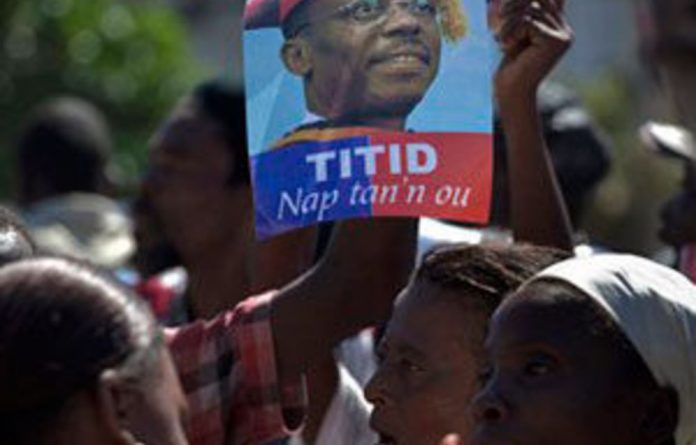 The rumour spread through Lucien Tham’s crowded encampment: Ousted President Jean-Bertrand Aristide had returned! So he joined scores of other Haitians rushing to the airport with his family, spending precious savings on a collective taxi to ride across town after sundown.

It was a false alarm, one of many that have rippled across the Haitian capital in recent days as Aristide requested and received a new passport after his nearly seven-year exile in South Africa.

Yet the eagerness for Aristide’s return shows that the former slum priest remains a powerful symbol of hope for millions, even if others dread the return of instability that Haiti suffered under his rule.

“President Aristide didn’t hurt anybody; he only helped out the poor,” said Tham, a 45-year-old unemployed laborer in the seaside slum of Cite Soleil. “His presence is necessary here.”

Many believe he could arrive any day, heightening anxiety as well as anticipation as Haiti emerges from a political crisis a year after a devastating earthquake.

The slightly built Aristide emerged as a leading voice for Haiti’s poor and became the troubled country’s first democratically elected president, despite opposition from the army, Haiti’s elite and the United States following the 29-year Duvalier family dictatorship.

But Aristide was toppled twice from power, his second term ending in 2004 amid a violent rebellion. He left the country aboard a US plane. Aristide and his supporters insist he was kidnapped. US officials said Aristide departed at his own request.

Through the years, Aristide’s faithful have organised protests demanding his return and his name is often seen scrawled across UN peacekeeping fortresses and other buildings.

Critics accuse the polarising ex-president of breaking promises to help the poor, allowing corruption fueled by drug trafficking and masterminding attacks on opponents with armed gangs.

US officials are among those worried that Aristide’s return could further destabilise a country preparing for a March 20 presidential runoff that was delayed by a political crisis and street disturbances over allegations of vote fraud.

“We would be concerned if former President Aristide returns to Haiti before the election,” State Department spokesperson PJ Crowley told reporters in Washington on Wednesday. “It would prove to be an unfortunate distraction to the people of Haiti.”

Speculation that he might come back soared after notorious ex-dictator Jean-Claude “Baby Doc” Duvalier made a surprise return in January after nearly 25 years of exile in France. The focus quickly turned to Aristide, who said last month he was ready to return “today, tomorrow, at any time”.

Aristide’s US lawyer, Ira Kurzban, travelled to Port-au-Prince this week and picked up a diplomatic passport for Aristide that was suddenly issued by the government of outgoing President René Préval.

Kurzban said he is confident that his client will be back before the run-off vote.

“I think it will be done as quickly as possible. He has a passport so he’s free to return,” Kurzban said during a phone interview from Miami.

Haitian officials say that Aristide has never needed a passport to re-enter Haiti, but might need one to pass through other countries on his way back from South Africa.

But Patrick Elie, a defence official under both Aristide and Preval, said the passport issue was a sideshow manufactured by Aristide supporters to mask the real reason he did not come back: pressure from the country’s powerful foreign benefactors.

“The idea that it was a passport that has kept Mr Aristide from Haiti is a fairy tale, for heaven’s sake. It has never been a matter of a passport. It has always been an issue of whether the key political players want him back.

“And these political players are the global powers of the US, France, Canada,” Elie said in Port-au-Prince.

Elie said he believes Aristide will only return “when all the obstacles are removed” by Washington and other foreign powers that have spent billions to help the country recover from last year’s devastating earthquake, and have pledged billions more for reconstruction.

Some Haiti observers believe there is a sealed US indictment against Aristide for allegedly letting drug traffickers use Haiti and that the US has warned he will be arrested if he returns, said Henry Carey, a Haiti expert and professor at Georgia State University.

But American authorities have never confirmed the existence of any charges.

Fresh scars
If he does return before March 20, some Haiti analysts believe Aristide’s reemergence could trigger more than the usual pre-election violence.

“For his most devoted followers, the scars left by his departure are still fresh. For his enemies, there remains a fear and loathing of him and, for the most part, of the poor urban masses who he counted as his most dedicated followers,” said Robert Maguire, a Haiti expert and professor at Trinity College in Washington.

In Cite Soleil, a gritty shantytown that is an Aristide stronghold, a place lined with burned-out cars and drainage sluices heaped with trash, the laborer Tham insisted “There won’t be any problem when he comes back because the people will be happy to see him.”

One thing is certain: Teeming crowds of Haitians are sure to throng the capital’s streets when they have proof that Aristide has arrived. Less clear is whether militants among his supporters will try to influence the demonstrators with money and guns.

Few analysts believe Aristide’s assertion that he only wishes to come home as a teacher.

Pro-Aristide groups “have been pushing for his return and presume he will become politically active. He probably won’t try to enter this election, but prepare the Lavalas party for the next elections,” Carey said.

Aristide’s return has been a principal demand of his Fanmi Lavalas party, has been barred from recent elections, including November’s presidential vote, on technical grounds.

The head of Lavalas’ executive council, Maryse Narcisse, said Aristide does not wish to re-enter Haitian politics. “He only wishes to help Haiti in the field of education,” she said, echoing Aristide’s statement from South Africa last month.

Carey said that ultimately, Aristide is likely to face a situation much like Duvalier’s: living in Haiti with “heavy security and with the threat of lawsuits”. The 59-year-old Duvalier faces a judge’s investigation into allegations of corruption and human rights abuses during his 15-year dictatorship. He rarely leaves his guarded compound.

Some hope that Aristide’s return will be peaceful and could open the way for a public debate about how the political conflicts of recent decades have created the huge problems of Haiti’s present. Most poor Haitians are convinced that Aristide will help to improve the country’s dismal education system.

“I remember when President Aristide came to my school to give out book bags when I was small. Maybe he could do something like that again, help our students,” said Willie Vilme, a 19-year-old dropout with a quiet voice who says he does little besides hang out with his friends.

But a 25-year-old neighbour, Barthelemy Roody, said it’s irrelevant to worry about violence in Aristide slum strongholds if the ousted leader returns, because violence in Haiti is tragically constant.

“Maybe some people will choose to do violence under Aristide’s name when he comes back. Who knows? But I can tell you there will be violence whether Aristide is here or not,” he said with a shrug of resignation, standing at the side of a rutted street as heavily armed UN peacekeepers who came to help impose order after Aristide’s fall entered a crowded tent camp on one of their daily patrols. – Sapa-AP