In the wake of a passage of rites 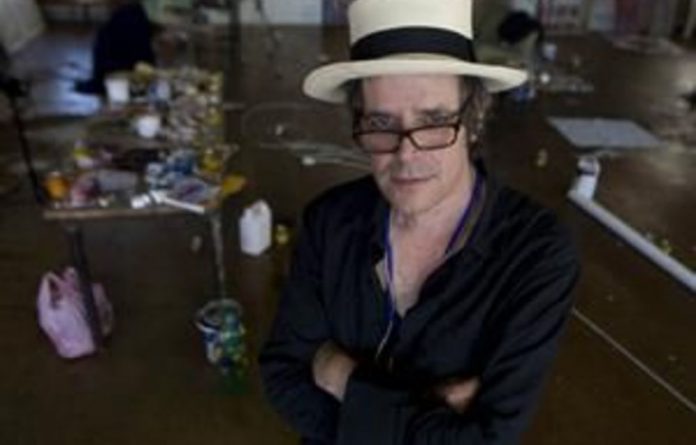 Contemporary South African art is full of mythological beasts with a long and increasingly involved and complicated history. One of those pre-eminent beasts is undeniably the mythological character of Wayne Barker.

Yet labels and categories are awkward things — for one they tend to be radically reductive and often dismissive, with mythological status being as much a burden as it is a veneration.

So often Barker has been referred to as the “bad boy” or “black sheep” of South African art, with his own gallerist, Baylon Sandri, describing him as “rebellious, belligerent, agitative and confrontational”. But this oversight, which can be attributed to Barker’s quintessentially “antic disposition”, fails to address the sensitivity of his production in terms of the significance of his historical relevance.

Barker’s retrospective exhibition, Super Boring, which debuted at the Smac Gallery in Stellenbosch last year and opened at the Standard Bank Gallery in downtown Jo’burg last week, charts a mammoth career that spans more than two decades, beginning in the late 1980s during the era of resistance art.

Since those early days, the agenda of contemporary South African art has nevertheless shifted. But the direction of this shift still today goes unrealised. The shadow of our tarnished history continues to present a burden of literalism — a preoccupation with the past that limits the scope of addressing where we are now and what lies beyond.

Though Barker’s work is historically situated, it manages to avoid this trap. Rather, what is presented is a type of visual diary of Barker’s self-described “rights of passage” through such a traumatic history. Attesting to this is the two-part installation, Memory/Erasure, in the main foyer on the bottom floor of the gallery, which consists of a certificate of discharge from the South African Defence Force dated 1985.

‘Good neighbourliness’
Barker, once a competent footballer by his own admittance, was rendered unfit for military service because of his penchant for marching like Charlie Chaplin, an act he maintained for two weeks.

The other component of this work is a sculptural multimedia installation that consists of a modified washing line draped with sheets of Fabriano. As the washing line spins, two projections from either side of the darkened room beam images on to the makeshift screen, which is perforated by cut out shapes of skulls.

On the right, archival footage of SADF soldiers carrying out the brutalities of the apartheid state is interspersed with the notorious “good neighbourliness” speech by HF Verwoerd. In juxtaposition, serene ocean-scapes taken from Robben Island beam from the opposite side of the room, creating an ambivalent expression of the triumph of the human spirit.

The final and perhaps most stirring element of this work is the musical score of Bob Dylan’s Knocking on Heaven’s Door, which encapsulates the tumultuous conditions of change South Africa has experienced.

Walking up the stairs of the gallery one is then struck by the sheer enormity and range of Barker’s work. In the centre atrium hang four monumental canvasses that on closer inspection are in fact beaded. Working with local crafters, Barker has managed to translate his painterly interpretations of Pierneef into strung glass beads that give a unique incandescence to the surface of the image.

Speaking of his relationship and use of Pierneef’s images, Barker says that he has finally made peace with the painter’s legacy. Early examples of his interpretations of Pierneef’s landscapes present eroded and destroyed surfaces in which Barker inserts an active presence on the otherwise absent and passive terrains.

Much of his work is characterised by a distinct element of pop iconography which is put to use to express the intangibilities of capitalism and colonialism on the African continent. The Coca-Cola motif is a ubiquitous example of this and appears in many of the works from the mid-1990s. Describing its presence Barker tells of the incongruity he experienced on a trip to Mozambique where hospitals were full of vending machines yet doctors were absent.

Thus the pop-inspired origins of Barker’s work tell a very different tale to that of the American movement born in the era of high modernism. His appropriation speaks of a neo-colonial experience of capitalism on the African continent, telling a tale of complicity and negotiating his own role in such a cycle.

Yet what would one mythological beast be without any others and without a fantastical landscape in which to inhabit and live out this jaded task of searching for where we are now? Barker’s work is a testament to such a fantasy, it speaks of the consequence of being South African, and longing to know what and where exactly that is.