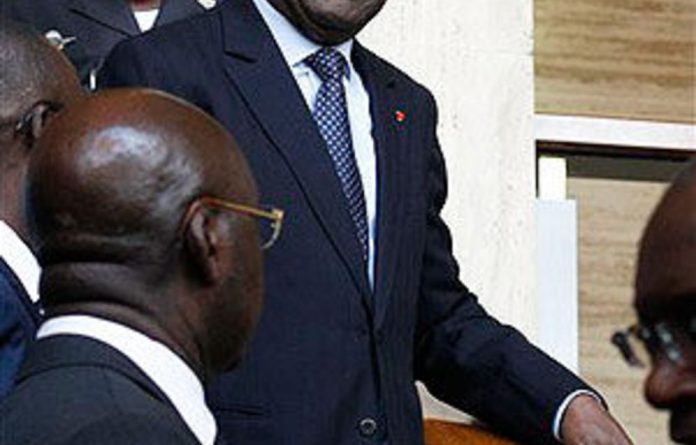 Gunfire and explosions shook Côte d’Ivoire’s main city on Wednesday as forces loyal to Laurent Gbagbo pushed back into an area where gunmen backing his presidential rival repelled them a day before.

“There’s firing everywhere. I’m hearing heavy weapons booming all over the place,” said one resident of the Abidjan suburb of Abobo, where up to 15 Gbagbo loyalists were killed in an ambush on Tuesday.

The clashes between Gbagbo’s forces and backers of Alassane Ouattara, following a disputed election in November, threaten to reignite a conflict in the world’s biggest cocoa producer and dash hopes of reuniting a country split by a 2002 to 2003 war.

Residents said the fighting stopped after four hours of intense clashes. Pro-Gbagbo forces reported three men killed while there was no immediate comment from Ouattara supporters.

Gbagbo has defied international sanctions and pressure to stand down as president, and is backed by a military that has crushed dissent in a series of bloody crackdowns. But his loyalists say they have been provoked by armed supporters of Ouattara, who won the election according to United Nations-certified results.

Before the forces moved into Abobo, Reuters witnesses saw civilians fleeing as military vehicles deployed on the outskirts. The body of a civilian lay in the road near the scene of Tuesday’s battle, the tropical rain rinsing his blood into a red puddle.

As the violence intensified, African presidents aiming to defuse tensions visited both camps to propose a solution.

Paralysis
More than 300 people have been killed since the poll and the stand-off has paralysed the economy of Côte d’Ivoire, propelling cocoa futures to 32-year highs on Wednesday.

A senior officer at army headquarters, who could not be named, said an offensive was launched in Abobo to “re-establish order and security in zones infested by armed elements”

He earlier said 10 to 15 paramilitary police were killed in an ambush during fighting on Tuesday by armed Ouattara supporters.

“We have no idea what is going on. All we know is we can’t stay here in this mess,” one resident told Reuters television.

Military spokesperson Colonel Babri Gohourou told state TV at least one soldier was killed and two gendarmes vanished on Tuesday, but added that the army had killed seven “rebels”.

Seeking a solution
The presidents of South Africa, Chad, Mauritania and Tanzania were in Abidjan for two days this week on an African Union mission to seek a solution to the crisis.

All had left by Wednesday afternoon. An AU statement said they would reconvene in the Mauritanian capital “in the coming days” but expectations of a breakthrough were low.

In a further sign that Gbagbo was digging in, and with February salaries due soon, his government has said it would open two nationalised French banks later this week or next.

Analysts doubt he will be able to make them work, since he has been cut off from West Africa’s central bank system. — Reuters