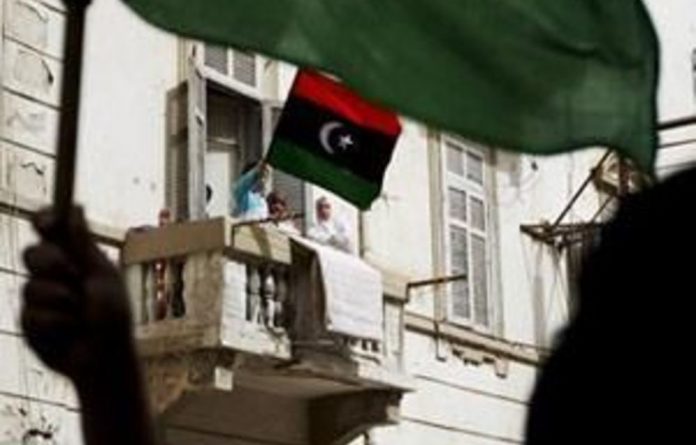 Muammar Gaddafi’s forces were accused of a massacre during an assault on a key city as rebels pushed towards Tripoli and declared themselves Libya’s sole representative on the world stage.

As battles raged east and west of Tripoli and foreigners continued fleeing, both Gaddafi and the rebels appealed for international recognition.

The national council — the embryonic provisional government — made its proclamation at a meeting in Benghazi, the rebel stronghold in the east of the North African country.

“The council declares it is the sole representative all over Libya,” former justice minister Mustafa Abdel Jalil said.

Abdel Jalil, one of the first high-profile Libyans to defect from Gaddafi’s four-decade regime when the uprising began last month, has been appointed chairperson of the 30-member body.

Gaddafi told the French weekly Le Journal du Dimanche he wanted the United Nations or the African Union to probe the unrest and promised “We will let this panel work unhampered.”

In Zawiyah, a strategic centre for anti-regime protests just west of Tripoli, a doctor accused Gaddafi loyalists of committing a massacre by raining tank shells and machinegun fire on residents.

“This was a real massacre. The situation is catastrophic. They killed many people. They killed my daughter,” the doctor told Agence France-Presse (AFP) by telephone.

There were reports tanks manned by Gaddafi’s forces had fired on houses when they launched a fresh assault to capture the city.

Sky News television reported a total of 12 deaths, with 60 injured.

Shooting at civilians
“What happened this morning is horrible. The mercenaries opened fire on anyone who dared go outdoors, even on children,” the doctor said.

“We witnessed a fresh column of tanks coming into the town, at least five. They were loaded up with soldiers,” Crawford said.

“As they went by, the soldiers were shooting at people sitting and standing outside their homes, including a family which has a 10-year-old boy,” she said.

Other tanks attacked elsewhere in the city, Crawford was told.

An AFP reporter saw groups of rebels in the small settlement of Bin Jawad.

A retired soldier-turned-rebel said an advance further towards Sirte would depend on reinforcements and the weather. A dust storm reduced visibility in Ras Lanuf on Saturday.

“We can easily enter Sirte, but we want to avoid the loss of life,” Namil Mashash, a rebel leader in Ras Lanuf, told AFP. “That is why we are negotiating to go to Sirte without fighting and then continue on to Tripoli.”

Defected soldier Ibrahim al-Atrashi said 7 000 men had moved from Benghazi west towards the front in the past three days.

After clashes Friday, the rebels controlled Ras Lanuf, a pipeline hub on the Mediterranean coast with a major refinery and petrochemical complex.

Ragtag rebel force
Hospitals in rebel-held towns to the east said they received up to 10 dead and more than 20 wounded from Friday’s fighting.

The ragtag rebel force said they downed a fighter near Ras Lanuf, killing the two pilots, according to a video seen by an AFP correspondent.

One rebel said: “I want to give a message to America. See these planes? We want a no-fly zone,” something Western powers have so far been unwilling to impose.

At funerals in Ras Lanuf, another man said “there will be rivers of blood … How long will the West hold back and do nothing?”

French Foreign Minister Alain Juppe said on Saturday his country supports the proposal of a UN Security Council resolution to impose a no-fly zone, and that French officials were working with the British on it.

A British special forces unit was being held by rebels in Benghazi following a bungled mission to put a diplomat in touch with them, Britain’s Sunday Times newspaper said, citing sources.

Opponents of Gaddafi “fear he could use any evidence of Western military interference to rally patriotic support for his regime”, it said.

Gaddafi also said three Dutch soldiers captured by his forces in northern Libya during an unauthorised rescue mission were being held prisoner.

‘Why should I leave Libya?’
In his interview with Le Journal du Dimanche, Gaddafi also underscored that the violence posing the greatest challenge to his long rule would have serious repercussions for Europe, which has been facing an uphill battle to stem clandestine immigration, especially from North Africa and Asia.

“Thousands of people from Libya will invade Europe,” he said, “and there will be no one to stop them.”

Libya’s neighbours Tunisia, Algeria and Egypt, as well as France and Italy mobilised on Saturday to receive and repatriate a tide of migrants fleeing the unrest. The United States donated $3-million to the effort.

An estimated 100 000 migrants have crossed the Tunisian border with Libya since February 20, Tunisian officials said.

In comments to the Sunday Times, Gaddafi repeated that he had no intention of going into exile.

“Does anybody leave his own homeland? Why should I leave Libya?”, he said, laughing.

He also denied that his forces had bombed civilian areas.

In Algeria, police on Saturday foiled another attempt by opposition protesters to march in Algiers to demand regime change. – AFP