Made in China, spent in Macau 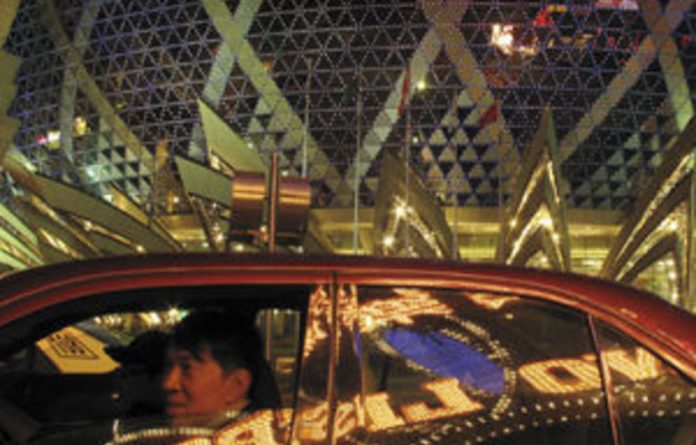 You won’t find the Paiza Mansions on TripAdvisor. You can’t even book the world’s plushest hotel. It chooses you. The 560m² suites (the size of five semi-detached houses) are reached by private elevator and come with two butlers and a masseur. Yet it costs nothing to stay there.

The surprisingly tasteful suites (in spite of the 1,5m-wide end-of-bathtub TVs) are completely free. There’s just the small matter of a HK$10-million to HK$15-million that invitation-only guests are required to spend at the casino. The Paiza Club and Mansions are part of the Macau Venetian, the world’s largest casino and the fifth-biggest building on the planet. And every time you buy something with a “made in China” label, much of the money eventually ends up here.

Think of all the cash issued from all the UK’s ATMs last year. Then ­multiply it by five. Macau’s casinos — the Venetian, MGM Grand, Wynn, Sands, Lisboa, and many, many more — skim about 2,5% from punters, giving them net revenues in February alone totalling HK$19,9-billion. The enormous Galaxy, Hilton, Sheraton and Shangri-la hotels and casinos are still under construction on Macau’s new strip, yet the city is already raking in five times more money than Vegas.

“Macau is not the Las Vegas of the East, Las Vegas is the Macau of the West,” says veteran casino expert Justin Casey of consultants APG. Yet seven years ago there was just one casino on the peninsula. It’s lunchtime on a Tuesday in February and the skies above the former Portuguese colony are a smoggy grey. The sea is a dirty brown, carrying the effluent of the thousands of factories further up the Pearl River, the world’s greatest concentration of industry.

But already the Venetian is half-full of visitors streaming over the border with mainland China. The casino, three times the size of its sister complex in Vegas, cost £2-billion to build. As we walk through acres of baccarat tables, the hospitality manager (he looks after 3 000 bedrooms) tells me the floor space could accommodate 100 jumbo jets. By the end of the day — a quiet one for the complex — more than 65 000 punters have come through the doors.

Post-Mao economic reform
When Deng Xiaoping began the post-Mao economic reform in China, he didn’t anticipate this. The country’s industrial revolution has spawned literally millions of millionaires. While the factory workers are bused into the smoke-filled Lisboa (think Brighton Pier if it stretched to France), the factory owners are helicoptered into the VIP suites. Seventy percent of the money wagered on Macau’s tables comes from the wallets of the Chinese super-rich. But Chinese law forbids its citizens to take more than 20 000 renminbi over the border. So, Macau’s billions rest on a very Chinese solution to capital controls.

On the mainland wealthy punters deposit their money in what are called “junkets”, organisations widely believed to be controlled by triad gangs. Once in Macau the junkets dispense the money back to individuals, and extend credit, often two to three times the amount originally deposited with them. They bring the VIPs to the casinos and are paid huge commissions. Back on the mainland the punters who fail to pay up face menacing debt collectors.

In each major casino the junkets have lavish gaming rooms on private floors reserved solely for their VIP punters who are prepared to buy a bare minimum of £20 000 in gaming chips. The public is not merely roped off, few would even know of the existence of the private rooms. A small army of security guards keeps the public far from view and hundreds of CCTV cameras observe every move.

But the Guardian obtained access to several of the rooms. In the first — and this was on a Tuesday afternoon — were about 20 VIPs, mostly male. Every single bet was for a minimum of £1 600. In the evening it would rise to £3 200. A second room was empty. A third junket room had about 40 players, again playing at £1 600 a hand. The thickly carpeted corridor, the width of a big SUV, stretched hundreds of metres, leading to scores more VIP rooms.

Back on the smoke-filled “mass market” floors, the minimum bets are typically £20, significantly higher than they are in Vegas. But there are no free cocktails or slot machines. There aren’t even smiling faces. Gambling here is a serious business. Why China’s industrious workers, the world’s greatest savers, will squander it all on baccarat remains a mystery even to China experts.

“The Chinese believe in luck. They are willing to gamble a big fraction of their net worth,” says gaming analyst Huei Suen Ng of Credit Lyonnais Securities Asia. But she acknowledges that this doesn’t quite explain what is going on. “Maybe it’s just our culture, maybe it’s in our genes,” she says.

Money-laundering
The other, rather less acknowledged factor, is money-laundering. The junkets take in Chinese renminbi (which cannot be converted on the world’s money exchanges) while the casinos can pay out in dollars. Some critics believe Macau is a gigantic operation for secreting money away from the eyes of the Chinese state. Suitcase loads of dollars take the short hop from Macau to Hong Kong, much of it pouring into the city’s white-hot property market. Even bigger sums are believed to head into offshore tax havens.

The authorities, for now at least, turn a blind eye. The casinos are a huge cash cow for the Chinese state too, which levies tax at 39%. If Macau gets out of hand, Beijing can turn it into a desert overnight by refusing internal visas to mainland China. But the casino operators think that unlikely as the money might instead switch away from Chinese control to Singapore, where two new mega-casinos are already close to matching the whole of Vegas in takings.

Visitors from America or Europe won’t be flocking to Macau’s polluted shores and average room rates — close to £160 a night — would in any case deter them. It is a uniquely Chinese place, with hangar-like casinos encircled by Gucci and Louis Vuitton shops. Vegas-style entertainment is thin on the ground, swimming pools are unused and nightclubs rare.

The average Chinese visitor spends 1,6 days in Macau and uses the time to gamble non-stop. Prostitution is legal, though pimping is not. The daily parade of sex workers in a mall below the Lisboa, dubbed the “Race Track”, draws organised tour groups with cameras rather than many punters. Brits can make money from the tables of Macau without going anywhere near China. Shares in casino operators are among the most popular investments in many emerging market and China funds, though ethical investors may wish to steer clear of what one of my fellow journalists called “the new Sodom and Gomorrah”.

Macau’s casinos are the world’s most profitable. Some repay billion-pound construction costs within a year. London-based Neptune Investment Management, which manages more than £100-million in its China fund on behalf of British investors, has put about 8% of the fund into shares in Sands, which owns the Venetian, and Wynn.

Back in the Paiza the name is taken from a Marco Polo story — the suites are strangely quiet in spite of the hotel’s insistence that occupancy rates are 90% or more. Insiders explain what’s happening. VIPs check into the multimillion-pound suites, then head straight to the private tables. “Over 48 hours they will gamble for as much as 46 hours. The suites are used just as washrooms, really.” — Guardian News & Media 2011