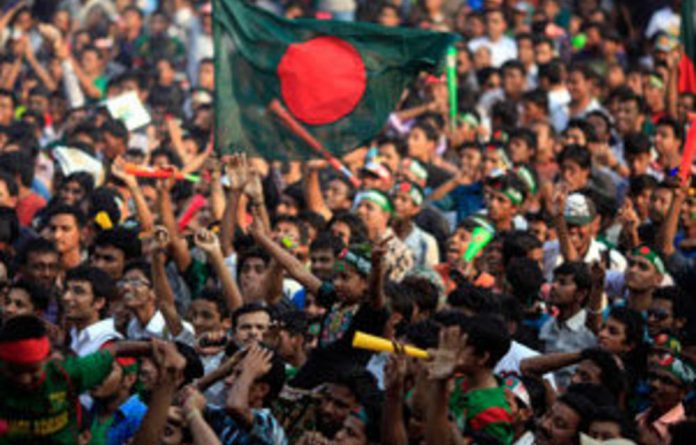 Dhaka is a fairyland at night. Twinkling sparkles of purple, pink, blue, green and gold adorn the streets. To the Western eye, it will seem like Christmas and although that festive time of year is unlikely to have any impact on this mostly Muslim country, it has received some fairly massive presents in the past two months.

It’s the gift of being hosts. Bangladesh is what South Africa was nine months ago: a boisterous puppy dog, proud and eager to show off all its new tricks. Bangladesh’s World Cup marketing, which contrasts starkly with that of its bigger brother, India, which is more interested in promoting its team than the tournament, starts where visitors will, at the airport. Posters are up at all the entrances and exits reminding travellers that they have come to the home of the World Cup.

The team and the Bengal tiger are displayed around the city on buildings and the lights lead all the way to a particular park built on an island in the middle of a busy road. There, lighted figures of batsmen, bowlers and fielders, surrounded by umbrellas, stand. It’s a magical, cricket-themed park, where local families can be seen marvelling at the brilliance.

There may be more electricity in that area than some of them have in their homes, as the cold light of day reveals a harsher, more impoverished Dhaka. It’s a city washed in sepia. All the buildings have that brown-grey tinge to them that makes you want to douse them in sunlight — soap and the real thing — because a thin film of smog blocks out the blue sky. A scene on a Bangladesh street is also apparently a scene from an Indian street about 30 years ago. There are cycle rickshaws, 400 000 of them, men in lungis [sarongs], tiny roadside shops and school kids playing cricket with tennis balls in every spare bit of space they can find.

Sadly, there is very little space. Dhaka is one of only three cities in the country where there is the prospect of finding work and people have come from villages to find it. What they’ve found, mostly, is squalor, poverty and manual labour.

Building boom
There is a building boom taking place, with many sites of construction, all using bamboo for scaffolding, and some will find work there. The textile industry is the other major source of employment. A trip to the Bango bazaar market revealed a maze of stalls selling fabric, mostly cotton, at prices sometimes too low to be legal. Some of the stalls will custom-make a pair of “designer” jeans — just tell them whether it’s the Guess or Levi’s label you want sewn on the back.

At the moment they are mass producing Bangladesh cricket shirts, which sell for 300 Taka (about R30), in the hope that tourists will want a memory from the biggest sporting event to be hosted in the country in its 40-year existence. Had the team performed better, maybe they would.

Bangladesh disappointed fans by failing to make it to the knockout stage of the tournament. They had to beat both associate countries — Ireland and The Netherlands — which they did, and at least one of the big boys, the likeliest of which was the West Indies, who have looked ready to fall apart in recent years. Instead, Bangladesh were bowled out for 58 by the men from the Caribbean to lose by nine wickets. They beat England, but their run rate was too poor to see them through.

They had one last opportunity to qualify, against South Africa last Saturday, but most of the public and even the players, knew it was too great an ask. When they lost, by 206 runs, there was general disappointment but there was also acceptance, much like the feeling when Bafana Bafana could not beat France by six goals in the football World Cup and also bowed out in the first round.

The hosts were out, but the show had to go and it’s done so in Dhaka. The first quarterfinal, between the West Indies and Pakistan, was attended by 23 536 people, in a stadium where the capacity is 25 000 and a sell-out crowd was expected for the second match, between South Africa and New Zealand, on Friday. The stadium may be one of the best achievements of this tournament for Bangladesh. Bangladesh cricket still has a long way to go before it will be able to bring a trophy back to this theatre, but the joy it has gained from hosting this World Cup has given it every reason to strive for it.

More than 17-million children around the world are involved in domestic labour. The recent death of 17-year-old Salome Zacharia in Tanzania highlights their plight
Read more
Africa

By pushing their usually valid complaints onto the streets and the courts, opposition leaders deny governments the popular goodwill and international credibility they need to govern effectively
Read more
Sport