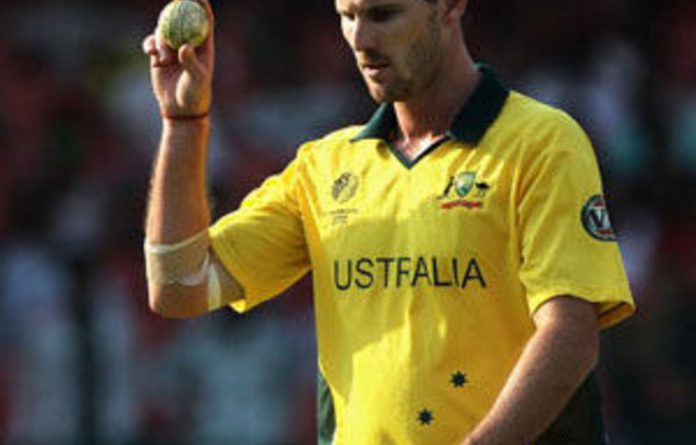 Australia’s Shaun Tait has retired from one-day cricket to concentrate on Twenty20 and preserve his career, the fast bowler said in a statement on Monday.

Tait, who took 11 wickets in seven matches during the ongoing World Cup in the sub-continent, said playing the format year-round for the national team and state side South Australia was taking a toll on his body.

“This is not a decision I have taken lightly but I believe it is one that will help me to prolong my cricketing career through the many Twenty20 avenues available,” he said in a statement released by Cricket Australia (CA).

“In reality, playing all year round for Australia and South Australia is not allowing my body to stand up as I would like and I do not want to be forced into retirement through career-ending injuries.

“Twenty20 cricket allows me to manage my body to a level where I feel I can continue to contribute to the game for some time yet.

“My goal was to hopefully help Australia retain the ICC Cricket World Cup. However, with our involvement now finished I feel it is the perfect time to move on in a new direction.”

Failed
The 28-year-old was a member of Australia’s triumphant team at the 2007 World Cup but toiled at the current tournament and was carted for 1-52 off seven overs in the team’s quarterfinal loss to India last week.

Lightning quick, Tait played 35 ODIs at an average of 23,56, but his withering pace has led to various injuries over the course of a six-year international career.

“Bowling at the speeds he generates places an unusual strain on his body and Cricket Australia respects the decision he makes today,” CA’s cricket general manager Michael Brown said.

Tait’s departure could be the first of many as local administrators conduct a comprehensive review into Australia’s national cricket teams, sparked by the test side’s humbling 3-1 loss on home soil to England in the recent Ashes series.

Australia’s failed title defence at the World Cup has reinforced calls from former players and pundits for fresh blood to re-invigorate the ageing national teams.

Australia will play three ODI matches in Bangladesh from April 9 to April 13.

Ponting captaincy deadline
Meanwhile, under-fire Australia captain Ricky Ponting was given just three days to decide his future on Monday as selectors said the next one-day squad would be announced on Wednesday.

Ponting has already hinted that he may step down.

CA said a squad for next month’s three-match one-day tour of Bangladesh was expected to be announced on Wednesday, effectively setting a deadline for the veteran skipper.

Ponting (36) returned home on Sunday following Australia’s quarterfinal exit from the World Cup at the hands of India, saying he was considering his position this week.

“I’ll have the opportunity over the next couple of days to reflect on where things are headed for me and certainly what direction I feel things are heading for the betterment of Australian cricket,” the Test and one-day captain told reporters.

“I have to really decide what I think is right for me and the team going forward.”

‘Leadership qualities’
Australia play three one-day matches against Bangladesh on April 9, April 11 and April 13, with Ponting previously stating that he wanted to lead the team on the tour.

But Ponting has since suggested he could quit as captain, saying he was prepared to play on under the likely leadership of his deputy Michael Clarke and bat anywhere in the order.

“I see myself as a leader around the group, simple as that, whether I’m captain or not I still think I’ve got a lot to offer as far as leadership qualities go,” he said.

Though heartened by support of team-mates and senior officials, Ponting said he was “absolutely” prepared to drop down the order and step down as captain “if that’s what they [CA] and I believe is the best way forward”.

Ponting, who has been under attack since the 3-1 Ashes series defeat to England, scored a fighting 104 but it was not enough to prevent India from knocking the champions out in last Thursday’s quarterfinal in Ahmedabad.

He has now presided over the end of Australia’s 12-year run as World Cup champions after his third Ashes series defeat as captain to England.

Ponting, who has been captain for nine years, had a difficult World Cup, taking a reprimand from the International Cricket Council after smashing a dressing-room TV in a fit of fury after being run out against Zimbabwe.

He was also criticised for angrily throwing the ball to the ground after colliding with team-mate Steven Smith during their victory against Canada, and for failing to walk in the group match defeat by Pakistan. — Reuters, AFP