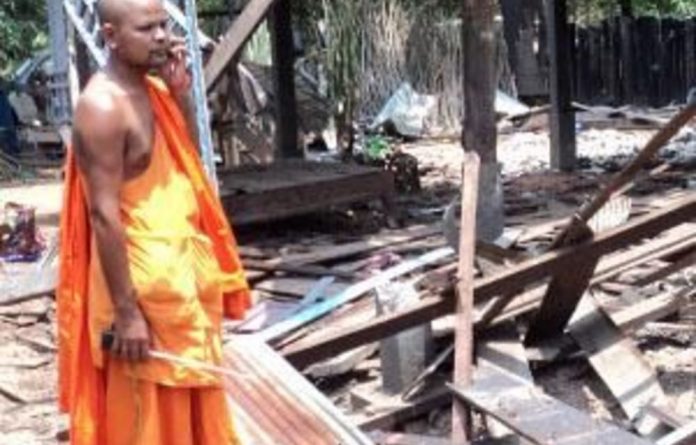 Thailand and Cambodia were preparing for ceasefire talks on Tuesday after a new front opened in their worst border fighting in recent history, in which 13 troops have died.

Tens of thousands of civilians have been forced to flee their homes on both sides as heavy weapons fire pounded the jungle frontier, shattering a fragile truce that had held since February.

“Cambodian Defence Minister Tea Banh has agreed to meet his Thai counterpart in Phnom Penh shortly to discuss a ceasefire between the two countries,” the Cambodian defence ministry said in a statement.

Thai Defence Minister General Prawit Wongsuwon indicated that he was ready for dialogue with his Cambodian counterpart.

“We will have an opportunity to talk and there will be no problem. I think the situation will ease within a few days,” he told reporters in Thailand during a visit to the border area.

Temple tempers frayed
The two armies exchanged fire Tuesday near the 900-year-old Preah Vihear temple, which has been the focus of strained relations between the neighbours since it was granted United Nations World Heritage status in 2008.

“They fired artillery and mortar and we retaliated,” he said.

Cambodia blamed Thailand for starting the clash, which broke out in an area that had been relatively calm for two months and is 150km east of two other disputed temple complexes that have been the scene of fierce fighting since Friday.

In February 10 people were killed near the Preah Vihear temple, prompting a UN appeal for a permanent ceasefire.

She said that the US had engaged directly with Thai and Cambodian officials in hopes of ending the violence, without providing further details.

The neighbours agreed in late February to allow observers from Indonesia into the area near Preah Vihear.

But the Thai military has since said the monitors are not welcome and they have not been deployed.

Thai Foreign Minister Kasit Piromya said on Tuesday that Bangkok would review its policy towards Cambodia including trade, border checkpoints and cooperation at all levels, but would not sever diplomatic ties.

Kasit is due to hold talks with Indonesian Foreign Minister Marty Natalegawa, whose country is the current chair of the Association of Southeast Asian Nations regional bloc, on Thursday in Jakarta.

Contested terrain
The World Court ruled in 1962 that the temple belonged to Cambodia, but both countries claim ownership of a 4,6 square kilometres surrounding area.

Thailand said nearly 26 000 people had been evacuated on its side of the border and were being housed in 22 shelters. Three districts — Phanom Dong Rak, Kap Choeng and Prasat — have been declared emergency areas.

More than 23 000 people have been displaced by the fighting on the Cambodian side, authorities have said.

Cambodia has accused Thailand of using spy planes and poisonous gas in the recent fighting — which Bangkok has strongly denied.

Prime Minister Abhisit Vejjajiva on Monday said he hoped the border situation would improve before he meets his Cambodian counterpart Hun Sen at a regional summit on May 7 to 8. — AFP