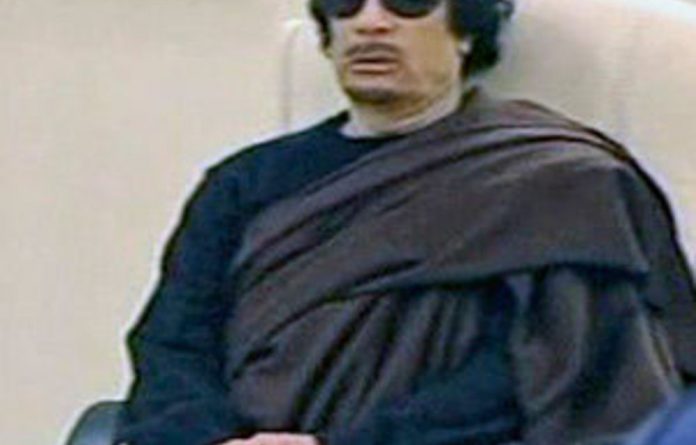 The Libyan leader, who had not been seen in public since the April 30 strike on his Tripoli compound killed his youngest son and three of his grandchildren, made his appearance on Wednesday in his trademark brown robe, dark sunglasses and black hat.

“We tell the world these are the representatives of the Libyan tribes,” said Gaddafi, pointing to the officials and naming a few of them.

“You will be victorious,” an old man told Gaddafi, referring to the three-month-old revolt in the North African country against the Libyan leader’s 41 years of rule.

A screen behind Gaddafi showed a morning chat show on state al-Jamahirya television. A zoom-in on the screen showed Wednesday’s date displayed in the corner.

Reuters journalists based at the same hotel said some rooms had been sealed off during the day for an event, but they had not seen Gaddafi. In the past he has made high-profile entrances accompanied by a large staff of minders and aides.

A Reuters correspondent said he heard at least two blasts in Tripoli early on Thursday and that they were believed to have been the result of Nato strikes. The blasts rattled the windows of the hotel, he said.

Libyan officials said two people had been killed in Nato strikes and showed foreign journalists two bodies at a hospital. Staff at the hospital said they had treated more than 20 people who had been wounded.

On Wednesday, rebels trying to overthrow Gaddafi said they had captured the airport in the city of Misrata in heavy fighting. Hailing it as a major victory, the rebels said they had also seized large quantities of weapons and munitions.

No independent verification of the rebels’ account was available.

Misrata, besieged by Gaddafi’s forces for eight weeks, is strategically important to rebel hopes of winning the war because it is the only city they hold in the west of the North African country. It also has a key port.

The war, linked to this year’s uprisings in other Arab countries, has reached a stalemate. The rebels hold Benghazi and other towns in the oil-producing east while the government controls Tripoli and almost all of the west.

Thousands have been killed in the fighting.

Tripoli’s consul in Cairo said he was quitting his post to join rebel ranks, the latest Libyan official to break ties with the government.

“We don’t trust Gaddafi … This is not the time for a ceasefire because he never respects it,” said a rebel spokesperson called Abdulrahman, speaking by telephone from Zintan in the Western Mountains region.

“He bombards civilians immediately after his regime speaks of willingness to observe a ceasefire,” the spokesperson said, adding that Gaddafi’s forces fired 20-25 Grad missiles at rebels on Wednesday, killing one and wounding three.

Gaddafi’s government has made several ceasefire declarations but has continued attacks on Misrata and other rebel-held areas including the Western Mountains near the Tunisian border.

The government says the rebels are armed criminals and al-Qaeda militants and that the majority of Libyans back Gaddafi.

It says Nato’s intervention is an act of colonial aggression by Western powers intent on stealing the country’s oil. Nato says it wants to protect Libyan civilians.

In an effort to drum up more aid for the rebels’ cause, one of their senior leaders will visit London on Thursday.

The United States has also been providing the rebels with help, delivering its first shipment of food rations as part of a $25-million non-lethal aid package. – Reuters