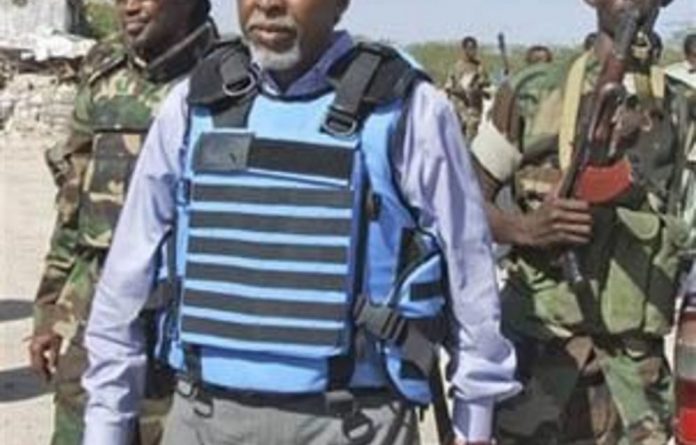 Major Paddy Ankunda said on Saturday the AU force is on alert after al-Qaeda-linked militants of al-Shabab vowed to carry out “brazen attacks deep inside enemy territory”.

An explosion on Friday in the home of Somalia’s interior minister killed him and a woman suspected of being a bomber as violent demonstrations swept the capital.

Security guards and soldiers opened fire on stone-throwing protesters angry at an agreement calling for the ouster of the country’s popular prime minister, killing two people, an official and witnesses said.

Interior Minister Abdishakur Sheik Hassan, who also was minister for national security, died after shrapnel hit his legs and other part of his body, said Ministry of Information spokesperson Abdifatah Abdinur. He was earlier taken to a hospital in critical condition. Abdinur said a dead body of suspect was found in the home.

Mohamud Abdullahi Weheliye, a member of Parliament and a relative of Hassan’s, said the minister’s niece carried out the attack and that she was “sent” by al-Shabab,” an Islamist militia with ties to al-Qaeda. The group has carried out suicide bombings in the past, including ones that targeted government officials. There was no immediate official confirmation of Weheliye’s account.

Abdinur said officials were investigating to confirm it was a suicide attack in the two-story, gated building that is normally well protected. The explosion reportedly took place in the sitting room.

“The walls of the sitting room cracked and blood and debris were scattered all over,” said Mohamed Mohamud, a witness who visited the site after the explosion. The house is near the Foreign Ministry and in a neighbourhood inhabited by government officials and members of parliament.

For a country that has been swept by war and anarchy for two decades, Friday was a particularly bloody day and came barely two days after President Sheik Sharif Sheik Ahmed and the speaker of Parliament signed an internationally mediated agreement extending the government’s term by a year. It postponed an August presidential election until 2012 to give leaders more time to deal with security and political issues.

In the wake of that agreement, things took a turn for the worse in this Horn of Africa nation.

Security guards opened fire on protesters, killing a teenage boy, after demonstrators threw stones at a hotel where lawmakers were staying, a military official said. A witness said soldiers shot a fellow soldier who joined the demonstration.

Demonstrators said they will continue protests until they are assured that Mohamed will not have to leave office despite the UN-backed accord signed in Uganda that is supposed to pave the way for the formation of a new government.

Protesters say the president sacrificed the high-performing prime minister to stay in power.

“Prime Minister Farmajo is the only leader who cares about Somalia,” said protester Faysal Abdullahi. “He cleaned the government. We will not stop the protests until we’re assured that he will not resign.”

Another protester, Hamdi Ahmed, who scrawled “Farmajo Victory” on her face, said Mohamed is her only hope for peace in Somalia.

“We love the prime minister. He helps the poor. I have not seen any leader with his quality,” said 17-year-old Ahmed.

Popular
Mohamed, a Somali-American, is popular with many Somalis because he has managed to pay salaries to government workers and soldiers, and has fought corruption. In his seven-month stint, Mohamed’s government has wrested large swaths of territory from al-Shabab in Mogadishu and southern parts of the country.

The government once controlled only a few square kilometres near Mogadishu’s seaside airport. AU officials say they now control half the city after they launched a major offensive at the beginning of the year.

Abdullahi said several bullets hit a soldier in the face and neck as he shouted pro-Mohamed slogans in Mogadishu’s Dharkinley neighbourhood. The soldier was wearing army fatigues and held a picture of the prime minister, he said.

Colonel Ahmed Abdinur, a Somali military official, also confirmed the death of a teenager who was shot dead after a security guard fired at a crowd demanding that the prime minister remain in office.

Protesters then set the hotel on fire, said demonstrator Abdiqadir Ahmed Mohamed who was at the scene. — Sapa-AP