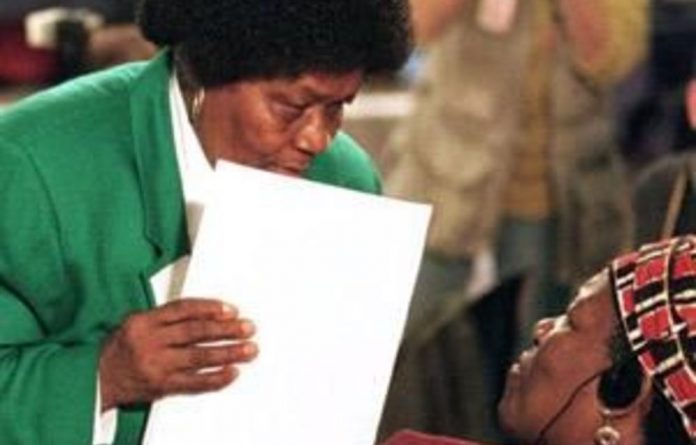 Albertina Sisulu’s name has become synonymous with the struggle for freedom, justice, human rights and human dignity, President Jacob Zuma said at her funeral in Soweto on Saturday.

“We have gathered to celebrate the life of an outstanding patriot,” he said during his eulogy at Orlando Stadium.

“We are laying to rest a stalwart and mother of the nation, who combined resilience and fortitude in fighting colonial oppression and apartheid, with compassion for the poor and the downtrodden.”

Albertina Sisulu, who died at the age of 92 in her Linden home on June 2, was one of the last of a generation of leaders venerated as struggle heroes. Watch our slideshow of key moments in her life.

Zuma said very few people could say they had served their country and people with the dedication, commitment, sacrifice, loyalty and respect that Mama Sisulu had done.

Before Zuma took the podium at the 40 000-seat stadium in Soweto a praise singer gave him an introduction.

As Zuma took the stage he started singing Thina Sizwe. The crowd joined in.

During his eulogy he highlighted the work she had done during the struggle.

In 1994 she was elected to the first democratic Parliament, which she served until retiring four years later. She was a deputy president of the ANC Women’s League, a nurse and a midwife, and took part in the formation of the United Democratic Front, the 1956 anti-pass march to the Union Buildings and the launch of the Freedom Charter.

“The passing of Mama Sisulu, soon after that of Ntante Henry Makgothi, is a stark reminder that an outstanding, dedicated, committed and illustrious generation of leaders is departing,” Zuma said.

He said Sisulu had done exceptionally well as a single mother while her husband Walter Sisulu was in prison.

“She produced some outstanding and committed cadres and leaders of the liberation movement, who now serve the nation in important portfolios and capacities.”

Max Sisulu is speaker in Parliament and daughter Lindiwe Sisulu is the national defence minister.

“There aren’t many political families in our country with that kind of achievement.

“The Sisulu grandchildren are indeed fortunate to have such parents and grandparents … they have a huge responsibility to take that family legacy even further,” he said.

‘Part of my being’
Zuma extended condolences on behalf of government and the country to the Sisulu family.

“Your loss is our loss, your pain our pain. Few countries are blessed with a mother of the nation of the calibre of Mama Sisulu.

“Hamba kahle Mama Wethu! Siyohlale sikukhumbula njalo [Go well our mother. We will be thinking of you all the time.],” Zuma said.

In a tribute by former president Nelson Mandela, read out by his wife Graça Machel, he said Sisulu was part of his being.

“I want to bid farewell to a comrade and friend,” Machel read.

“You are part of my being, you and Walter … I want to express my deep gratitude to you.”

‘Too painful to see you go’
Mandela said for the first time it was not him consoling his family but them consoling him.

He said he hoped the Sisulu and Mandela families would continue to stand shoulder-to-shoulder as they had done in the past.

“The years have taken the toll on us, one by one friends and comrades have passed on and it feels like a part of oneself has been cut off.”

He said Sisulu, his “beloved sister”, was the biggest loss.

He would have loved to have been at the funeral to pay his personal respects but it was “too painful to see you go”.

He said he could imagine Sisulu meeting other comrades who had gone before her and named a few such as her husband Walter Sisulu, former anti-apartheid politician Oliver Tambo and former activist Helen Joseph.

“Thank you for your love. Big hug to all our comrades. Your brother, Madiba.”

The dignified way
Max Sisulu said his mother was the centre of her children’s lives.

“She was a dominant presence in our lives and it will be difficult to imagine life without her,” he said during a tribute to his mother on behalf of his siblings.

Sisulu’s grandson Ginyi Sisulu, paid tribute to his grandmother on behalf of all the grandchildren, saying “She taught us to always behave in a dignified way — when she scolded us we were deeply hurt”.

Sisulu was buried at Croesus Cemetery in Johannesburg next to her husband Walter Sisulu, who had died in 2003. She was given a military send-off by the guards of honour.

Her family paid their last respects as they threw a handful of sand and rose petals into the grave.

Her funeral was attended by family members, dignitaries, government officials and ANC heavyweights.