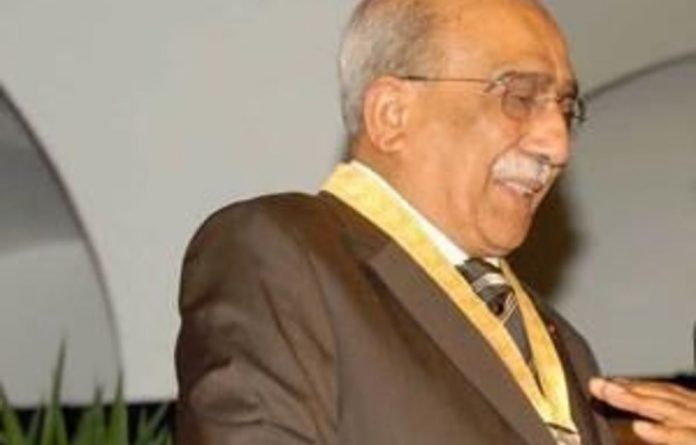 E news reported that Asmal died at the Constantiaberg Medi-Clinic in Cape Town after suffering a heart attack and slipping into a coma. He was 76 years old.

Asmal was the minister of water affairs and forestry from 1994, a member of the ANC’s national executive committee, and education minister from 1999 to 2004.

Asmal had moved away from mainstream ANC thinking in recent years, speaking out against the party’s proposed Protection of Information Bill and the formation of a media appeals tribunal.

Early years
Abdul Kadera Asmal was born on October 8, 1934, to a middle-class family of Stanger (now Kwa-Dukuza) in KwaZulu-Natal.

Asmal later recalled that the decisive moment in his political growth was when he saw footage of Nazi concentration camp victims. That prompted his decision to become a lawyer, so he could oppose the Nazi mentality, which he likened to apartheid.

In his matric year he saw the Defiance Campaign’s leaders marching in prison uniforms through his town’s streets. His response was to lead a stay-away from his school.

After starting his studies for his teacher’s diploma in Durban in 1953, he strengthened his ties with Luthuli, his mentor, who had been banned and restricted to Groutville, near Stanger.

While teaching, Asmal obtained a BA degree through the University of South Africa.

In 1959 he went abroad to study law. He graduated from the London School of Economics four years later.

After qualifying in Britain and Ireland as a barrister, Asmal lectured as Trinity College for 27 years as a law professor, concentrating on labour, international law and human rights, during which time he rose in the estimation and regard of his ANC comrades, who raised him to the party’s constitutional committee from 1986. He became a key member of the ANC’s national executive committee in 1990, when he returned to South Africa.

Asmal was a member of both the London and Dublin bars and obtained two master’s degrees during this time.

Political career
He was a founder member of both the British and Irish Anti-Apartheid Movements, and chaired the latter for nearly three decades.

He also served as vice-president of the International Defence and Aid Fund for Southern Africa from 1968 to 1982, and as president of the Irish Council for Civil Liberties between 1976 and 1990.

He was involved with civil rights campaigns elsewhere in the world, including Northern Ireland and Palestine. Asmal participated in a number of international inquiries into human rights violations.

In 1983 he was awarded the Prix Unesco of the United Nations Educational, Scientific and Cultural Organisation in recognition for his work in the advancement of human rights.

He was elected to the ANC’s national executive committee in 1991 and was one of the party’s delegates to the Convention for a Democratic South Africa (Codesa), as well as the subsequent Multi-Party Negotiating Forum.

In the April 1994 general election, Asmal was elected to Parliament, and was appointed by Nelson Mandela to lead the department of water affairs and forestry, a portfolio he oversaw until 1999, when then-president Thabo Mbeki asked him to serve as minister of education, a position he held until 2004.

Asmal left Parliament in 2008 to take up a post at the University of the Western Cape where he was professor extraordinary in the faculty of law.

This also appeared to mark a move towards greater independence from the ruling party, with Asmal not hesitating to criticise when he believed government was wrong.

Opposing secrecy
A vocal opponent of the Protection of Information Bill, Asmal had recently urged South Africans to reject the Bill, and warned the ANC that rushing it through Parliament would destroy trust in the democratic process.

Last week he urged South Africans to reject the Bill and warned the ANC that rushing it through Parliament would destroy trust in the democratic process.

Asmal said he had hoped the weight of public opposition to the so-called “Secrecy Bill” would have persuaded the relevant ministers and MPs “to take this appalling measure back to the drawing board”.

“Since this has not happened, my conscience will not let my silence be misunderstood. I ask all South Africans to join me in rejecting this measure in its entirety,” he said in a letter sent to the Right2Know Campaign, a coalition heading opposition to the legislation.

“The Bill is so deeply flawed that tinkering with its preamble by accepting a minor change here or there will not alter its fundamental nature — that it does not pay sufficient attention to the nature of freedom of expression.” he said.

Target of criticism
Before that, Asmal was just as vocal in his opposition to the disbanding of the Scorpions.

ANC youth league leader Julius Malema, “tenderpreneurs”, and the National Youth Development Agency have also recently been the target of his criticism, with the NYDA being described as worse than a farce.

In 2009, he described then deputy police minister Fikile Mbalula’s idea of militarising the police service as “craziness” and smacking of “low-level political decision-making”.

“The new administration is referring to the militarisation of the police,” Asmal told the Cape Town Press Club. “I have this former head of the youth league [Mbalula] who aspires to be secretary general of the ANC. Ha, really, I hope I won’t be alive.

“He said we must militarise the police. We spent days and days in 1991 to get away from the idea of a militarised police force. Extraordinary.

“This is a kind of craziness all of us have to take into account. It is part of that low-level political decision-making without reference to the Cabinet,” he said.

In earlier days, besides his role in the anti-apartheid struggle and pro-human rights endeavours, Asmal will be remembered for his efforts to supply clean water to the poor and the rural people of South Africa during his tenure as water affairs minister from 1994.

As education minister from 1999 he vigorously continued and extended the reforms of his predecessor, Sibusiso Bengu, while taking stock of what had been done.

Asmal is survived by his wife, Louise, and their two sons and two grandchildren. — Additional reporting by Sapa.

Sudanese stand ground against coup as condemnation pours in

On Monday soldiers detained Prime Minister Abdalla Hamdok, his ministers and civilian members of Sudan's ruling council, who have been heading a transition to full civilian rule
Opinion