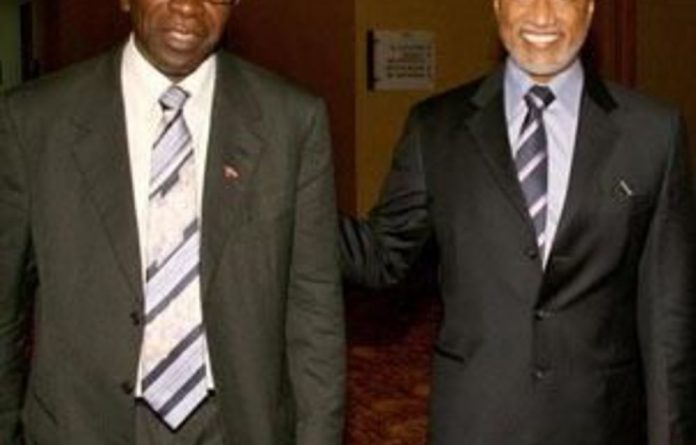 Fifa’s ethics committee found “comprehensive, convincing and overwhelming” evidence that Mohamed bin Hammam and Jack Warner were involved in attempted bribery, according to the preliminary report that led to the suspension of the two officials.

Trinidadian Warner resigned as a Fifa vice-president and president of Confederation of North, Central American and Caribbean Association Football on Monday, prompting the sport’s governing body to drop an investigation into bribery allegations against him and leaving “a presumption of innocence”.

The ethics committee’s report, compiled by Namibian judge Petrus Damuseb last month and seen by Reuters on Wednesday, said there was a “compelling case” that Bin Hammam was engaged in an act of bribery and that Warner was an accessory.

The ethics committee acted on that evidence by suspending the pair. Qatari Bin Hammam had by then pulled out of Fifa’s presidential campaign, leaving Sepp Blatter to win a fourth term unopposed.

Bin Hammam said on Wednesday he had done nothing wrong while Warner, who also denied any wrongdoing, hit out at the way the document had been leaked to the media.

Fifa said it had no comment on the report.

The claims centre on a meeting of the Caribbean Football Union (CFU) in Trinidad in May.

“The comprehensive, convincing and overwhelming evidence permits to conclude prima facie that the accused [Warner] has initiated and arranged a special meeting of the CFU member associations for Mr Bin Hammam,” the report says.

“Furthermore on the occasion of this meeting it seems that Mr Bin Hammam offered, at least indirectly and under the pledge of secrecy, to each of the member associations an envelope containing $40 000.

Primary opinion
“The Fifa ethics committee is of the primary opinion that the accused [Warner] had knowledge of the respective payments and condoned them.”

The report adds: “The committee is also of the opinion that the respective money gifts can probably only be explained if they are associated with the Fifa presidential elections of June 1 2011.

“Therefore it appears rather compelling to consider the actions of Mr Bin Hammam constitute prima facie an act of bribery, or at least an attempt to commit bribery.

“… It appears prima facie impossible, in the opinion of the Fifa ethics committee, that the accused [Warner] could have considered the money distributed on the occasion of the special CFU meeting as legally or ethically proper and without any connection to the upcoming Fifa presidential election.

“Consequently the accused would at least be considered as an accessory to the aforementioned violations.”

Bin Hammam issued a statement via a spokesperson re-affirming his denial of any wrongdoing.

“There is nothing I can say more than I deny the allegations and insist that I have not done anything wrong during the special congress at Trinidad,” he said.

‘Malicious agenda’
Warner said in a statement: “I, Jack Warner, did not partake in the distribution of any cash gifts to my members.

“I hope for the good of the game, good sense will prevail, or at least I will continue to live in hope.”

Warner was also angry about what he called the “anonymous leaks to the media in an investigation that is still ongoing”.

“I can only therefore conclude that this development is part of an ongoing malicious agenda to destroy the cohesion which has made the Caribbean Football Union a factor to be reckoned with in Fifa affairs; and thus diminish the CFU’s significance in various areas of Fifa decision making.”

Trinidad and Tobago’s parliamentary opposition later called on Prime Minister Kamla Persad-Bissessar to fire Warner from his position as transportation minister in her government.

“It is wholly unacceptable for an individual to be so disgraced in an international organisation, falling short of matters of ethics and integrity and still be allowed to remain as a Cabinet minister,” Keith Rowley, an opposition leader, told reporters. — Reuters