Stripped naked, our racist past is ugly 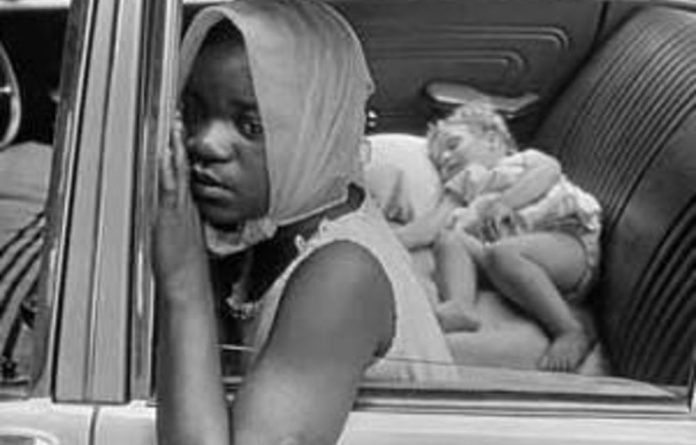 The monochrome photographs begin in the early 1960s with his days at Drum magazine. This window into the recent past presents us with what can be considered another country altogether — a country divided into black and white. Berry focuses on these contrasts — there is little room for ambiguity here.

A group of Basotho men sit outside a trading post wrapped in blankets wearing big hats. A doctor examines a woman on a storeroom floor, against a backdrop of Five Roses tea in wooden boxes. Here are miners at work, shebeens and severe-looking Afrikaners celebrating Blood River.

A young girl, scarcely more than a child, looks after a baby for a white family. (1969)

Berry captures half a century of squatters in the country with various images of despair, but also of hope. One photograph shows a woman sitting on her bed with her head in her hands apparently crying and a small child standing beside her.

They are surrounded by furniture and possessions in closed suitcases, strapped up and waiting to be opened. The only thing lacking is four walls and a roof.

Images range from mannequins, musicians and massacres to fishermen, fascists and family life, Afrikaners, Zulus and the Zion Christian Church, with pass burnings and police beatings along the way. Policemen hit Africans with sjamboks in the early pictures, and the AWB in later ones.

Arriving in South Africa in the early 1950s, aged just 17, Berry started off at the Benoni City Times.

Fateful day
He was drawn to Drum by the arrival of Tom Hopkinson from the Picture Post. It was only then, after travelling with his African colleagues, that he became politically aware. Berry recalls Jim Bailey, the owner, as ‘a total shit — he paid me twice as much as my African colleague Peter Magubane”.

In an interview, his mood darkens as he describes one fateful day in Sharpeville when he was the only photojournalist on the scene. He tells of how the shock of being fired at gradually seemed to sink into the crowd. ‘They assumed the [police] were firing above them.” People started falling around the photographer — a woman was shot right next to him. Taking cover in the grass, he managed to photograph the police reloading to shoot into the backs of those fleeing. ‘So when the shooting stopped I was the only person left in the field. Everyone else was either dead or gone.”

Waiting the arrival of Nelson Mandela in Lamontville. (1994)

He later testified in court against the police who had tried to charge some survivors.

Shortly after this tragedy Berry left for Paris, where he was later invited by Henri Cartier-Bresson to join Magnum. ‘I did keep going back, I don’t know how many times I went back. It became obvious to me that the only way I could portray the racial situation was to show black and white reactions of people to each other on the street.”

It would have been easy simply to photograph the madam with her maid. ‘But I felt that wasn’t enough, and trying to show that tension on the street was pretty tricky; you had to spend a lot of time walking around and grasp the situation as it came up.

An outsider
‘I was looking for something that illustrated what I thought was unacceptable.” Eventually he was banned from the country.

Returning after Mandela’s release, Berry followed the run-up to the democratic elections. The exhibition concludes with fairly recent shots of poor whites down on their luck, and black children drinking from a dirty stream because the farmer was watering his crops that week.

Being an outsider you have ‘a visual photographic advantage”, Berry says, ‘because you are looking for things that are unusual, and you’re still seeing them with a fresh eye.”
In Liverpool Berry’s images kindle an unremembered past, but to many South Africans it will be all too familiar — images of an unforgotten pain.

Cheerful despite the rain in Alexandra township (1995)

Living Apart: Photographs of Apartheid by Ian Berry is part of the Look11 photography festival at the International Slavery Museum.
More at: liverpoolmuseums.org.uk