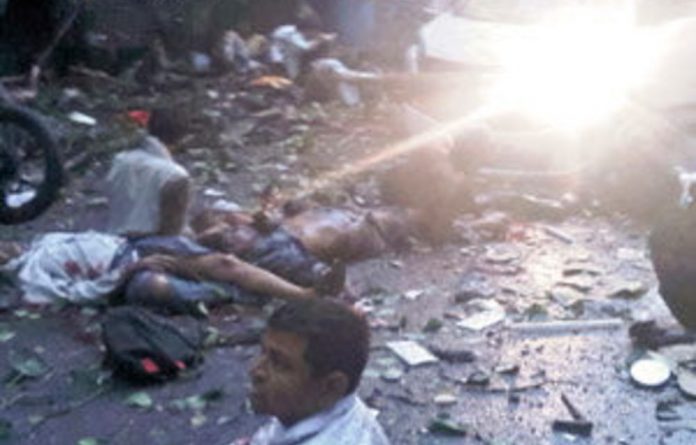 India has remained jittery about the threat of militant strikes, especially since the November 2008 attacks which killed 166 people and raised tensions with nuclear-armed arch rival Pakistan.

At least 100 people were wounded on Wednesday and preliminary reports showed the death toll had risen to 20 in the attacks, centred mainly on Mumbai’s jewellery trading centres, Umesh Sarangi, a senior government official, told Reuters

“This is another attack on the heart of India, heart of Mumbai. We will fully meet challenge, we are much better prepared than 26/11,” Prithviraj Chavan, the state’s chief minister, told NDTV broadcaster, referring to the 2008 attacks.

“The blast occurred at about 6.45pm (1.15pm GMT) within minutes of each other. Therefore, we infer that this was a coordinated attack by terrorists,” Chidambaram told reporters.

“This tactic is much more in line with those used by more amateurish groups such as the Indian Mujahideen who have targeted crowded urban areas before,” Stratfor, a strategic affair think tank, said in a statement.

Television images showed blaring ambulances carrying away the bloodied people at one of the attack sites. Other images showed bodies lying among glass and metal debris in narrow streets.

At the Dadar area in central Mumbai, one of the explosions left car windows shattered and uprooted electric poles. Police used sniffer dogs to look for clues while the public helped paramedics carry away some of the injured.

Opera House attacked
The biggest blast occurred at the Opera House, once housing operas and now an area selling diamond jewellery and a hub for diamond traders in the city. Pakistani-based militants carried out a bloody rampage in 2008 near this area.

There was no immediate indication any Pakistan group was involved.

But any suggestion of attributing blame to Islamabad would complicate a fraught relationship with India and further unravel ties with the United States, which has withheld some military aid to Pakistan to pressure it to buckle down in the war on terror.

“We came outside, and the area was filled with black smoke,” said Aagam Doshi, a local merchant and witness. “There were bodies lying all over the street, there was lots of blood … We saw many bodies missing arms and missing legs.”

“We began helping get the wounded on to motorcycles of diamond merchants … There were diamonds lying on the road everywhere.”

Another blast, also in south Mumbai, was at the Zaveri Bazaar, India’s largest bullion market.

The third blast was at Dadar, in the centre of the city, near the main railway tracks.

“When I heard of the blast, I tried to call my husband because I knew he was in Dadar. Next thing I know someone picked up the phone and said he was admitted to KEM (hospital) so I came here,” said Rinku Vishwakarma. “I have no idea how badly he is injured. I’m looking frantically for someone to help.”

Obama offers help
US President Barack Obama strongly condemned the attacks and offered support to bring the perpetrators to justice.

The attacks took place as New Delhi and Islamabad hold a series of talks to normalise relations. The foreign affairs ministers were due to meet later this month.

They came two days after the fifth anniversary of a series of train bombings in Mumbai that killed 188 people, many of them diamond merchants, an attack also blamed on Pakistan-based militants.

Lashkar-e-Taiba
The Pakistan-based Lashkar-e-Taiba group, long focused on fighting Indian rule in Kashmir, was blamed for the 2008 attacks.

Several bomb attacks in large Indian cities in recent years have been tied to the Indian Mujahideen, a home-grown Islamist group said to have support from Pakistan-based militants fighting Indian rule in the northern disputed region of Kashmir.

The home ministry ordered security heightened across the country.

Mumbai has over the years been the target of several attacks, including serial bomb blasts in 1993 that killed at least 260 people at the stock exchange and other areas. — Reuters