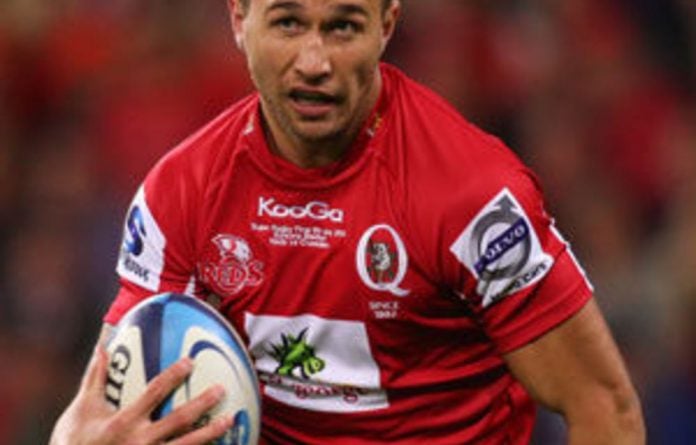 Inspirational halfbacks Quade Cooper and Will Genia have been restored to Australia’s line-up for Saturday’s Tri-Nations opener against South Africa as the Wallabies look to put their shock defeat to Samoa behind them.

Flyhalf Cooper was rested and scrumhalf Genia benched for last weekend’s 32-23 upset in Sydney after helping the Queensland Reds to the Super Rugby title the previous weekend.

With openside flanker David Pocock and winger James O’Connor also back in the team after recovering from foot and hamstring injuries respectively, coach Robbie Deans said the side was the strongest he had available.

“Hopefully [Cooper and Genia] will click back into gear,” the New Zealander told reporters. “They enjoy playing together and other players enjoy playing with them.

“It all comes down to what we do. We’ve had that jolt, but you can’t presume that we’re going to be better for that.”

Kurtley Beale, who kicked the long-range penalty to secure Australia a 41-39 victory in their most recent meeting with the Springboks last year in Bloemfontein, returns to the starting line-up at fullback.

Where’s your head at
If Australia’s confidence has been dented by the Samoa embarrassment, it was not evident when Cooper, O’Connor and Beale faced the media at the team’s training camp.

The trio exchanged banter about who would have the kicking duties — O’Connor has been given the nod — and gave every impression of being relaxed and excited about the challenge ahead.

“For us, we’re looking forward,” O’Connor said. “South Africa have got a lot of depth and that’s where our head’s at.”

The Faingaa brothers — hooker Saia and centre Anthony — were named on the bench along with back rower Scott Higginbotham to boost the Reds’s contingent in the 22 to eight.

Matt Giteau, who started at flyhalf against Samoa, was omitted altogether with Deans relying on the ability of Beale and O’Connor to take the playmaker role if necessary.

Deans dismissed any thoughts that the Springboks — who left 21 frontline players behind in South Africa — might present a weaker challenge than usual and Beale concurred.

“We learned a lesson at the weekend,” Beale said. “We just can’t take teams lightly and this is a good opportunity to redeem ourselves.”