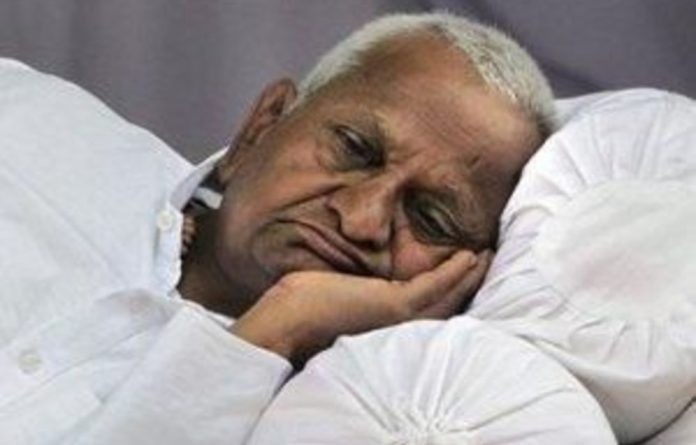 Sipping coconut water and honey, a self-styled Gandhian anti-corruption reformer ended a hunger strike on its 13th day on Sunday that had sparked India’s biggest protests in decades, besieged the government and ushered in a new middle class political force.

“It’s a proud moment for the country that a mass movement which was carried out for 13 days was peaceful and non-violent,” Anna Hazare in a crisp white kurta smock and cap told thousands of cheering supporters from a stage at an open ground in New Delhi that has become the epicentre of a nationwide crusade.

After initially arresting Hazare and dismissing him as an anarchist, Prime Minister Manmohan Singh’s government caved in to the demands of the 74-year-old veteran activist as Parliament backed anti-graft legislation that met many of his demands.

Hazare has tapped a groundswell of public anger against endemic corruption, uniting the country’s bulging middle-class against a hapless political class and underlining voter anger at Singh and the ruling Congress party.

A crowd of supporters cheered as Hazare arrived at a hospital in Gurgaon, a city outside New Delhi, where he will be kept under observation for at least 24 hours and has been put on an intravenous drip after losing over 7.5kg.

None of us could manage what he did. He is a true leader and this country needs him,” said Pankhuri Singhania, a 27 year-old beautician cheering at the protest site.

Hazare’s team of aides called for a mass celebration on Sunday evening at India Gate, a symbolic archway in the centre of New Delhi.

Tens of thousands of mostly urban and wired voters across India celebrated the achievement of an unprecedented movement that may usher in a new force in Indian politics and damage the ruling Congress party in crucial state elections next year.

The veteran activist, whose health has seriously deteriorated, said that he would break his fast after a special session of Parliament saw lawmakers backing a resolution by Finance Minister Pranab Mukherjee to push for a law to create an independent ombudsman with wide-ranging power to investigate lawmakers, the judiciary and bureaucrats.

Undermined by graft scandals and seen as out-of-touch with voters battling high inflation, Congress’ failure to deal with Hazare’s campaign before it flared up into a national issue spells danger for the ruling party in state polls next year ahead of the 2014 general election.

While protests in India are not uncommon, the sight of many well-off young professionals using Twitter and Facebook taking to the streets of Asia’s third-largest economy suggest an awakening of a previously politically-ambivalent middle-class.

‘Victory to mother India’
“Anna wins it for the people,” splashed the front page of India’s Sunday Times newspaper, as grassroot activists across the country revelled in victory after Parliament gave its support to many of the activist’s demands late on Saturday.

Supporters surged to Hazare’s protest site in a sea of saffron, white and green from nearby metro stations on Sunday, as smiling protesters with the national flag painted on their faces chanted “long live Anna” and “victory to mother India”.

“It is a historic day,” said Aamir Pratap (37) who brought his wife and three sons to the site in central New Delhi.

“Anna and the whole country succeeded in uniting the Parliament yesterday for such a crucial Bill.”

Mukherjee announced Parliament’s support for Hazare’s demands after over nine hours of fervent debate in both chambers of Parliament that highlighted just how much the activist’s campaign had rocked India’s political establishment.

Hazare’s trademark white cap has been sported by thousands of protesters across the country, and the slogan “I am Anna” has become a rallying cry for a generation of young people disillusioned by their graft-stained politicians.

Hazare is not some out-of-the-blue phenomenon, however.

Deep-seated change has been underway for years in India as its once-statist economy globalises, bolstered by a widely used freedom of information act, aggressive private media and the election of state politicians who have rejected traditional caste-support bases to win on governance issues.

After a botched arrest as part of a hardline approach to Hazare, a government U-turn saw ministers praise the activist, suggesting a leadership deficit in Congress without party head Sonia Gandhi, who is recovering after surgery for an undisclosed condition.

Congress pledged a slew of economic reforms after winning re-election in 2009 that would have made foreign investment easier and tax collection more effective. But graft and anger over inflation has stymied attempts to debate the legislation.

Transparency International rates India in 87th place on the most corrupt countries, according to a 2010 survey.

Several scandals linked to the government, including a bribery scam involving the granting of telecom licences that led to the arrest of a telecoms minister and may have cost the state up to $39-billion in lost revenues, led to Hazare’s latest protest.

Congress has staked a large amount of political capital on victory in next year’s state election in Uttar Pradesh, India’s most populous state, where a disappointing result would ring serious alarm bells for the federal ballot in 2014.

Hazare became the unlikely thorn in the side of the government when he went on hunger strike in April. He called off that fast after the government promised to introduce a bill creating an anti-corruption ombudsman.

The so-called Lokpal legislation was presented in early August, but activists slammed the draft version as toothless because the prime minister and judges were exempt from probes. – Reuters