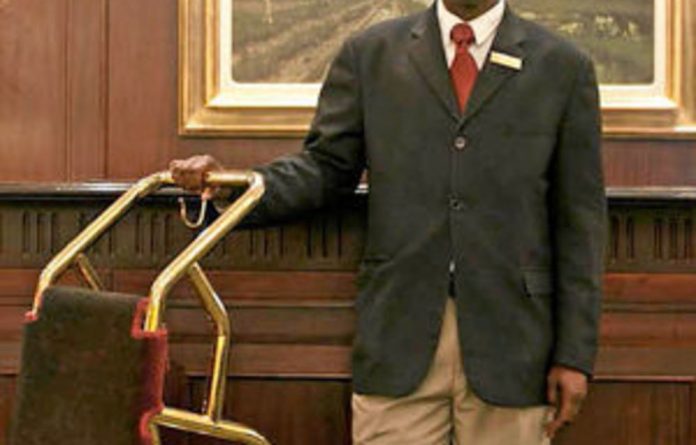 The red-brick building, modelled on a stately old London club appears to be the sage of Bath Avenue. Its rich mahogany and gold trimmings, familiar flowery furniture covers and walls dripping with photographs of early 20th-century miners tell stories of decades and generations past.

The Grace had become a defining symbol of Rosebank and the recent outpouring of sentiment over its demise — it closed its regal doors forever on Wednesday — would make one think that its history reached back to the days of long martini lunches and steamer trunks. But, really, it was too young to pass. At just 14 years old, the hotel never had the opportunity to age in the way its name suggested.

It lived up to its title in a different sense — a dizzying fall from grace — which took it from being one of the most popular places to stay to the first high-profile hotel in the area to be culled as a result of declining occupancy, a sluggish economy and high rents.

The African Sun group, the hotel’s operator, is a Zimbabwean company that operates more than 20 hotels in Southern and West Africa, including the Elephant Hills resort at Victoria Falls and The Lakes Hotel and Conference Centre in Benoni (which also closed on Wednesday). It has pulled out of its agreement to run the establishment.

Hyprop Investments, which owns the building, the Hyde Park Southern Sun and 12 major shopping centres, including the Mall of Rosebank, has not yet found another operator, although it is hoping to secure one by the first quarter of next year. A Hyprop spokesperson would only say that it had been talking to “a number of prospective hotel operators, both local and international, who trade in the boutique-hotel arena who have expressed a keen interest in re-opening the hotel”.

So, for the rest of this year at least, The Grace will lie dormant, a Rapunzel trapped in a tower, with nothing but her glorious hair to keep her company as she waits for someone to rescue her. She will leave only memories of the beauty she was built with when Chippy Brand created and nurtured the hotel like his own child.

Brand, a civil engineer who designed the Sun City golf course and owned the Mount Grace in Magaliesberg and the Cape Grace in Cape Town, was the hotel’s founding father. Unlike those sprawling properties, The Grace had to be different because of its size and location. Instead of welcoming guests into a lavish garden it would have to create tranquillity in a high-rise block, with only a small terrace to offer greenery.

‘Element of belonging’
The only option was to turn it into a home. Guy Steenkamp was hired as the architect to design the building and Brand and his wife, Cynthia, worked on the interior. They concentrated on making the bulk of the reception area a cosy lounge, with couches built for snuggling into, and a fireplace.

They used Gerhard Botha’s paintings of homes in Parktown to add a touch of history and sourced photographs of old Johannesburg and Sophiatown to create memories from another time. The hotel was designed to be a large home and when Brand’s parents moved into a flat across the road, the family regularly ate in the hotel’s dining room.

That’s how they knew that the real element of belonging for guests would come from the establishment’s extended family — the staff.

Charles Lotter, who had worked at Brand’s two other hotels and now works at the Summer Lodge Hotel and Spa in Dorset, England, was hired as the general manager. He kept detailed files on guests and their preferences to ensure that there was always a personal touch. The dossiers included information on favourite foods, drinks, newspapers, whether guests liked to have their bath run for them or their clothes packed away. Most of its patrons were high-powered business people who enjoyed individual attention.

“People wanted the man upfront to know their names and be their friend, acquainted with their lives and willing to listen to their opinions,” Brand said in his biography, Branded by Grace, a memoir of his life as an entrepreneur.

Often, the man upfront was Peter Malesa, who started working at The Grace in 1999 and was the longest-serving staff member when the hotel closed this week.

Malesa started as a security guard but was swiftly promoted to doorman and then porter. “Management saw the way I used to welcome the guests and they saw that maybe I’m an asset,” he said.

Malesa carried bags for former president FW de Klerk, former UN secretary general Kofi Annan and former US president Jimmy Carter, when the hotel was at its most popular, in the early 2000s, when it had just started making a profit. The hotel became renowned for its weekend brunches, a meeting place for residents of the area as well as hotel guests. The eggs benedict with smoked springbok and avocado hollandaise and buttermilk waffles served with eggs, bacon and maple syrup were favourites.

Finically viable
Higher Education Minister Blade Nzimande was a regular visitor to the terrace and the restaurant while Absa chief executive Maria Ramos could often be spotted at the hotel’s highly regarded breakfast.

The hotel’s first chef, Stephano Strafela, who now has his own restaurant at the Falstaff boutique hotel in Sandton, was recruited by Brand. But in spite of its mini-boom Brand called the hotel the “least financially viable” of his properties and, in 2004, he sold it. According to Malesa, when hands changed so did the ethos.

“With the Brands, we were like family. When they left, a lot of the other management and staff also went. Now, business is not like before.” Malesa said some of the personal touches were lost and the sense of family disappeared.

Last year’s Fifa World Cup opened a small window for things to return to their regular bustle, with large tourists groups booking rooms and even R&B singer R Kelly — who performed before the opening game — staying for a few nights.

But on the whole the popularity of the hotel sank, something Malesa said he could not believe had happened. He is on the lookout for work in a similar sort of hotel.

The Grace has been in decline for the past six months, with room rates falling 30%, leaving it lagging behind competitors like Parktown’s Westcliff Hotel and Rosebank’s Hyatt Regency.

It seems that time itself quite literally left The Grace behind. Two weeks before it closed, some locals decided to enjoy a farewell drink in the bar. They arrived to find it deserted, save for a smattering of staff cleaning up. “Sorry, we close at 10,” one of the waiters said. It was 9.15pm.

No-one noticed that the clock had wound backwards at the hotel while it had raced forward elsewhere in the area, creating competition The Grace could no longer beat.

The Rosebank, just a block away, underwent a major revamp in 2008. Its décor went from dowdy to avant-garde and its Circle Bar, with its private pods where large groups meet for drinks and snacks secluded by rings of beaded chains, became an instant hit.

Meanwhile, the Holiday Inn Express at the Zone in Rosebank offers economical rates and the Hyatt around the corner caters to business travellers.

In spite of its elegance, The Grace became nothing more than a façade for something archaic, for which it paid the ultimate price: irrelevance instead of everlasting glory.

Majola set to be cleared

If it doesn’t feature the Indian team, it’s not really cricket