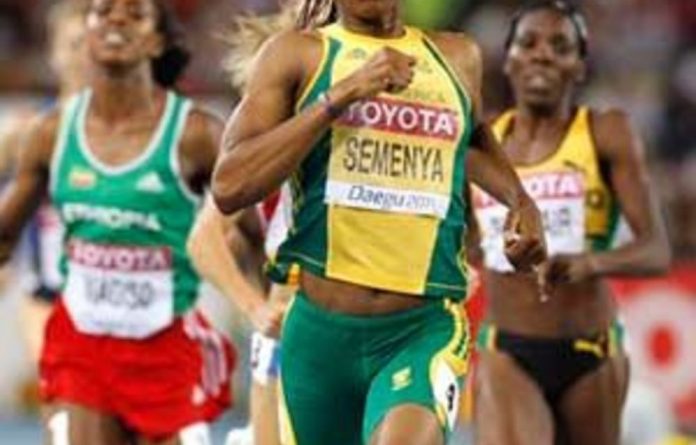 Caster Semenya, looking to put controversy over her true gender behind her, showed glimpses of her old self as she cruised into the final of the 800m at the world championships.

She made her move after 600m, moving steadily through the field into the final stretch where she kept a safe distance from the chasing Ekaterina Kostetskaya of Russia.

Her main rivals, Russia’s Mariya Savinova and Kenyan Janet Jepkosgei, were second and third fastest.
Reigning world indoor and European champion Savinova timed her run to perfection in her heat, coming from the back of the pack at 600m to pip 2007 world champion Jepkosgei at the line.

“I’m pleased because I wanted to qualify for the final,” said Jepkosgei, who is also reigning world silver medallist.

“I won the 800m in 2007 so I am going to do my best against my competitors, especially the Russians.”

Another Russian, Yuliya Rusanova, also impressed in winning her heat in 1:58.73, American Maggie Vessey beating Jennifer Meadows into third, meaning the British bronze medallist from Berlin missed out on a spot in the final.

After her win in Berlin in 2009 Semenya found herself the target of seedy allegations that saw her cast into limbo because of doubts over her gender.

But she was cleared by the sport’s world governing body, the IAAF, and largely accepted by her peers.

Semenya, who clocked a jaw-dropping personal best of 1:55.45 in storming to victory in 2009 Berlin worlds, was stood down soon afterwards and remained on the sidelines until July 2010.

The University of Pretoria student was revealed to be a hermaphrodite after the leaking of test results following her 800m win in Berlin.

The incident generated anger from the South African public and government, who rallied behind the athlete, and sparked a major gender review by the IAAF, which in April introduced new eligibility rules for women athletes with excessive male hormones, a medical condition known as hyperandrogenism.

Semenya was cleared to compete as a woman in July 2010, nearly a year after she shot to prominence.
Coming into the Daegu worlds there were doubts over Semenya’s fitness after manging sub-2min times just twice in 13 outings this season and also having pulled out of the recent World University Games in China with a back injury. — AFP